Hope everyone enjoyed Thanksgiving. It is the least commercial major holiday that we have and usually one that everyone enjoys; of course it did delay my getting my books until Friday. Last week was a glorious week and no matter what this week was going to bring it could not match last week. Still between Marvel and Image the number one issues continue to roll out unabated. Did they all make the cut or not?

But, before we start that let’s first give you the links to next week’s books. On a personal level I have to do a purge of my list again as all the new number ones are crushing me. This is especially true as Marvel rolls out 2 issues of a new book in a month. The clean and easy to review list is here, the detailed list giving you creators and hype is here. I find both lists to be useful in determining what I’m getting. The highlights for me are the return of Before Watchmen books with both Ozy and Silk Spectre, the new Joe Kubert Presents, Batman Incorporated, All New X-Men, Uncanny Avengers, Chew, Fatale, Stuff of Legend and Tower Chronicles, another huge list.

Now let’s get to the six new number ones. 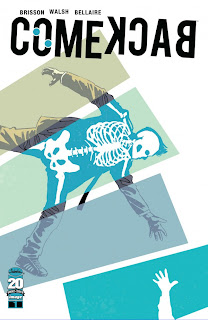 First up from Image Comics is Comeback #1 by Ed Brisson and Michael Walsh. I’m assuming this is a mini-series as the Shadowline portion of Image does not go for unlimited series. They seem to prefer doing a mini-series, check sales and green light a second one if it works. I’m fine with that approach but as a consumer let me know what my level of commitment is going in. Image is hands down doing more to open up comics to different genres than anyone else. In fact science fiction themes are alive and well at Image. The premise for this series is that there is an illegal time travel agency that helps people “Come Back” from the dead. The idea is that a love one dies and you hire these guys to go back and save them from that death. It means staging the death and essentially doing a whole new identity for the person in the future. It is a very cool premise and the first issue was okay, but not without some story structure problems. First we start with a job that goes bad. Now this job plays into the story, but I think maybe establishing what the book is about with a quick successful job would have been better. Also a lot is going on with one agent looking to quit soon, another agent redoing the job that went wrong and people are spying on Reconnect. Sadly the entire issue comes together when I read the blurb for issue #2 which states “An FBI raid throws, Reconnect, an illegal time travel agency, into a panic” and it goes on from there. The book should do the job on its own, especially with a number one issue. I was on the fence whether to continue with the book until I read the blurb since I was a little lost at the end. That should not happen with a first issue, I should be able to read it and have discern that from my reading of the book. Still the premise is very interesting and while time travel is always filled with problems this looks to be a good read. The art by Michael Walsh has a nice noir quality and it takes what is a science fiction premise book and makes it into an almost crime novel type of feel. The distinctiveness of some characters needs to be worked on as Seth and another guy look way too much alike. The basic storytelling is strong and all in all I like Walsh’s style. A strong enough start by two creators I was unaware of before and I will be back for more. 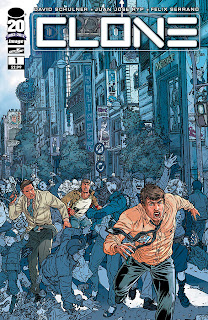 Image and Marvel are the companies with most of the number one issues right now. Image is doing it with just a wealth of mini-series and some unlimited series and Marvel with all the Marvel Now stuff. The next number one is from Image. Clone #1 is by David Schulner and Juan Jose Ryp. This book was my favorite book of the week. Again it has a heavy science fiction theme with a murder mystery thrown in for good measure. First off let’s talk about the art. Ryp is a very good artist who has done extensive work with Avatar and his blood and guts are up there with the best of them. Layouts, design, expressions and readability are all top drawer. Of course he has one habit of dotting for shading ( I guess) and it absolutely made the main character’s wife look a little mannish at times. Since she is very pregnant is was distracting in the first few pages. Our central character is about to become a Dad for the first time and laments that his Dad was never there for him, the reason become apparent quickly. Dr. Luke Taylor goes to work and finds that another version of him lying in the lab shot. At the same time a third version of him has kidnapped his wife. Fortunately the second version of him is willing to help him find his wife. So begins the unraveling of Dr. Luke Taylor’s life and a struggle is trying to keep the pronouns straight. For a first time comic writer I thought this was excellent. Image is two for two. 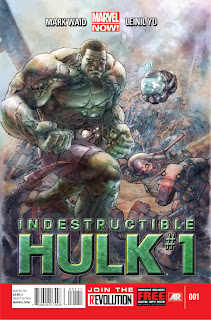 Next up is Marvel with Indestructible Hulk #1 by Mark Waid and Lenil Yu. Marvel rolls out so many number one issues that I think the adjective game helps make it seem to be more of a difference then it is. Eventually this will lead to some odder and odder sounding titles like the Pretty X-Men or something else. Of course it is all about the illusion of change. To their credit Marvel has made a concerted effort to make these books new fan friendly. Since I fall off Marvel books frequently I appreciate the effort and this book makes me want to sign up for a little while. What I enjoy is that Mark Waid comes into a book with a plan that you can see from the jump will give us a different take on the character and sets up a premise that can last for years. The hook this time is Bruce Banner accepts he is going to always be the Hulk and he needs to manage it. He bribes SHEILD with promises of inventions in exchange for their help in giving him a lab and pointing the Hulk at the bad guys. Lenil Yu is a very good artist, but I have never been a huge fan of his style. It is not off-putting; it is just not my favorite. His skill and draftsmanship is obviously superior, but not an artist I follow. The book for me is sold by Waid as he does it all with setting the premise, giving us some action, foreshadowing the obvious problem all within the first issue. 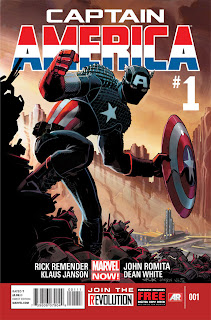 Marvel also brings us Captain America #1 by Rick Remender, John Romita Jr and Klaus Janson. I enjoyed large portions of Brubaker’s run on this book and it will certainly go down as one of the more successful runs. Remender had a hard act to follow and I loved what he did with the first issue, he changed the entire tone of the book. Captain America is having his ninetieth birthday, due to being frozen and the super soldier formula Steve Rogers looks great. His girl friend wants him to get married and as he is contemplating that on a mission they have to separate and Cap gets captured by Arnim Zola. A wonderful introduction to what promises to be Remender’s take on a lot of the old Jack Kirby work. Plus they are saying Cap is trapped in Dimension “Z” which allows this book to stand on its own. Heck with a quick nod that time moves differently there and Cap can have a yearlong adventure and get back in time for dinner with Sharon and still dodge the marriage proposal. Romita’s work is always good in the beginning, but deadlines seem to make his work get looser and looser, so with Klaus Janson aboard it should be fine in the art department. It is funny I enjoyed Brubaker’s take, but a clean break was needed and Remender started out with a solid hit. 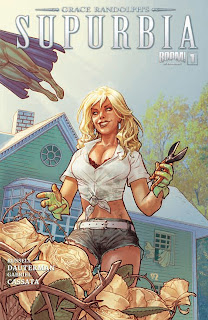 Supurbia #1 is from Boom Studios and is by Grace Randolph and Russell Dauterman. This is the unlimited series that follows up a four issue mini-series that I missed. I had read some good things about it and decided to try it out. I’m glad I did, this book has humor and is just out and out fun. The basic idea is that the super hero set all live in their own little suburban community. Think JLA meets Desperate Housewives or something of that ilk and you get the gist of the idea. We have a Superman clone being bitched out by the Lois stand in since this guy is shacking up with some criminal girl. The Batman stand in is married, but having a gay affair. A house husband is stuck with the wives of the other heroes and it is just hilarious on a lot of levels. I ordered the trade, especially since for 4 issues it is only $10. The art has a nice cartoon feel to it, yet still maintaining a decent realism and super hero type quality. Let’s face it many of our favorite comics are soap operas in disguise, this book just makes in more obvious. 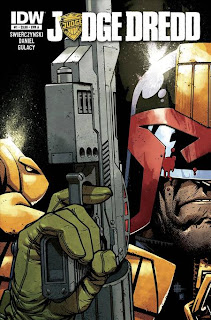 The last of the number ones is a character that has a long, long history and yet can never quite make it big in the USA, as IDW brings us Judge Dredd #1 by Duane Swierczynski and Nelson Daniel as artist on story #1 and Paul Gulacy on story #2. Not going to get long winded here just a couple of things to say. First off Duane gets Dredd right and both stories were enjoyable with terrific art. Second is that IDW is promising to re-publish a lot of Dredd stuff including an “Origins” story I didn’t know about. This story is suppose to explain how we got to the mega-cities type of world. Also the background material told me that Dredd has aged just as long as the series has been published and he is now 35 years older than when the  series began. I love that idea and wish all heroes would actually age and get older as opposed to being young forever. If you are a Dredd fan, you should love this book, if you are not; it is a good place to try it out for size.

So the number one books are six for six as I’ll be back for second issues and more on all of them. A good start to what looks like it could have been a weak week.