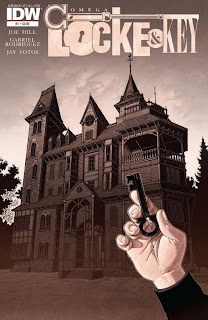 Locke and Key Omega #1 by Joe Hill, Gabriel Rodriquez and Jay Fotos becomes the last arc in what has been one of the best series ever done.

I understand that is a bold statement when you talk about Sandman, Scalped, All Star Superman, the original Doom Patrol, Planetary and the list goes on and on, but Locke and Key deserves be in the discussion. What is great about this book is that even once this story is completed I believe there are still a ton of stories to be told about the Locke house.

If you have not been following the story before now I believe that you could still pick up the series with this issue. The basic premise is set that the demon from another dimension that had taken over a character named Dodge now inhabits Bode, the youngest member of the Locke family. Bode is in possession of the Omega key and plans to open up the home dimension of his kind and allow all the demons into this world. While you may not be as vested in all of the characters as I am, you can still enjoy the bulk of the story.


What has made this series so enjoyable is the richness of the back story and the fully developed characters that are at the heart of the story. Over the course of the series we have learned about the keys that can open your head, turn you into ghost, turn you into a giant, change your gender, allow you to do many things. As the series has progressed each character has grown and has learned more about themselves. Now to see Bode possessed is tough as he starts off this issue by murdering people who saw him as a giant. A great bit this issue was one guy was filming people asking about their biggest high school regret and it added more insight into each of our characters. At this point you truly want to know if they can stop Dodge and can they save Bode since they are unaware the danger exists.

The art by Gabriel Rodriquez has been excellent. I love that the book has breaks so the team of creators who have started the book are still the only ones who have worked on the series. Rodriquez has been called on to portray a wide array of characters who are all each instantly recognizable issue to issue. He has had to draw underwater scenes, giants, violence, ghosts, interior of the Locke mansion and everything else. Nothing fazes him and each issue proves the quality of his work. Gabriel really has it all with layouts, expressions, shot selection, just a brilliant artist. Having that consistency enhances the quality of a series. The colors by Jay Fotos has been consistently well done never overwhelming or interfering with the art, just acting as a seamless partner in making it look the best it can.

This is a great series about a young cast of characters dealing with a fantastic set of circumstances. I wish someone would make this TV series as the pilot was never picked up.
Posted by Jim at Tuesday, November 20, 2012