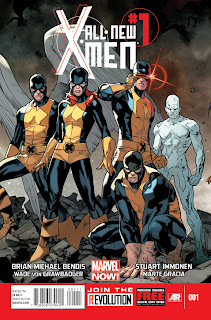 The All New X-Men #1 by Brian Bendis, Stuart Immonen and Wade Von Grawbadger promises to be one of the oddest series yet. The whole premise is fraught with peril and headaches as we are mixing up time travel with super heroics. Of course it is comic book stuff so it looks to be one for us to just having fun and go along for the ride.

The problem with time travel is that once you accept that any sort of time travel is real the first question is how come no one has come back to visit us from the future. The answer can always be our time was too boring for them to bother. The next question is that if someone travels to the past and changes time how would we know anyway as we are only aware of time as a linear thing. That is why in order to enjoy time travel type of stuff you have to throw a lot of logic out the window and just enjoy the ride and see what the author wants to do with it. As the writer has full control and can let the impact be as far reaching as creating a new Universe to just impacting the story a little.


I love moving forward and this book seems to be a return to the past, but I enjoyed it. While Marvel’s characters are all very long in the tooth it will be interesting to watch the younger versions of the X-Men meet up with their current incarnations. The Beast gets to see himself as a  humanoid animal hybrid, Cyclops gets to see himself as a radicalized mutant revolutionary who is allies with their greatest foe, Angel will meet this blank cipher of himself, Jean Grey will have to confront that she is dead and Iceman will shocking find that he has hardly changed at all.

This issue itself was all setup as we move out of the AvX storyline into the current status quo. The Beast and others feel Cyclops and his group is setting back any advance in mutant and human relationships by his actions. The Beast decides that only a young Scott Summers can help talk an older Scott Summers off the proverbial roof.

As a first issue it does all the things it needs to do in setting the premise and then preparing the stage for the story. Almost all first issues in today’s market are the opening chapter in what promises to be a five, six, 12 or whatever story arc. Therefore in a sense nothing really happens in this issue other then the Beast going back in time to recruit his old friends to help him in today’s time. My favorite line is from Iceman who says “Is it our kids” harkening back to the “Back to the Future” films.

As a long time comic book fan I’m looking forward to seeing how long this story line will continue. The first problem of course if this happened doesn’t the current Scott Summers already know what he told himself. Time travel makes my head hurt. I’m wondering going in how long does the premise of this series allow the book to go. Can we just have an unlimited series with a second group of the same characters from different times set in the same time? Why not, it is comic books and if you can tell and good a story and it sells logic be damned, full speed ahead.

Of course the other peril to this type of series is that Marvel has the sliding scale of continuity that everything happened but only with the last ten years or so. This means these X-Men are from the year 1995 at best which makes the characters very different from the 1960 versions of the characters.

The bottom line is this book was a fun read, Bendis dialogue was well done and felt better than his Avengers work. Immonen’s art as always is very good. This looks to be a fun series that could have a big impact on the Marvel Universe and may be the precursor to maybe making a significant change in the MU, I doubt it but always have hope.
Posted by Jim at Monday, November 19, 2012