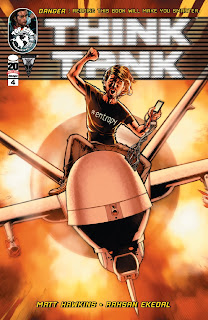 What I love about Think Tank #4 by Matt Hawkins and Rahsan Ekedal is the background material and Matt giving us links about some of the stuff he throws at you during the course of the story.

Our story is about David a super genius the military uses to make weapons. He has grown tired of being someone whose technology is used in killing. So he has decided to escape from the military with his girl friend as she was being held captive by the military.

This entire issue is how David had planned everything out with is escape. Matt throws in stuff about Drones, metalstorms, carbon nanofibers, EMP grenades, light chameleon suits, military golf courses, threat assessment and more. It is all seamless woven into the story. After you have finished reading he gives you references to read up more on your own and tells you what stuff he just made up for the story.

It is an engaging fast paced and well told story. The great twist at the end is that the girl he escapes with actually works for the military. The brass allowed the entire escape to give David a chance to blow off steam, but have an agent under cover (and under the covers) with him to keep the asset in check.

The artwork by Rahsan is passable but needs work. It just feels a little less professional then many books. It would probably be helped out a lot if they moved to making the book in color. I feel like he is a young artist and his style is still evolving so I have high hopes he will improve over time.

Bottom line I’m glad this series has done well enough that is now an unlimited series and is not over with issue #4. A fast paced book full of cutting edge science that is fun and educational.
Posted by Jim at Monday, November 19, 2012