There was a point this week as I was reading my books that I thought I could have a week where nothing was going to be best of the week. There would have been a book listed at the top, but I was feeling nothing was going to be that special. Of course I try to put what I think the best 10 books for the week towards the bottom of the stack, so I should have had a little faith that a true top book would show up and it did and it had competition. 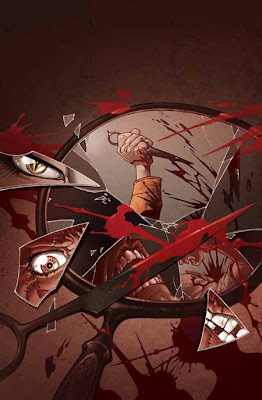 Locke & Key #3 – Writer Joe Hill, Art Gabriel Rodriquez, Colors Jay Fotos. This series has so much going for it that I really can’t help but want to go out and buy Joe Hill’s prose novels as if they are half as good as this story they will be well worth my time. This issue focuses on 15 year old Kinsey and how she is trying to cope with a myriad of issues. First she is growing up, second she is the new kid in high school, third her father was murdered by a psychopath who has now escaped from prison and finally her little brother is very odd. This is a horror story, mystery story, drama and a coming of age story all at the same time. The art by Gabriel Rodriquez is very well done. He mixes up his panel layouts and points of view to help tell even more of the story. His use of body language to express Kinsey’s reluctance to try and be friends with another girl was well done. His style has a realistic edge with a cartoonist touch to it that is a great style. I don’t say enough about the colorist because I have less of an idea as hard their job is, but whenever I see Jay Fotos name I know it will be a plus for a comic. IDW has a real winner on their hands with this series.
Simon Dark #7 – Writer Steve Niles, Art Scott Hampton, Colors Chris Chuckry. I 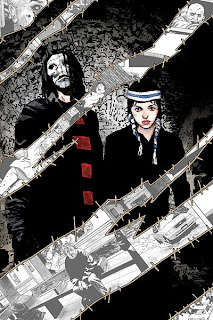 absolutely loved this issue. The story really takes off with the bad guys putting some sort of demonic like creature into soap bars and the creatures then bite and enter the person. That person then becomes a cold blooded homicidal maniac. There is a great scene where a guy’s wife pushes him out a window of an apartment building and she jumps after him and they crash into a car. This is a good as time as any to say the Scott Hampton is outdoing himself with the art in this book. The actual look and style of the art is great and the layouts and design of the pages are fantastic. Scott has created an atmospheric quality that no other comic can match. We also learn that Simon Dark has a specific purpose and it appears to be he may have the key to stopping this group from spreading these creatures. This book deserves your attention. 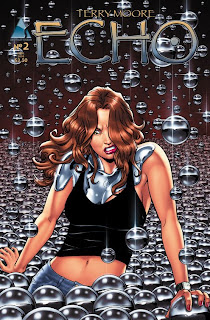 Terry Moore’s Echo #2 - Story and Art Terry Moore. This series is progressing very nicely. This issue Julia goes to the Emergency Room to see what the heck this metal is on her skin. She goes to get into her truck and all the pellets on her truck gravitate to her body and increase the amount of material now sealed to her skin. The hospital thinks she is playing a prank, but she has no clue what is going on. We know that it is the suit that was on Annie and as the pieces come together it is reforming on Julie. I assume that ultimately Julie will be able to hear or sense Annie, hence the title of the book. Still the owner of the suit knows someone was there when the suit rained down on the land and has sent a young woman Ivy out to find who was on the ground when the accident happened. Ivy is obviously a bad a** and she will be after Julie. This is such an easy read, yet it accomplishes so much and the art work is great. I’m just becoming a Terry Moore fan, but I may have to go back and get Strangers in Paradise now. I find that I’m enjoying stories that actually have a beginning middle and an end more and more.

Scalped #16 – Writer Jason Aaron, Art R. M. Guera, Colors Giula Brusco. A week late for me as my store was shorted on Wednesday and that’s when I pick up my books. This was another strong issue of what is one of the best series on the racks. While I would not make it a best book this week, it sets the concluding chapter very well. Dead Mothers has been the best arc that this series has done. This issue we see Bad Horse is looking for the guy who killed the young boy’s mother outside of his jurisdiction. He has no luck and returns to the reservation to see his young friend off. Later when pulling over two drunks he sees a gift he gave the boy in the back seat of the car. After “gently” asking them what happened he finds out he has gone after the killer himself. Dash Bad Horse goes to stop him. In the story line about Bad Horse’s mother we see the FBI agent in charge of that area go to Red Crow and just push him and push him and push him. Since he is an FBI agent Red Crow has to just seat there and take all the crap this guy is dishing out. As he leaves and goes down towards his office he sees two casino employees holding a man and asks why. They tell him he was cheating. Red Crow takes out all of his rage and frustration on the man until his body guards have to pull him off what it left of the man. Not only the best straight dramatic book on the market, but arguably one of the best series period.

Batman Confidential #16 – Writer Tony Bedard, Pencils Rags Morales, Inks Mick Gray and Rodney Ramos, Colors I.L.L. This was a very good ending to a really nice story arc. I like that it ended with the new Wrath in Blackgate prison so that he can be used one day again to be part of Batman’s rogue gallery. I enjoyed this arc enough that if they put it in a hard cover and add the original Wrath tale as a back up I would pick it up. This issue was a great action issue with Batman and Nightwing chasing after the Wrath and the Wrath turning the tables on them with his Wrathmobile versus the Batman mobile. It also highlights Dick’s detective skills and had a good showdown to end the issue as Nightwing and Batman took down the wrath.

I thought this was a decent week of books. I only had four books below the line and nothing got cut from my list. Locke & Key hit the top of the charts for me and I believe it was number one for me once before. This is an excellent series from IDW and I would recommend that if you haven’t tried it out, find this issue and read it.
Posted by Jim at Tuesday, April 15, 2008