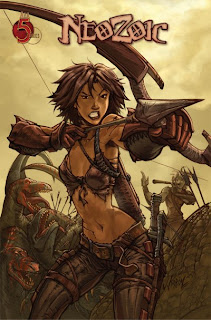 The walls of Monanti city are smashed, and the lives of millions are trampled beneath the feet of relentless dinosaurs. The Predator Defense League tries to stem the tide. The King finds his family kidnapped.

But is Lilli to blame? When both father and mentor turn their backs on her, the emotional show-down turns deadly.

This book is awesomely cool. I am amazed at how much has happened over just four issues.


First I'd like to say that this is my second favorite Neozoic cover so far. I'm a fan of archers, so that helps, the the dynamic of the cover itself makes me want to read the book. I know, never judge a book by it's cover, right? But in comic books, covers can make a difference in how well a book sells. And this cover rocks. Not only does it serve to foreshadow the events of this issue but it also highlights a major character and draws in potential readers. And, it's cool looking :) Props to J Korim and Jessie Lam. Issue #5 is the best cover so far though ;)


As I said, a lot has happened in this story so far, but even more happened in this issue. Lilli certainly has a rough time of it and I'm curious to see how she'll cope with it. We also get to see how hard the city is getting hit and how the rest of the cast is coping. In all honestly I had to read this issue more than once in order to understand all of what was happening. If this book has any weakness it's that it doesn't stand well on a single issue basis at the moment - that's easily forgiven since I own the previous issues :)


I just out and out enjoy this book. Neozoic throws the reader into a new world without much preparation but the story is both surprising and addictive. This pulls the reader in and helps to shrug of (and even to enjoy) the culture shock. One is especially captivated by Lilli and the little girl she is trying to save. I can't wait for the next issue - and I encourage everyone to give this book a try! 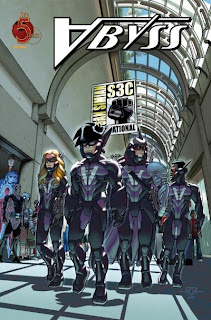 Eric, Arrow and Shaafte find Abyss' secret lair, the kidnapped Quiver, and the ultimate target the super-villain's plan... the San Simian Superhero Con. Only by becoming bad guys can the the good guys stop the bad guys who look like good guys - while the fate of 100,000 fans hangs in the balance.


Over the course of four short issues this book has gone from flaky to fun and even heartfelt (in a sarcastic manner of course - but heartfelt none the less). I really enjoyed this issue, and while I'm still not the biggest fan of the artwork it's grown on me - and I also feel it's improved since the first issue.


This was a nice wrap up to this story arc with Eric becoming a hero in his own right. It keeps it's humorous tone but doesn't overdo it. The action sequences are fun and the dialog is well timed and paced. I really liked the coloring on this book, the light work on the cover especially stood out.


Overall I'd like to see this book as a trade. It ended up being a fun story when it was all put together and everything fell in place. I hope to see further stories about these characters.


On a side note, I had a random encounter the other day with a comic book artist. I complimented a customer at the store I work at on his sweet Atomic Robo shirt. He asked me if I read Atomic Robo and we got to talking. Apparently he's an acquaintance of Brian Clevinger and was the artist on one of the Robo backup stories. Here's his website if anyone wants to check him out, I just thought it was neat to run into him like that.