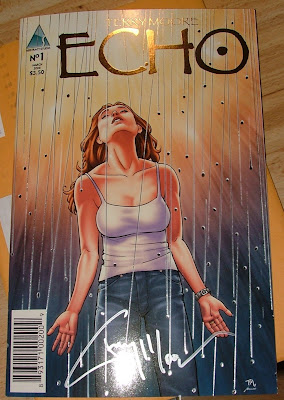 Echo #1 - Story and Art Terry Moore
Seeing as this is my first review (and my first time posting here), it seems a brief introduction is in order. Hi, I'm Jen, and I read comics. I'm currently in my last month and a half of graduate school, so my hobby has been neglected lately. I've been reading comics since I was a kid (whenever the X-Men cartoon first aired, it introduced me to comics). While I still love mutants, I've also embraced the wider comics industry as I got older, which is a nice segue into this review.
I love Strangers in Paradise. There, I've said it. I had wanted to read this comic for several years but was never able to find the first trade, so I kept putting it off. Then Terry Moore released the pocket book version of his opus and I was hooked. I say this in the spirit of disclosure, as it's my enjoyment of Moore's SIP that led me to purchase the first issue of his new series, Echo (yes, I preordered it from his site and received a signed copy; yes, this is the first chance I've had to read it—grad student, remember?).

Before getting into the story, I just want to mention the cover. Moore both writes and draws this series, so the cover is the first taste the reader has of this story. The little details (such as the subject's wedding ring) and Moore's realistic portrayal of women are part of what draws me to this series (though I admit the shiny foil-highlighted cover certainly helped). This is a cover I really connected with, in the sense that I have also stood face-upturned to the rain. The cover gives very little away, assuming you accept the silver "rain" as artistic license rather than a comment on what is falling from the sky.

This book opens with an image and a quote, which together suggest the conflict between nature and technology. After this single page, the story begins with a weapons test, featuring test pilot Annie. Annie is testing a new protective suit, while zipping around like the Rocketeer. While she is satisfied with the results, her superiors believe one last impact test (of the suit, in flight, on Annie) is in order. Despite Annie's efforts, her superiors get their test, ending with an explosion over the desert. One of Annie's last thoughts: she's wearing a nuke.

Below, Julie is photographing the desert scenery. Her focus shifts to photographing the explosion, until she is hit by bits of the test suit. This globules stick to her skin and her truck, sending her racing home.

Annie's superiors (who appear to be at least affiliated with the military) visit the scene of the fallout and examine the damage caused by their impact test. We briefly meet a California Park Ranger, who attempts to keep the military out while he investigates the accident. While his scene is brief, I hope we see more of Dillon, whose interference technique is classic. At the end of this scene, we learn that Annie's test suit was the nuke.

Julie arrives at home. She finds a larger piece of the test suit in the bed of her pick-up and brings it inside. While listening to her messages and talking to her dog, she fits the suit piece onto her shoulder; the bits of the nuclear suit that clung to her skin begin to move, joining up the with the larger piece on her shoulder. The issue ends with Julie looking horrified at the piece of suit that now covers her shoulder and upper chest.

This story is told in black and white. While this choice can bother some people, I'm actually a fan of B&W work. It let's me better appreciate the line work, and in some cases actually makes for better story-telling. While the colored cover demonstrates that Moore's work looks great with color, I enjoy his use of B&W on the interior pages. His story telling is strong enough that it doesn't need further definition with color. Moore's work is full of realistic (and visually different) characters and detailed (though not dense) scenery; the lack of color makes these qualities more apparent and appreciable.

Moore manages to create interesting characters in brief periods of time. Dillon, the park ranger, is only present for two pages, but I find myself wanting to see him again. I've also gotten a sense of his personality, through his lop-sided grin and his attempt to dissuade the military from their investigation. The wedding ring that I noted on the cover gains meaning when Julie listens to her messages, and we learn that she is going through a divorce. Annie appears to be only a brief character in this series, but we see her desperately trying to save the people below from the fallout of the bomb, rather than simply saving herself.

Overall, I found this book to be an enjoyable introduction to this new story. If you enjoy Terry Moore, then you'll find this book intriguing. If you like science fiction, you'll find this story interesting. If you don't like either of those things, then this book isn't for you (also, if you love sci-fi but hate Moore, then you probably won't buy this book, but you likely know that already). I love Moore's artwork; while there is nothing new to it here, there is nothing lacking either. His realistic people and attention to detail are part of what I enjoy about his stories. This issue is entirely set-up and an introduction to at least one main character, so I am not really sure yet where this will ultimately go. This has the potential to be a very interesting story, about the conflict between nature and technology, between the military and civilians. This issue is the first part of a much larger story; it has achieved its goal of making me want to know what happens next.

Thanks Jen, great review. We hope to get Jen as a once in awhile contributor to the blog in the future.
Posted by Jim at Friday, April 11, 2008