An Endless Stream of Words 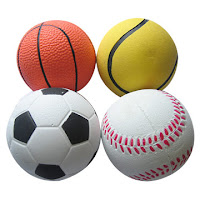 As the kids have become more articulate, it seems like the house is filled with an endless slew of words. And, as you know, children do not have an "off switch," so whatever thought comes to their little minds also comes out of their mouths. This has lead to all sorts of interesting conversations!

Let's focus on what the Boy says. I mention him because Boy has discovered sports and sports talk. Football, baseball, soccer...you name it, we play it, and we talk about it.

We play whatever is in season, and Boy likes to keep score. Now scoring is another grand adventure, but let's just say he "wins" most of the time. Because he "wins" so much he likes to talk about that too. In fact, he told his teacher how much he likes to play and how often he "wins."

How do I know this? Because the other day, I was confronted with a sad little boy. When I inquired why the long face, he informed me, "Dad, I have to let you win when the next time we play baseball." 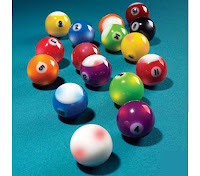 You can imagine how such a comment would pique my interest! "Oh really?" I responded. "Why is that?"

I should have known better, but I deserved the response I got. "Well, I told my teacher that you weren't very good at baseball, and I beat you all the time. My teacher says it would be nice if I let you win sometimes. I'll let you win today - OK?"

As I ground my molars to dust, I managed a "That's very nice of you. Thank you for letting me win."

Discovering that it's nice to let Daddy win isn't the only thing he's learned at school. For example, the other day he learned he had “balls.” 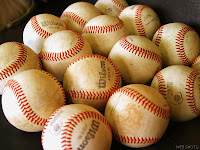 Don’t get me wrong, this is no real surprise because we have talked about parts of the body. We’ve even talked about why girls and boys are different. Because Boy and Girl are twins we’ve had that talk sooner than I would have liked but we’ve already had it. And, of course, we used real words like "testicles" to describe his body parts.

Anyway, I got home from work the other day and was promptly greeted by my son who announced “Dad! Guess What! I have balls!!” Maybe I should clarify this because greeted is a strong word. I was at the front door, and Boy was two rooms over shouting at me over the sound of the television. It was more like a 10 decibel “DAD! GUESS WHAT! I HAVE BALLS.”

And, let me tell ya, nothing makes a bad day better than having your son announce he has balls. He was so excited about this discovery that I’m surprised he didn’t pull down his pants to show his balls to me. 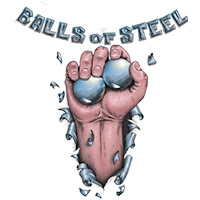 Yep, nothing but an endless slew of interesting words and sentences at our house!
Posted by Lee at Thursday, April 03, 2008