Jim: Well we have finally decided to give Dark Horse and Image there own separate posts every month. It seemed inherently unfair to combine the two as each company really has a different type of identity and deserves their own post.
Lee: Really? When did “we” decide that? But now that you mention it, it’s a good idea and I am glad I recommended it. 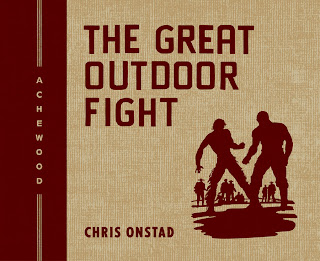 ACHEWOOD: THE GREAT OUTDOOR FIGHT Chris Onstad (W/A) On sale Sept. 10 b&w w/FC, 96 pages $14.95 HC, 9 1/2" x 7 3/4 Since 2001, cult comic favorite Achewood has built a six-figure international following. Intelligent, hilarious, and adult but not filthy, it’s the strip you’ll wish you’d discovered as an underappreciated fifteen-year-old. Dark Horse presents the hardbound edition of Achewood’s The Great Outdoor Fight, the story of “Three Days, Three Acres, Three Thousand Men.”
Jim: Dark Horse is doing such a great job of expanding what we expect to see from them. I feel like Dark Horse is becoming more of a true publisher and comics are now just part of the mix.
Lee: DH is doing a great job of bringing webcomics to the masses. If you’ve never seen Achewood then this is a good way to experience it… or a good way to get it into your collection if you already love it. 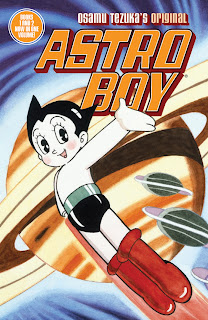 x 6 3/4" Dark Horse proudly presents one of the crown jewels of manga -- Astro Boy! Created by the late Osamu Tezuka, a revered animator and cartoonist (who created over 150,000 pages of comics in his career!) considered the Walt Disney of Japan, Astro Boy was the first manga series to be adapted to animation and became a worldwide phenomenon, making Astro Boy the Mickey Mouse of anime -- a jet-powered, super-strong, evil-robot-bashing, alien-invasion-smashing Mickey Mouse, that is! Exciting, whimsical, and touching, Astro Boy hearkens back to the classic era of comics and animation, featuring stories that readers young and old will enjoy. This special edition combines the first two volumes of the collected Astro Boy, featuring over 400 story pages in one value-priced collection!
Jim: Astro Boy just looks a little odd. Never really liked Astro Boy, but hey a lot of people did.
Lee: Same here. I never understood Astro Boy but people love it. It’s amazing the things DH is finding to print. 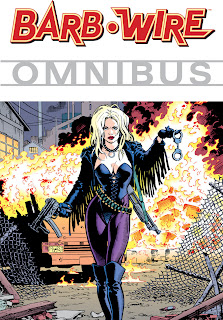 BARB WIRE OMNIBUS John Arcudi (W), Chris Warner (W/A/Cover), Dan Lawlis (A), Mike Manley (A), Ian Akin (A), and Tim Bradstreet (A) On sale Sept. 10 FC, 320 pages $24.95 TPB, 6" x 9"Steel Harbor is a hell of a town, with the emphasis on hell, an urban wasteland of shuttered factories, decaying neighborhoods, and broken dreams. Crime and street violence are the soup of the day every day, but if you’re a bounty hunter, every day in “Metal City” can be Christmas -- assuming you survive, since the worst of the Harbor’s most wanted can fly, summon up tornadoes, or tear cars in half with their bare hands. But a skip’s a skip, and manhunter Barb Wire is the best tracker in the business, and no super-gangster is too tough -- as long as there’s a fat price on his, her, or its head. Beautiful as she is lethal, Barb Wire really puts the “drop dead” in drop-dead gorgeous. Her boots may be made for walking, but they kick butt real pretty too.
Jim: Sadly more known for being one of the worst movies ever made starting Pamela Anderson. The talent on this book says it is much better then that, but I never read it.
Lee: I like that DH is reprinting this material. It has some great art and the stories were good too. It was too bad that the movie destroyed the series. 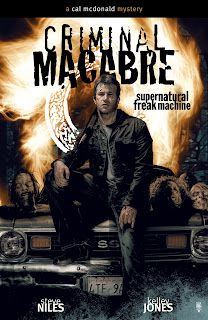 Jones (A), Michelle Madsen (C), Tim Bradstreet (Cover) On sale Sept. 10FC, 120 pages $17.95 TPB, 7" x 10" Escaped mad doctors and possessed muscle cars are all in a day’s work for supernatural investigator Cal McDonald and his undead sidekick Mo’Lock. When an old enemy Cal sent to prison escapes, his sights are set on exacting cold revenge on the guy who put him there. And it looks like he’ll have to cut through everyone Cal loves to get to him . . . perfect!Cal knows what he’s up against, and he’s hardly batting an eye. He’s already put this guy away once, and it’s not like prison makes people bitter, right? And besides -- things are looking up. He’s even got a new car to brag about -- a spiffy 1973 Nova. Too bad the guy who died in the car before Cal bought it has no intention of leaving!
Jim: Easy one for me to buy as I have only recently gotten on the Criminal Macabre bandwagon and I do not have the early mini-series. Steve Niles and Kelly Jones and a character that I have come to enjoy, it is all good.
Lee: Honestly, these look great but the price point is a killer. When are they going to start making cheap trades??? $9.99 anyone? 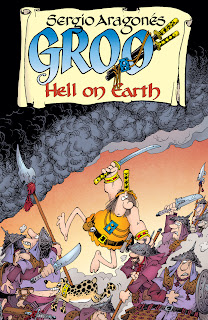 GROO: HELL ON EARTH Mark Evanier (W) and Sergio Aragonoes (A) On sale Sept. 17 FC, 112 pages $17.95 TPB, 7" x 10"Groo is BACK! And, oddly enough, that might not be the biggest disaster looming over the planet. It seems that things are getting hotter everywhere . . . that is, in those places where it isn’t getting colder than ever before! The usual suspects -- Sergio Aragonoes and Mark Evanier -- once again join forces to bring you a sidesplitting tale of the world’s stupidest barbarian. Unfortunately, there might not be much world left by the end of their story!
Jim: Hated the first issue of the series, felt it was not that funny and why too preachy.
Lee: Enough new Groo! I want old Groo… but in a shiney hc. I’m a sucker for shiney hc’s. 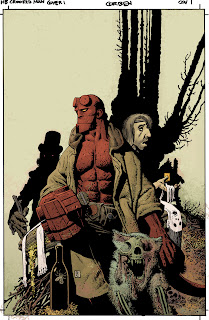 and Dave Stewart (C) On sale July 2 FC, 32 pages $2.99Miniseries In 1956, somewhere in the mountains of West Virginia, Hellboy encounters Tom, a man who in his youth sold his soul to a backwoods demon known as the Crooked Man. Together they travel back into the dark heart of the Appalachian mountains to confront that demon and see if Tom’s soul can’t be saved. The three-issue series reunites Mignola and legendary horror artist Richard Corben (The Bodyssey, Banner, Punisher: The End, Hellboy: Makoma) in a tale of witchcraft rooted in Appalachian folklore.
Jim: Mignola/Corben/Hellboy – A yes for me.
Lee: Good but I can’t keep up with another monthly. Waiting for the trade for me. 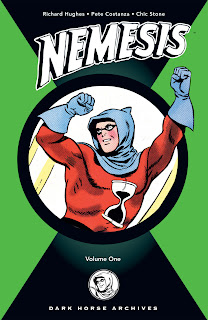 NEMESIS ARCHIVES VOLUME ONE Richard E. Hughes (W), Pete Costanza (A), Chic Stone (A), Kurt Schaffenberger (A), and Scott Shaw (Introduction) On sale Sept. 24FC, 264 pages $59.95 HC, 6 5/8" x 10 3/16" Steve Flint was a crusading private detective -- no crime was too small or too big for him to take on, and the criminal underworld quaked in fear at the very mention of his name. But when FBI Director J. Edgar Hoover asked Flint to investigate the Mafia’s connections to sabotage in the race to the moon the crusading detective took on more than he expected and was murdered by the mob. For most men the story would end there . . . but Steve Flint is sent back from the great Unknown as a spirit empowered by the Grim Reaper, charged with capturing his killers and striking a blow for justice as the ghostly hero Nemesis! • Unavailable for over forty years!
Jim: I cannot commit to a book like this without knowing more about the material. Seems a little on the too obscure side to generate any real sales.
Lee: It's cool that DH has their own Archives line but wow is this hard to justify at $60. Especially for something that doesn't have nearly the cult following that Herbie the fat boy did. 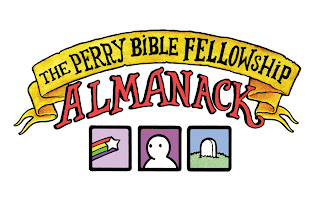 24 FC, 272 pages $24.95 HC, 11" x 8 1/2" This 272-page follow-up to the immensely popular and soon-to-be-out-of-print collection The Trial of Colonel Sweeto and Other Stories will collect the entirety of Gurewitch’s weekly newspaper print run. Also features bonus “lost” strips, sketches, and an interview by Wondermark’s David Malki.
Jim: Again Dark Horse looks for and finds some different material. I wish my store would order some of this on speculation so I could pursue the material before I buy it. I want more of a book store experience.
Lee: I have the Colonel Sweeto collection and I love it. If you miss Far Side then you need to read this. My only question, is there any difference between this new book and that one? 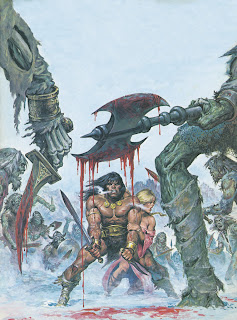 THE SAVAGE SWORD OF CONAN VOLUME 4 Roy Thomas (W) and Various (A) On sale Sept. 24 b&w, 500 pages $19.95 TPB, 7" x 10" Editing and charting Conan’s course in the influential Savage Sword of Conan magazine, Roy Thomas led a phenomenal assemblage of talented illustrators boldly through the end of the seventies and into the eighties, unfettered by page counts and the limiting thumb of the Comics Code. Thomas scripted the continuing adventures of Conan, drawing from Robert E. Howard’s original tales -- along with other Conan adventures -- and working with such esteemed artists as John Buscema, Sal Buscema, Ernie Colon, Klaus Janson, and the amazing Gil Kane! The Savage Sword of Conan brought the world thrilling adaptations of “Sons of the White Wolf,” “The Legions of the Dead,” and “The Treasure of Tranicos.” The real treasure in this massive tome, however, is the sprawling, ambitious adaptation of the Conan the Buccaneer novel by the powerhouse team of Roy Thomas, John Buscema, and Tony DeZuniga! This volume is sure to deliver brutal barbarian violence as well as horrific, chilling surprises.
Jim: Nice to see this material getting the light of day.
Lee: Here's the true test of DH. Savage sword was full of boobies as Marvel experimented with "more adult" material. Will DH leave it in or will we be protected from ourselves.

Jim: That is a wrap on our first solo Dark Horse Preview Review and Dark Horse has a lot of interesting books, trades and new comics on this months list.
Lee: I am amazed at the material that DH finds to print and reprint. They really have some of the most diversified offerings of any of the major publishers.


Over the next two weeks we hope to have a review of the Kid Houdini Free Comic (for Free Comic Day), Robotika Few a Few Rubles More #2 and Sparks #1 - #3 From Catastrophic Comics.
Posted by Jim at Sunday, April 20, 2008