It has been a funny couple of weeks with no books being major producing an absolute number one book like some weeks do. Still a lot of really good issues of series came out and a very enjoyable week’s worth of reading. While I still get a ridiculous number of books the recently culling of about 20 titles has enhanced my enjoyment immensely. I have not felt like I had many comics that I was forcing myself to read because I picked up the comic for some convoluted rationalization. 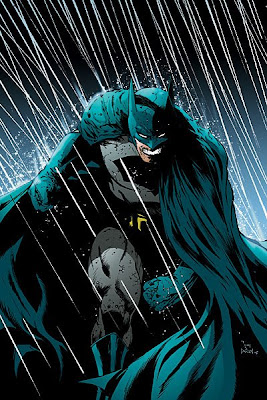 Batman #675 - Writer Grant Morrison, Pencils Ryan Benjamin, Inks Saleem Crawford, Colors Guy Major Morrison has hit his stride with Batman. He brings back the man with ten eyes villain from the silver age (a great Neal Adams cover on that story) and he is now the nine eyed man as he is missing a finger. He appears as a terrorist coming to kidnap Bruce's date of that evening. She has just dressed him down as she is tired of his disappearances and she senses a dark side that he will not reveal. The kidnappers grab her and Bruce and are drag them off into the kitchen. At the same time Dick and Tim are out taking out some criminals and discussing Bruce, Tim is worried that something is wrong. We also cut to Talia, Damien and Merlin as she is also concerned about Bruce. The story ends with Bruce beating the crap out of the bad guy as Bruce and his date realizes that Bruce is Batman. Reminded me a lot of the whole relationship with Silver St. Cloud, but Morrison is probably taking even further then Englehart would ever have been allowed when he was doing his story with Marshall Rogers (side note that story needs to reprinted as a high quality hard cover and dedicated to Marshall Rogers). Ryan Benjamin does a very good job with this story, but it is not in Tony Daniel's class yet. So I missed Tony, but feel Ryan's work is still very good. This is the issue before Batman R.I.P. begins and what a great set-up. More and more Morrison's run on Batman is starting to stand out as one of the great runs on this character.
Northlanders #5 – Writer Brian Wood, Art David Gianfelice, Colors David McCaig. 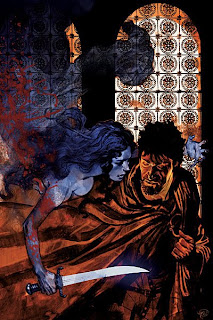 This book is getting better and better. This issue we get the back story on Sven and his life. As a young boy while his father was away his home was attacked and he did not grab a sword to defend his mother. He was only about eight and would have been killed, but his mother who was raped calls her son out as a coward. She tells him he should have died defending the house and that he will never be a man. He rejects the Viking's philosophy and runs away from home and is promptly captured and made a slave rowing a ship. Eventually he makes it to Constantinople and is sold off to a new master and falls in love with his master's daughter. A few years later his master is killed and he saves the daughter (Zoe) from the assassins and she takes over the house. They both grow up and are lovers and friends, but never marry. After a point in time Sven decides he needs to go home, although rich due to Zoe's fortune and living well he needs to go home. We cut back to the present and see Sven is committing to avenging Zoe's death at his Uncle's hands (which occurred last issue) and is now willing to die for that cause. This gives the book a great emotional content and sets up the battle to come. Instead of it being a pointless battle, you know why Sven will do anything now. This was an excellent issue in a series that is getting better with each issue.

Thor #8 – Writer J. Michael Straczynski, Pencils Marko Djurdjevic, Inks Danny Miki and Crimelab Studios, Colors Laura Martin. Thor has become such a wonderful series, that I can’t believe how bored I was with the first three issues. Instead of nothing happening, now the book is full of events and moving the story forward. This issue Thor and Odin come to an understanding of their relationship and Odin passes the mantle of leadership to his son. Thor comes to the conclusion that Sif is lost to him forever, yet we find that she is trapped inside an old woman dying of cancer. At the same time Don Blake and Jane Foster met again (as Jane is unknowingly the doctor to Sif). We have Thor as the leader of Asgard, Don Blake back in continuity and seemly a different yet joined entity with Thor, the evil machinations of Loki (as it appears she is behind Sif being trapped inside the old woman and not being released as the rest of Thor’s people were when he called them back). The art by Marko Djurdjevic is great work, heavily towards the realistic side and is only a notch below the John Cassady class. I hope JLM stays on this title for a long time.
Mighty Avengers #12 – Writer Brian Bendis, Art Alex Maleev, Colors Matt

Hollingsworth. This issue of Nick Fury (it was called Mighty Avengers, but it was a Nick Fury comic) was terrific and since I just read the Secret Wars trade it worked even better for me. We finally find out where Nick Fury has been for all of this time. He knew during Secret Wars he had crossed a line and needed to disappear, as he did he started to realize some things were not right. A person who appears to be the Countess is with him, but he follows her and finds out she is an enemy. Nick kills her and finds out she is a skrull. Since then Nick has been a shadow pulling together information on who might be a skrull, Nick plans to be ready when the sh*t hits the fan. Bendis is at his best with a solo character and more of a set-up story then an action/adventure or group book. This story plays well as one man versus a world that will not believe him. Alex Maleev’s art was superb, Nick had that world weary, yet determined look about him that struck just the right chord. It has to be great as a writer to see your vision realized in such an exceptional manner. I loved seeing Nick Fury come back into prominence and in a very cool fashion.

Fables #72 – Writer Bill Willingham, Pencils Mark Buckingham, Inks Steve Leialoha, Colors Lee Loughridge. How can you not enjoy an issue where we get to see Cindy (Cinderella) go so bada** on Hansel. Hansel leaves Cindy and tells a henchman to shot her once they are fifteen minutes out and then he leaves with Pinocchio. Cindy escapes and then grabs a huge construction truck to crash into Hans get away car. Then since she can’t kill him as too many Mundy’s believe in him, she shots out his kneecaps. The action continues from there and ultimately Pinocchio gets to Fabletown. Next issue we start to see what has been happening with the war. I really love this series and feel this two issue spy saga that was fast paced and loaded with action was a perfect antidote to the last arc, that while well done was overly long and a little drawn out.
Fall of Cthulhu #11 – Writer Michael Alan Nelson, Pencils Matt Santolouco, Inks

That wraps up this week and I’m looking forward to tomorrow to pick up the Adam Strange archives and what appears to be another strong week of titles. On a side note I’m happy to see the Orioles are at least playing well if not outright competitive. I don’t think they are winning anything this year, but I think it will be more fun to see them grow over the course of the year. As for the Ravens the first two draft choices were not what I would call great, but only time will tell.
Posted by Jim at Tuesday, April 29, 2008