Now I’m a big DC fan, but I’m willing to slam them when they are off, but between Batman, Blackest Night’s great start and Wednesday Comics I can honestly praise them with having some of the best products there are on the stands. Now if the Orioles can just play 500 ball the rest of the year and Derrick Mason un-retire from football. 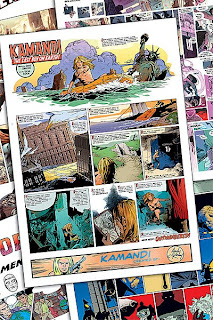 Wednesday Comics #1 (of 12) - Creators – Azzarello, Risso, Gibbons, Sook, Baker, Bullock, Heuck, Arcudi, Bermejo, Busiek, Quinones, Gaiman, Allerd, Berganza, Galloway, Pope, Palmiotti, Conner, Didio, Lopez, Nowlan, Caldwell, Kubert, Kubert, Kerschl, Fletcher, Simonson, Stelfreeze, Editor Mark Chiarello. You have to love when a plan comes together and boy did this plan hit a home run. I always give DC credit for having a willingness to try things and why they may be spectacular failures or meet critical acclaim without sales success or be the smash hit, they are willing to dare to be different. I have found that lately I rather just share the emotional side of the experience when it comes to certain things that I’m reviewing and with Wednesday Comics so much of this was just that a great emotional experience. From the beginning to end the entire experience was a joy, so much so I bothered my wife with my joy by constantly showing her stuff in certain strips, to which she feigned a dutiful interest. After I completed the first issue and refolding it I noticed the editorial credits and saw something that made the whole project ever better and was the icing on the cake the bow on the present, it was dedicated to Archie Goodwin. Goodwin from my outsider’s perspective was always the class of the business and perhaps the best editor that comics ever had. He would have loved this project and from what I read Editor Mark Chiarello deserves a ton of credit and kudos for a job well done. I have always had a love of comics and I have enjoyed cartoon strips and Prince Valiant in the newspapers. As a kid every Saturday I would drive down with my Dad to the newsstand while he brought two Sunday newspapers (yes Baltimore had two viable newspapers then, sort of three depending how you counted as we had a morning and an evening Sun paper and the News American). I would buy my comics (at 12 cents each) and we would come home. In addition to reading the comic books I would grab the Sunday funny pages and open it up to the various strips I enjoyed the most and then go back into reading my comics. As I grew older I read the newspaper for the news and sports and then when I was in banking the Wall Street Journal was my daily habit. Times past, things change, the internet takes over, the only viable newspaper is more of a pamphlet and then we get this gem. I come home and open it up and my childhood comes back, my joy of newsprint comes back, the fun of sitting with a full newspaper in my face, flipping pages, refolding it on itself was all back. See my full review here. 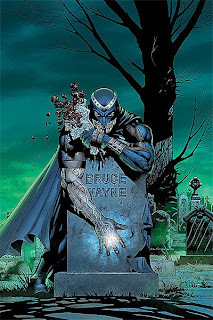 Green Lantern #43 - Writer Geoff Johns, Pencils Doug Mahnke, Inks Christian Almay, Colors Randy Mayor. I have been waiting for Blackest Night to start for what seems like forever. The last year has been slowly building up to it and during that time I was a little alarmed that Peter Tomasi was making the GL Corps a better book then Green Lantern. I mean I have had favorite writers burn out on me before or just have a few misses here and there, but GL and Blackest Night was John’s baby. This book (oddly enough) put all those fears that Johns was losing his edge to rest. The Prologue to Blackest Night was a great book and a stellar start to what looks like an event that could be worth the hype. The funny thing about the book is after all was said and done it hardly had Hal Jordan in it (only as a flashback), it was about Black Hand. John recreated Black Hand and made him into the first Black Lantern. In a coincidence of serendipitous proportions I had just recently read an old 100 Page Flash book from the 70’s and it contained a reprint of Hal’s first fight with the Black Hand. Black Hand cut GL in half and stole half of his power. William Hand was beaten when Hal faked (via his ring) having a whole body. Hal startled Black Hand because no way could Hal be whole and Hal beat someone with exactly half his power. Visually it was a very cool book and the story was not half bad (unintended pun). John’s like the character and kept tiny bits of what he was and reworked him into a sick and twisted guy who is obsessed with death. See my full review here.

Warlord #4 – This book is very close to being cancelled. I will ride out the next issue and maybe one more, by the story is moving way too slow and has too many things going on with the story. It is like Mike Grell is trying to do too much as opposed to just giving us a good solid Warlord story. Add to that the art seem to fall apart this issue and it really make this a hard book to continue to read.

X-Men Legacy #226 – Talk about a throw away book, this was one. The only thing of interest to me was Rogue is apparently back to being human and has control of her powers. I could car less about the second part of this tie-in to Utopia.

Dark X-Men Beginning #1 (of 3) – They are doing back stories on the “Dark X-Men” and this issue Namor, the alternative universe Beast and the Mimic were each given the spotlight. Namor’s story makes no sense as instead of being one of the main people of the evil cabal he is now acting as just a member of Emma’s Dark X-Men. I have no idea what has gone on with Mimic for years and this was trying to explain it, but failed. Also we get the “evil” Beast is just a really bad idea to have this character running around in the Marvel Universe. Finally the creative teams are (for the most part) talent that is still trying to really make the big leagues and many did not impress. There is no reason to continue to read this book. Cancelled.

Batman #682 – Nice to see Mark Bagley’s artwork, but I’m not sure I like Judd’s take on Dick as Batman. Since he is off the book in three more issues I can certainly continue to follow it, but it appears DC maybe trying to show us why no one but Bruce can be Batman and I want Dick to be Batman. Not the same as Bruce, not better then Bruce, not worse then Bruce, just a different take on what it is to be Batman.
Ms Marvel #41 – I like this book, but the guest stars are not needed and the artist work looked really weak, which is a shame as the story is very entertaing.
North 40 #1 (of 6) – It this was an ongoing I would cancel it. The problem is that it is another horror book playing off the Cthulu material of Lovecraft and I had already hit a saturation point with that material. Still the art was decent and the story well written enough for me to hang on for at least one more issue.

Rebels #6 – This is an excellent series from DC. Tony Bedard is tapping the untouched potential of the Legion group from years back and also giving a little LOSH vibe also. At the same time he is having fun by doing a new twist on the Starro concept and just having a blast with a great castoff characters. It melds the old and gives us new and is creating one of DC’s best series.
Red Robin #2 – This book needs to be straightened out. I know Chris Yost is bouncing the story around in time and trying to build it into a cohesive whole, but it is reading as a confused morass at times. Ramon Bachs art also looks rushed. The weakest book of the re-launched Batman material.

War of Kings Warriors #1 (of 2) – A throwaway mini-series to be sure, that is just giving you background on Gladiator and Blastarr, but very well done. Christos Gage seems to get some many writing jobs from Marvel and DC that are on the periphery of the main universe, but he has yet to crack the big leagues. He really deserves a chance when he can make what could be a lame tie-in and makes it a very good read.


So this was another good week for comics. I have to be honest and while I enjoyed a lot of books my focus was off comics as both of my daughters have been visiting and our party with 85 people took a lot of time (87 is you count my wife and myself, with 19 being 8th grade and under). It is a lot of work, but ultimately a lot of fun.

Looking ahead we should be getting tons of comic news as everybody likes to announce stuff at the San Diego con. I wonder if the economy will keep the announcements a little more subdued. One thing this economy has shown me is that do something right and get some attention and you can still sell it.
Posted by Jim at Tuesday, July 14, 2009