The Book of Lies: Review

Happy Independence Day to everyone! Tonight I'll be heading out to see fireworks for the first time in years so I'm pretty excited. Usually I don't get to do much for Independence Day so it's a nice change to have two days off in a row and most of today of as well. In fact it's why I've had time to read the following book :) 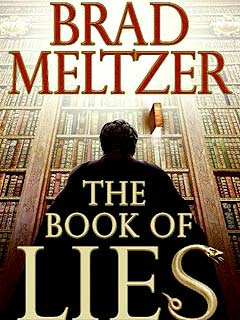 The Book of Lies
by Brad Meltzer


I've seen this book on the shelf everytime I walk into the bookstore (which is a fairly frequent event on my part). I knew vaguely what it was about, I even knew that Brad Meltzer wrote comic books. I'm fairly certain I even read the side flap at one point. Regardless I never felt a need to pick up this book. It seemed too... biblical maybe? Or maybe the premise was a bit too confusing to gain my interest. Either way, this is not a book I would have read on my own.


About a month back Jim sent me a copy of this book. It had been sent for him to review and as he never got around to it he passed it along to me. I still wasn' terribly interested in reading it. In fact if it hadn't just happened to be sitting on my coffee table when I just happened to have some free time and nothing new to read I probably would have never picked it up. I'm glad I did.


The point of this elaborate introduction is to say that this book hasn't been well solcited on some levels. Jim and I are both comic book fans (and Jim's a conspiracy fan too!) and neither Jim nor I went out of our way to read this book. The cover doesn't do anything to tell the reader about the story inside. The summary on the inside flap makes the book out to be some sort of biblical conspiracy book mixed in with some Superman history. Overall the books solicitations and marketing sell it short. In all fairness it's a hard story to describe. It is a biblical conspiracy mixed with Superman lore. It's also a story about a good guy with bad luck. It's about a boy trying to know his father and maybe himself. It's about people who have bad things happen to them in life and what they do with the memories they can never escape. It's a story about human choices and family. Most of all the story is a tribute Jerry Siegal, his family, and how important it is to tell stories.


In this book Brad Meltzer tells a story in which we find out the reasons behind Mitchell Siegal's murder. Even though it's a fictional story, and a fantastical one at that (with everything from biblical theories about Cain and Able to occultist practices in Nazi Germany factoring into the plot) it's a nice tribute to the man who invented Superman. Maybe the mystery of Mitchell Siegal's death will never be solved but at least there's a story now that tells of Mitchell Siegal as a hero to his family and as a person protecting an important artifact from some very bad people. The Book of Lies is a story for comic book fans and non-fans alike. However, I think that people who have had stories that meant something to them in their lives will get more out of this book than anyone else.


The ending was the best part of this story. That's actually harder to find than one would think. I won't give it away as the book is supposed to be a mystery, but even if you find yourself getting frusterated or confused when you're wrapped in a plot that seems to have no answers - have faith, the book pulls together at the end. The conclusion is well worth the wait.


Overall this is a nolstalgic read for any long time comic book fan and well worth the time it takes to read through it.