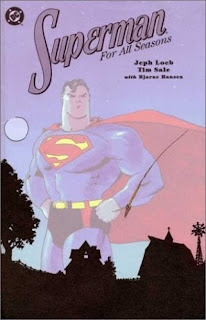 It's funny that Lee should mention Superman For All Seasons recently and my own review of John Byrne's The Man of Steel. Funny, coincidental. Not funny, ha-ha. I never heard of the Jeph Loeb and Tim Sale (with Bjarne Hansen) tale until I was perusing the trades at Cards, Comics and Collectibles in Reisterstown, MD on a weekend in June during which they were having a 50% off sale. Truth be told, I'm well behind on my Loeb/Sale collaborations. The only one I read before this was Superman: Kryptonite, which was a great story. Good experience so far plus 50% off means easy purchase.


Like The Man of Steel, this story re-tells Superman's early days in the cape. The four segments, 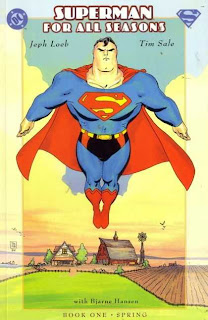 mirroring the 4 seasons, are each narrated by a different supporting character. The first is narrated by Pa Kent and covers the high school years up until Clark Kent's and Superman's arrival in Metropolis. Fairly standard stuff on its face, but the little bits of character, not just with Lana Lang and Pete Ross, but with a quartet of old timers, and even a very brief appearance of Lex Luthor at the end, all imbue the story with the elements that shape Superman as a person, rather than a personage. This Superman is a far cry from the remote, disinterested Superman of, say, Kingdom Come. In fact, this tale is so much more beholden to simple character development than Kingdom Come that they make an interesting study in contrast. Both are very good stories very well told, but where Kingdom Come has a sea of characters and maps to help keep track of all the players, the major players in this story can be counted off on one hand.

So that's the first quarter. In the second quarter our narrator is Lois Lane. Lois is fascinated 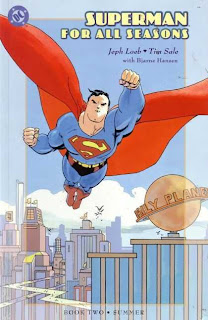 with, mystified by and enamored of Superman. She admires his works but can't understand why he helps others when he could rule the world. Not that she wants him to. She's just cynical, and he flies in the face of her cynicism, literally and figuratively. She's more accustomed to the machinations of Lex Luthor, unofficial ruler of Metropolis before Superman's arrival. Clearly, she's enjoying Superman's one-ups-manship of Luthor, such as when she's held hostage at gun point and Luthor orders everyone to stop and allow him to negotiate the situation, while Superman simply zips in too fast for anyone to see and takes the man's gun. The gunman being an employee of Luthor certainly gave him a secret advantage to his show of bravado, but, in a way Superman has his own unfair advantage, knowing he is physically superior to anyone else.

Beyond that, this segment shows just how lonely it is to be Superman, something seldom developed in other tales of his early years. Only Ma and Pa Kent and Lana Lang know of his dual identity. The former are living in Smallville and the latter's location is unknown. Luthor has some perceptive ability to recognize this, probably due in some part to his own isolation from greater humanity, and sets in motion a plan to further isolate Superman. 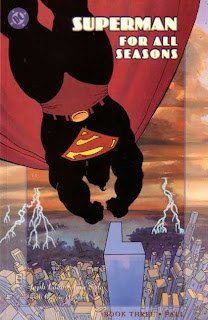 The third section follows that plan'smotion. It's narrated by Luthor and opens with his arrest for some unknown transgression. He's jailed over night before being released. Luthor then uses a young woman who's devoted to Superman to launch an indirect attack on him. She's brainwashed deeper into her devotion and altered to be a carrier of some virus that Luthor has had tailored. The virus is attacking the city and there's nothing Superman can do to stop it. Luthor outfits the woman as a superhero called Toxin, who has the antidote to the virus. When Superman comes to Luthor for help, he sends Toxin with Superman to the clouds to seed them with the antidote. Alls well for the city residents when it rains and they're cured, but Toxin dies. Superman is in a funk and heads home to Smallville.

In the final arc Clark remains in Smallville while armored, flying employees of Luthor serve as corporate stand-ins for Superman, with the line that LexCorp is "There for You...Always." This 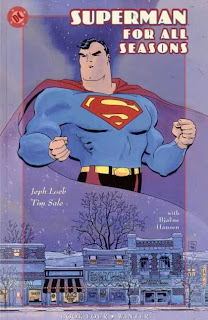 one is narrated by Lana Lang, which kind of leaves one part of the story in a sort of limbo. Lois Lane latches on to the coincidence of Superman disappearing and Clark Kent taking a leave from the Daily Planet at the same time, putting two and two together, but still denying its probability. On the whole, the 4 stories are told with knowledge that their narrators would have. I have no idea how Lana Lang would know this vignette with Lois. A minor point, but there it is.

So, Lana helps Clark to understand how the information he shared with her was life altering, especially when it was a good-bye for him to her when she was expecting a marriage proposal. Talking with Lana and a big winter storm that floods Smallville help Clark to understand he can't fix everything and shouldn't expect that of himself. Superman and Clark return to Metropolis, each resuming his mantle as protector and reporter, respectively. Lois is furious at Clark, as per usual, and Luthor stews.

The most interesting thing about this story is the comparison of Superman and Luthor. Both proclaim themselves protectors of Metropolis and humanity. Both believe themselves removed from humanity and unique in the world. Both wield incredible power. The difference is in the motiviations. Superman believes his difference imbues him with a responsibility to protect the freedom of others. Luthor's protection serves himself first and foremost. Anything left over to others is either because he didn't want it or it serves some other purpose of his. While Superman worries about his effectiveness in helping others and is lonely in his pursuits, especially in the city where no one knows his true identity, Luthor revels in his remoteness from other humans. He studiously keeps others at a distance, inviting an aura of remove and superiortity. Superman has an inherent distance and superiorty to humans but wants to be closer to them.

Which brings me to the title. It's an allusion to A Man for All Seasons, the play and movie about the life of Thomas More, one time Chancellor of England to King Henry VIII. More is famed for refusing to give his blessing to Henry's sought after divorce from his first wife to marry Anne Boleyn. More stands on his principals and ends up executed for his troubles. While Superman is a character of principal, the risk involved here is far below that of More. First off, as an actual person, More had mortality with which to contend. Superman, fictitious character that he is, does not. Even within the confines of his universe, Superman doesn't have mortality to face. Death is the most impermanent of things in superhero comics, as we all know. Now, if he were a character in Scalped or Sandman, we might actually have Superman facing the kind of risk More faced and met, but it's not going to happen here. Superman is a paragon of principal in the world of DC heroes, but I think a better title would be suited to the tale. Superman only represents one half of the equation that More represented in full.
Posted by Thomm at Sunday, July 19, 2009