Justice Society of America #29 – A Review 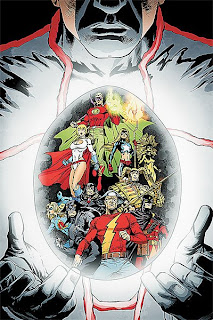 So my habit has become to try and pick two or more big books for the week and read them first and do a review of those books. This week the “big book” was a lot harder to find. The Stuff of Legend I have already reviewed and re-reviewed and when you look through the rest of what has come out, there are some good looking books, but most everything is in a middle chapter or something and few books that jump out as must be read. For one of the book this week I choose Justice Society of America #29 as we have a new creative team taking the helm of the book.

For both its first run of about 85 issues and for the vast majority of the issues in this run Geoff Johns has been a constant in guiding this team. Over that time frame the JSA has become the preeminent team in the DCU as they have surpassed the JLA in terms of consistency and quality stories. Also since the bulk of this team is not involved in solo series there is very limited mucking around with the team by editorial mandates. The JSA gets to exist within the DCU but does not have to try and tie into the DCU for specific events. If you have been reading just this book you would not even notice Final Crisis had occurred, Bruce Wayne is dead, Superman is off planet and the list goes on and on. So for me this book is number two in my love for group books in the DCU, with the Legion of Super Heroes holding down the top spot. When I heard Johns was leaving the book, I was okay with that as around 100 issues of a book is a solid run. I was nervous about who was going to take over the book and when I heard it was Willingham and Sturges coming onboard to write it, I thought this could be fun and bring new life into the comic. Jesus Merino on the art was not a plus or a minus. I have never looked for his art and I have not looked at it closely enough to form an opinion beyond the fact that he can do a decent super hero style.

After that really long introduction I have to say that I enjoyed this issue and it gives me hope for what is too come. There was no slow preamble like my review had, we jumped right into the mystery with a black egg shape object being found by Jay (Flash) Garrick. After some probing of the object we find out that it is Todd (Obsidian) who acts as the guardian of the JSA brownstone. He has been reduced to this state and the JSA have to figure out what happened and why.

At the same time we are introduced to a couple more junior members of the JSA and this is where I have a problem. The whole generational thing is cool, but turning the JSA into a kids’ camp with guardians is a little bit of a stretch and the kid sidekick for Mr. America is a really lame character, but I will give the writers enough rope to hang themselves on that one.

Next a rather “Z” list villain Tapeworm calls out Wildcat or else he will kill some hostages, The JSA does the smart thing and brings almost the whole team to take him out and make sure the hostages are saved. The bad guys were set up exactly for this reaction and they also have a large group ready to take out the JSA. Each one of the bad guys is specifically chosen to be a perfect foe for various JSA members. The battle goes badly and the JSA is defeated.

Back at the brownstone Mr. Terrific is studying the egg (or actually Todd). So when Mr. America’s sidekick walks in he never notices that the kid is under someone’s control, which allows Mr. Terrific to be knifed in the back. So the first chapter ends with the JSA beaten and Mr. Terrific bleeding to death and Todd trapped as some sort of dark matter egg.

Now the heroes being dead or beaten at the end of issue #1 or when a new team is coming onboard is cliché ridden, but the book is being narrated by an unidentified member of the group so we have no fears, if we had any at all, that the team is dead. What I liked is that the JSA is a large and powerful group and it is obvious that someone has planned how to take them down. One thing the JSA lacks is a true rogue’s gallery as the book has focused heavily on events more then actually fighting super villains. That has a plus and a minus, the plus is a lot of characterization and the minus is what is the group doing? It looks like the new team has some ideas on giving the JSA a menace worthy of them. I think this was a very good story and an excellent start for the new team and I’m looking forward to finding out whom or what is behind all that has happened.

The art by Jesus Merino was well done. I enjoyed the page layouts and design of the book. We had some tradition pages and we had the design of each page play into what was happening on the page. The battle scenes were different than character scenes, good camera angles and a good ability to express emotion. At times I felt like he was channeling a little bit of John Severin and other times a little Tom Mandrake, but all in all a nice job and I hope he remains the artist and can deliver a monthly book.

Overall Grade --- I’m not sure I’m wavering between a “B” and an “A”. It was a good start and feels like this book is in good hands. I liked the plot so far, I liked the art so far, I’m looking forward to the next issue, but there was no “wow” moment for me. How about a rare “B+”.