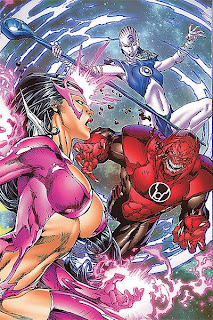 I rarely devote doing a full blown review to a series like this. This three part mini-series gave us some nice background on characters and some of the different corps that are running around in the Blackest Night event. For someone who wanted some back story or a taste of the GL Universe this mini-series was a nice little extra. If you wanted to skip the whole darn thing, you could have skipped it as well, but what made me want to give it a spotlight was the last feature in this book.

The first two stories were stories that told us about Kilowog and Arisia’s beginning as Green Lanterns. Both are two of my favorite members of the GL Corps and both stories are written by Peter Tomasi, one of my favorite writers of late. Both stories had excellent art and I was enjoying this issue and thought it was perhaps the best of the three issues. Finally I don’t want to sell these two stories short as both were great origin stories of these characters and these were high quality productions that made this book an excellent value just with these two stories.

As with the other two issues I was expecting a third story and I was hoping it would be about one of the other corps as we have less information on the newer corps then we do on the GL Corps. Instead we got a reprint of the Blackest Night free comic book story. Now you might think what a lousy trick to sneak in a reprint of a comic that was given away for free a little while ago. It sounds like the typical cost saving move a company might do and tell you it was to ensure everyone got to see it. Instead they gave us an enhanced version and made it into a DVD style commentary section. In addition to that they stripped away the color and the inks and they let us see Ivan Reis’ pencil artwork. It was a great idea and instead of feeling like a cost saving move, it was a nice extra.

The commentary was a little on the tame side and at times the associate editor’s remarks sounded like he was fawning over Johns. Still it was an enjoyable read and I would love to see this type of commentary added to the entire Blackest Night series once it is done. The reason is that once it is done they can talk about things in an open manner, because at this point they can’t say 100% what is going on without giving away the story.

What sold the concept for me was reprinting it as just the pencil artwork. Reis’ work is even more stunning without the inks and the colors. While both processes enhance the end product and make the pictures pop off the pages, those processes add layers on top of the pencil artwork and detract from the actual talent of an artist’s pencil work. If you ever want to see what an artist work looks like without color just copy a page or two on a black and white copier and you will be able to judge the art more on its own merits. Here we don’t have to do that as we get Reis’s pencils in all there glory. His work is stunning and the amount of line work and shading he is doing is astonishing. Reis has to be considered one of the top artists for super hero work in comics. He is moving into a Neal Adams type of class and these pages are offered as proof of my assertion,

Overall Grade A – Two terrific tales of two of my favorite GLs and then the special “commentary” version of the Blackest Night FCBD prelude.
Posted by Jim at Thursday, July 30, 2009