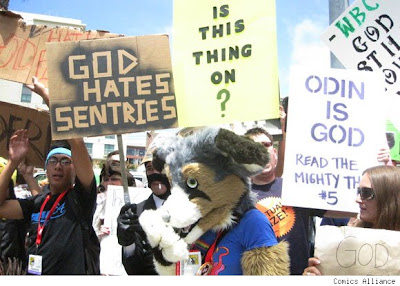 (Credit to Comics Alliance for pictures)

Being a comic fan isn’t always easy. Most people tend to regard us with a level of contempt somewhere above telemarketers, but below lazy gas station attendants. And sometimes the insular, never pleased, constantly complaining, and often hygiene deficient nature of this fandom gives everyone else good reason to think this way. But every so often, we get reminded of what a wonderfully insane, creative community we’ve all made ourselves part of. I had one of those moments when during this year’s San Diego Comicon.

Prior to this year’s Comicon, the Westboro Baptist Church announced they would be protesting the event. For those of you who don’t know, the Westboro Baptist Church is a hateful group of bigots who are best known for protesting soldiers funerals around the country with signs declaring “God Hates Fags.” Now, this is terrible no matter what their rationale is, but their rationale is (SURPRISE!) insane. Apparently, because America permits homosexuality, God is killing our soldiers overseas. They’re a despicable group of assholes who do their level best to aggravate and upset everyone wherever they go.

Now, I know you'll all be shocked, but the rationale for protesting Comicon doesn’t make much sense either. It seems that everyone there worships superheroes as false idols. I think. Needless to say, this doesn’t make a whole lot of sense. I mean I REALLY like Franken-Castle, but I don’t think I’ve ever considered undead vigilantism as a serious life choice.

Anyway, when these idiots show up, there usually isn’t a great way to respond to them. They are put a respectful distance away from the event and given a police escort to ensure that their first amendment rights are respected. No one gets hurt, but people usually walk away angry and bitter. Well, comic fans had a better idea.

Three hateful bigots were met by a peaceful crowd of con goers, many in costume, holding ridiculous protest signs, creating a scene of beautiful lunacy. Highlights include a Starfleet officer holding a sign declaring “God Hates Jedi,” Bender wielding a sign stating his desire to “Kill all humans,” and my personal favorite, “Darkseid Is.” It really has to be seen to be believed. Check out more photos (and an interview with Gail Simone about the protest) over at Comics Alliance.

Hearing about the Westboro Baptist Church in any capacity is usually enough to piss me off, but when I saw these pictures, it made me proud to be a comic book fan. Only comic book fans could come up with such a cheerful, funny, and gloriously insane response to this kind of bigotry. They took something sad and turned it into something positive and joyful. Even now, when I look at these pictures, I get a big, dumb grin on my face. Confronted with the lowest form of life possible, comic book fans responded with something uplifting and fun. Good job, fellow comic book fans! Thanks for brightening up my week. And ALL GLORY TO THE HYPNOTOAD!
Posted by Greg at Tuesday, July 27, 2010