This week I ended up with so much to say that I’m breaking the post into two parts and that's not even counting the two reviews I did. Now part 2 will be later today, but I feel that post that go on too long can less the audience. It is a little bit of a 6 of one or a half dozen of the other, but aesthetically I think it works better. 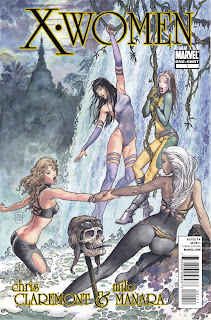 The first book I read this week was X-Women. Okay didn’t actually read the book I flipped through the pages and looked at the art. Milo Manara was the star of this book and his ability at erotica artwork was in full display. The outlandish costumes, poses the girls struck and the almost sex scenes at time were both titillating and amusing. I also thought it was amusing how under ordered this book was for my store as they had little faith it how it would sell. It was sold out before I got to the store less than 2 hours after they opened. I wonder if this book could be considered an insult to some women as Manara is an erotica artist and his soft porn (and I’m being nice) drawings could be considered degrading or objectifying women and calling this part of the celebration of women of Marvel seems a little disingenuous. For myself I love looking at beautiful women and this book certainly did that job very well. An interesting venture and certainly shows Marvel is willing to push the envelope on what they publish. Now if they could just try different genres besides super heroes.

The second book was Thor The Mighty #1. I did a full blown review here. The bottom line is this is a comic I want to read issue after issue. It is a redefined Thor starting fresh and the character has an air of innocence and newness to him like he can’t have in the regular MU. JMS did a nice job on bringing Thor back into the MU, Roger Langridge, Chris Samnee and Matt Wilson have done a great job of giving us a Thor that evokes the silver age and gives the book an almost indie feel to it. I have read that it was intended as a Marvel Adventure title and if true then I’m glad after seeing the work they realized it had a broader appeal and didn’t label it that way as I may have missed it then since the Adventure line is not targeted for adults and does not appeal to me.

Demo #6 (of 6) was perhaps the best effort of the run. It almost feels like Wood and Cloonan needed to get their rhythm back because each issue was better than the last. I would love it if Vertigo told them to continue Demo whenever the mood struck them or their timing was right. This was a unique love story of two people who had to remain together or else they would die. I was captivated from the first page and the book never let me go until the end.
What a great way to start off the week, a little light reading, a wonderful start to a new series and a great ending to a favorite.
Great Ten #9 (of 9) was a solid ending to a highly underrated series. I was sorry to see this get cut short, but it feels like Bedard managed to wrap it up succinctly and I could still see what was left out. Bedard has been doing great work for DC and while he is a name who has been around for awhile, in my view he is a rising star at this point with this type of work and Rebels. By the end of this series I know each member of the great ten and had a solid understanding of their powers. I was ready for a full fledge series.

The Walking Dead #74 was just frelling awesome as it has been month after month lately. Hard to believe this book just continues to amaze, can’t wait for the AMC series on TV. Kirkman is truly back in a groove with this and Invincible, for whatever reason he just never did his best work at marvel, but with this he shines. I love how Rick’s plan continues to unfold and how his group is impacting the community in many ways.

Onto Shadowland #1 (of 5) and while it roped me in enough to get issue #2, this book had many problems. Number one; for a major push from Marvel I agree with my friend Shawn who said the DD artist should have been given Shadowland and Tan should have the DD series. Tan’s art is uneven at best and borders on generic super hero art. His pictures of Iron Man had an elongated torso that should have made Tony Stark about eight feet tall and Avengers Tower had portraits of themselves on the wall. Second, did I miss an issue, what the heck is Snakeroot, when did DD decide to go all dark uniform and stuff. Since he is running around with red eyes I can pretty well guess that he has been taken over by something and when he wakes up or is cured of his possession he can whine and be angst ridden about it forever. Third, who is writing the Avengers’ dialogue, Brian Bendis? Thor says “Yonder fortress stirs in me ill foreboding.” Really is that the best Thor you can do Mr. Diggle? The rest is just as bad, ending with Bucky Cap saying “That would be…….unwise.” I’m starting to think buying this series is unwise. If Matt was really turned to the dark side of things and became a true vigilante in the MU running the hand, that would be interesting to see and read about. It would be an “Irredeemable” type of thing, but from the beginning. After a year or so you could always have Matt find a way back as long as he only killed some extremely bad people like Bullseye. I don’t think Marvel is going down that road, heck I doubt Marvel will let Bullseye be dead for long.
Next up was X-Force #28, Chapter 13 of Second Coming. I think that I have grown too tired of the X-Men. Even with this being a decent, if not an overlong story, I find my interest continues to wane. Hope is obvious the new Phoenix, Cable dies, Cypher is in bad shape and I just don’t; seem to care. The X-Men at one time was a huge favorite of mine and they have gone through so many changes and many bad writers that even a good story has me losing interest.

Speaking of losing interest what a disappointment Steve Rogers Super Soldier #1 (of 4) was for me. I was thinking this had a chance with Ed Brubaker as the writer and Dale Eaglesham as the artist, but it failed on many levels. First off it was $4 for 22 pages of story with the addition of the golden age Captain America origin reprint. The actual story told the story of Cap’s origin yet again and worse it added new details. I mean we just saw this in Marvels Project and Captain America rebirth. Steve Rogers has been put in charge of all the law enforcement in the MU and we go back to Cap’s origin for the umpteenth time instead of examining what he is doing right now or giving him a solo adventure involved with his new job. This is the best story you could come up with a rehash of Cap’s origin with retro-cons. Talk about lazy writing. Dale Eaglesham apparently thinks Cap is a pro-wrestler as his body is so huge he looks like he could hardly move. He must wear a 62 inch jacket to fit his shoulders. On top of that Steve uses a gun in this issue. Oh I know it is a dart gun with a sleeping agent, but it was still incongruous to his character. This was such a missed opportunity of getting into Steve’s head now that he is running so much and maybe having fun with some stuff, instead we got this. For me it is a one and done and I have saved $12.

Scarlet #1 hit the stands and after reading it I was of two minds about the book. Either it was a bold experiment at trying something different or pretentious crap masquerading as a new thing. You can read a detailed review here. What was interesting is that it took me writing a review to decide that I didn’t like it.

Another bitter pill to swallow was Batman Odyssey #1, which had some terrific artwork by Neal Adams, but failed as a single issue comic book more than any other book I have read so far this week. It was, unfortunately, what I expected it to be. Many artists enjoy thinking of themselves as writers, but Neal may have great ideas and concepts, but in this book he did not have the chops to deliver a coherent book. Maybe some of these disjointed elements will read better in the eventual collection, but if you are producing a monthly comic each book should be able to stand on its own. If not, publish it as OGN. No matter what I love Neal’s artwork and his layouts and design work is still top notch. A pretty book, with hopes the story gets better as it goes along.
Part 2 later today........
Posted by Jim at Tuesday, July 13, 2010