The Stuff of Legend : The Jungle Part 1 – A Review 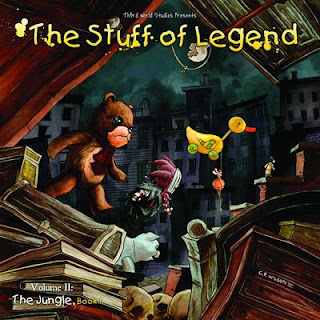 The Stuff of Legend : Volume II: The Jungle Part 1
Publisher T3rd World Studios
Writers Mike Raicht and Brian Smith
Illustrated by Charles P. Wilson III
Design and Color Jon Conkling and Michael DeVito
Format: 38 Pages of Story and Art
Price: $4.25
This is one of the best series out on the stands today. Plain and simple the rich, dark and complex tale stands out from among the crowd of titles on the stands. This is in no small part due to the artwork of C.P. Wilson III. He has a strong realistic style that brings to life these unbelievable characters. The story is a cross between, Toy Story, Alice in Wonderland and a dark and distributing horror tale all rolled into one. If I have any criticism of this series is that the long break between Volume One and Volume Two. The story itself did not really have a solid break to it, so that I believe if you started with “The Jungle” you could be a little lost (pun unintended). I think I maybe putting the cart before the horse as I usually don’t do a summation to start a review but it each column I write I let be its own thing and try to steer away from becoming formulaic in my approach to writing. Overall Grade A!
This issue was odd because I starting reading it one morning at breakfast. I was running late for work and was unable to finish it. I read a little more while picking my wife up at the airport and finished it later that night. The reason it took so long to read is it is 40 pages and the artwork is so detailed and stunning that I find myself looking at the art I lot more then I would in a regular comic. The coloring and borders give the book a unique feel also. Not only is Mr. Wilson a fantastic artist, he is a very good story teller as well, with clean page designs and layouts the book is an easy read. The art conveys the sense of whimsy and horror with equal aplomb.
The story was excellent from volume I and this chapter makes it even better. We open with the boy who was captured by the boogeyman waking up. He is scared to find his brother missing and he can’t get out of his room. The windows are boarded over and he looks out into a landscape that looks like a deserted city street and one lone voice cries back to him to remain quiet. It provokes a great sense of unease and mystery as to what is happening to him.
We then catch up with the toys that are carrying on their mission to save the boy. The interactions between the toys is developing the characters of the toys and setting the tone for how each will react in different situations. The Boogeyman is threatening his general if he never captures them and we sense a level of fear in the Boogeyman himself. I won’t continue with a plot summary other than to say a battle ensures and another menace raises its head that could wipe out both sides of the equation. From beginning to end I was drawn into this world and even with the breaks in reading the story always stayed with me.
It is a wonderful book and harkens back to fairy tales of old where you have fantastical characters and beings are mixed in a setting of real danger and darkness. Pinocchio from Disney years ago still had all of the elements of danger and horror mixed with the fantastic. It is only in recent years that we have turned all children stories into pabulum due to some overwrought groups who think our children should be raised in bubbles.
I love this book and if you are not reading this you are missing a true gem in the field of graphic story telling.
Posted by Jim at Saturday, July 17, 2010