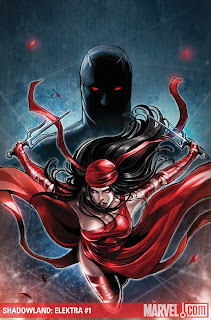 SHADOWLAND: ELEKTRA #1
Written by ZEB WELLS Penciled by EMMA RIOS
Cover by SANA TAKEDA
SHADOWLAND TIE-IN! Elektra Natchios had vowed to never again interfere in the life of her ex-lover, Matt Murdock. Learn what made her break her vow and return to Daredevil's side at Shadowland. Zeb Wells (DARK REIGN: ELEKTRA) returns to the character with hot newcomer Emma Rios (AMAZING SPIDER-MAN) for a vital piece of the Shadowland puzzle! 32 PGS./One-Shot/ $3.99
Jim: After my rant against Shadowland I have decided to get Shadowland and Daredevil and avoid the other stuff as I’m sure it really doesn’t matter. By the way Shadwoland and DD are both on the short list to be dropped if it does not work from the jump. This book entices me and repels me at the same time. Plus Zeb Wells and Elektra. Negative 32 pages and $4 and a possible worthless tie-in. Questionable issue – Emma Rios on art, she has a nice light line and work seems more suited to brighter stories, her work on Dr. Strange was a bad fit, will it work here?
Lee: I’m still waiting for reviews on the whole Shadowland storyline before I commit to the eventual trade and hc’s. It certainly has potential.
Greg: Zeb Wells is always worth a look. I cannot understand why he doesn't work on more high profile stuff for Marvel. He's a fantastic writer. 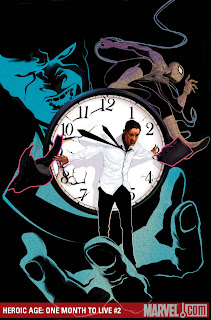 HEROIC AGE: ONE MONTH TO LIVE #1-5 (of 5)
Written by RICK REMENDER, STUART MOORE, JOHN OSTRANDER & ROB WILLIAMS
Penciled by ANDREA MUTTI, KOI TURNBULL & MORE
Covers by MIKE FYLES
WHAT WOULD YOU DO WITH ONE MONTH TO CHANGE THE WORLD? An all-star creative roster brings you a weekly Marvel event! Featuring Spider-Man, the Fantastic Four and the Avengers! In a world of unlikely heroes, Dennis Sykes is about to become Marvel’s unlikeliest. Banker by day, struggling parent by night – and unhappy about it all. But when a tragic turn of events gives Dennis a 30 day death sentence, he discovers his accident comes with super-powers. And as the weeks in Dennis’ life tick down, he sets out to leave a mark one way or the other - - even if he has to go through Spider-Man, the Fantastic Four and the Avengers to do it. Everyone is the hero of their own story…but not every hero is a good guy.32 PGS.(each)/ $2.99 (each)
Jim: Wow does this sound like a disaster in the making. Just reading how many cooks are trying to make this broth and reading the premise it sounds like some higher ups idea and then him saying make it happen. Crap at any price is too much.
Lee: I think you’re being overly harsh on this one. It’s just another 5 week gimmick just Marvel Monsters or Marvel Westerns. I think it has potential.
Greg: I agree with Lee here. That's an interesting roster of creators on a fifth week book. It may not work, but it probably won't be dreadful with those names attached. That new Legion book must really be getting to you Jim. 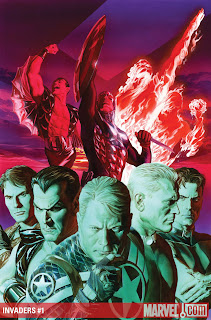 INVADERS #1 (of 5)
Written by ALEX ROSS & CHRISTOS GAGE
Penciled by CAIO REISS Cover by ALEX ROSS
Variant Covers by ADI GRANOV, SAL BUSCEMA, ALEX ROSS
The greatest super heroes of World War II blaze into action—this time in the modern world! For the first time in decades, the original Invaders are alive and active at the same time! But what mysterious force has drawn them all together...and how does it relate to the darkest moment in Invaders history, an event so horrifying it threatens all life on Earth today? Featuring: Captain America! The Sub-Mariner! The original Human Torch and Toro! The Golden Age Vision! Spitfire! Union Jack! And Steve Rogers! 32 PGS./ $3.99
Jim: These packaged books from Alex Ross and Dynamite have failed to excite me at all and I have never heard any buzz off these series.
Lee: You don’t hear any buzz because the last Invaders series was so incredibly bad. Actually there have been two or three Invaders series that have all been astoundingly bad. But, if any one can make an Alex Ross idea work it would be Christos Gage. That alone makes it worth checking out.
Greg: Sorry, all this talk about Alex Ross made me go gorge myself on Marshmellows so I could model as Superman. What were we talking about? 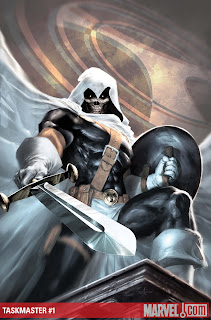 TASKMASTER #1 (of 4)
Written by FRED VAN LENTE Penciled by JEFTE PAOLO
Cover by ALEX GARNER
Taskmaster has trained hench-thugs for every terrorist organization and criminal cartel in the Marvel Universe. So when the rumor starts that he's turned traitor and now works for STEVE ROGERS, a billion-dollar bounty is put on his head, and every cadre of costumed fanatics -- A.I.M., Hydra, Ultimatum, the Sons of the Serpent, everyone -- looks to collect. Now Taskmaster has to fight hordes upon hordes of his psychopathic students while at the same time figuring out who framed him -- which requires him figuring out who he really is! That's right, the man with the photographic reflexes has no memory of his true identity -- and you'll learn the unexpected truth along with him! 40 PGS./ $3.99
Jim: My decision making process: A villain Taskmaster as the star of a series, check. Fred Van Lente as writer also a check for me (since he co-created Action Philosophers he always gets some plus points), Jefte Paolo is a decent artist another check, 40 pages for $4, that is okay, I will check out issue #1.
Lee: I’m sure this will be fine but I’m not sure that I care who Taskmaster really is. Actually, I’m sure I don’t care so this is an easy pass.
Greg: I hope this has more Batman dressed as a Pilgrim in it. 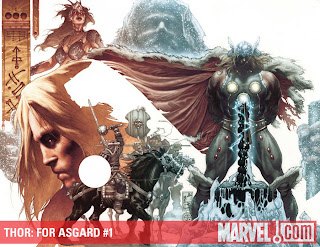 THOR: FOR ASGARD #1 & 2 (of 7)
Written by ROBERT RODI
Pencils & Covers by SIMONE BIANCHI
Beginning an epic adventure showcasing the God of Thunder as you've never seen him before! The vassals of Asgard are in armed revolt...Odin is missing...Balder is dead...and the entire continent is battered by a years-long winter. How can Thor put the empire back together – especially with his mighty hammer Mjolnir mysteriously denied him? 32 PGS. (each)/ $3.99 (each)
Jim: Another look at my decision process. Thor, cool character check, note movie is coming out be weary of useless add on mini-series. Robert Rodi as writer is a minus, not familiar with his work enough to make him have a category in my mind. Art Simone Bianchi iffy as he can be a good cover artist but still learning how to tell a story. Apparently out of continuity makes my movie add-on radar go off a negative on this book. 32 pages for $4 huge negative, 7 part series, total cost $28 and with an artist who can’t make a deadline. PASS. Wait for reviews and get the trade on sale somewhere if the reviews are good.
Lee: But, you forget that Rodi wrote the absolutely amazing Loki miniseries years ago. It showed that he understood the characters and had a solid grasp on them. For a limited series, the risk for the first issue or two is small. I’m in.
Greg: I'd normally be with Jim on this, but I've read Rodi's amazing work on Loki. This is worth at least a look. 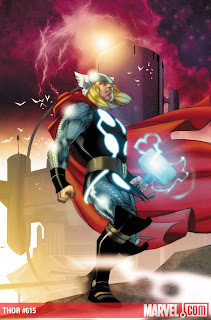 THOR #615
Written by MATT FRACTION
Art & Cover by PASQUAL FERRY
Fraction! Ferry! Heroic Age! The perfect jumping-on point as THOR’s all-new creative team and all-new era kick off HERE! In the wake of SIEGE, Asgard must take its proper place as the Golden Realm, most glorious of the nine worlds of myth. But that means Thor's home isn't just a beacon...it's a target! And what happens to the Asgardians and the denizens of all nine worlds -- including Earth! -- when a dark, destructive force from another reality comes on the warpath?40 PGS./ $3.99
Lee: Of all the new books coming out this looks the best. I like Fraction's writing but I love Ferry's art. An easy, easy buy for me.
Greg: Guy's this is going to be the Jack Kirbyiest Thor we've had in YEARS and its going to be completely awesome.
Jim: I'll check it out because Fraction did some good Thor work and I like Ferry's art. 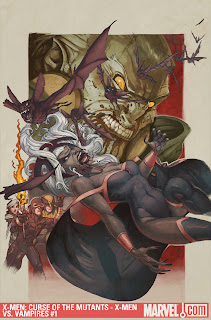 VAMPIRES#1 (of 2)
Written & Art by VARIOUS Cover by NICK BRADSHAW
Lock your doors, board up the windows, arm yourselves with stakes and sunlight…and it still won’t protect you when the vampires stalking the X-Men set their sights on YOU! The X-Men have their work cut out for them as they‘re pitted against a terrifying new clan of vampires in all the B-movie-styled glory we can print in four colors! Baby, this is one comic book with bite! Four brand new tales of horror await PLUS the first part of NIGHT SCREAMS, from Uncanny X-Men #159, the classic tale of Storm’s struggle with Dracula himself by Claremont and Sienkiewicz! 48 PGS./New & Reprint/ $3.99
X-MEN: CURSE OF THE MUTANTS – SMOKE AND BLOOD #1
Written by SIMON SPURRIER
Penciled by GABRIEL HERNANDEZ WALTA
Cover by CLAYTON CRAIN
Eager to do their part in stemming the vampire invasion of San Francisco, the X-Men’s Science Team works to find a cure for vampirism. Bringing a vampire into their lab for examination, the scientists find themselves in over their heads when the monster escapes. With the lab on lockdown and a vampire on the loose, the X-Club is sure of only one thing: it’s going to take more than a doctoral degree in biochemistry to survive this night!40 PGS/One-Shot/$3.99
Jim: Oh boy X-Men and Vampires together. I think I will go and wax my chest and wait in line for the next Twilight movie. Gosh all my favorites stuff together. ------- Are you f**king kidding me. You get me a little interested in the X-Men with Second Coming and follow up with this – blecch.
Lee: I was all ready to agree with you until I saw Simon Spurrier was writing the series. He’s an excellent writer and especially good with horror elements. The overall idea is dumb but with a proven writer, there is a chance that this will succeed. It’s worth seeing the first issue.
Jim: Lee, read the solicitation it is a one shot. Spurrier is just cashing a check for this one.
Greg: See my post from earlier this week for my thoughts on this.