Nothing to do with comics but it just struck me this week that one of the richest people in the world, Warren Buffett, did nothing. Sure he amassed great wealth and is considered to be a brilliant man and friend to many of the rich and famous, but he did nothing. Bill Gates built a huge business that created jobs and products that are used worldwide, Buffett is a brilliant investor, but from what I can discern did nothing to improve lives or improve anything. He is a product of our bankrupt economy that thought we could be a service economy, instead we need to start over now and start to actual manufacture and make stuff again. That’s it, just an observation and opinion, of which I have many. Trying to segue into comics is hard from this so I won’t even try. Let’s say that this week was not as stellar as last week, but interesting nevertheless. 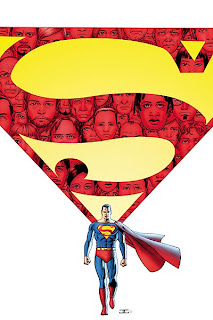 As I have stated multiple times, Superman “Grounded” storyline sounded like a bad idea. I had so many reservations about Superman #701 going in that my expectations for the book were as grounded as Superman has decided to be. Given that, it was not a bad little story. Superman walks into Philadelphia and helps solve a car problem, cleans a back room in a diner for a cheese steak, helps to motivate some drug dealers to move, diagnosis a heart condition, talks a jumper off a building and ends with a philosophical discussion with a person questioning what Superman is doing. All in all it was JMS defining Superman in a different way. As a single issue story I thought it was enjoyable. Eddy Barrows on pencils, JP Mayer on inks and Rod Reis on colors did a very nice job on the artwork. Eddy is definitely an up and comer in the art department, I just don’t know if he can maintain a monthly schedule. The problems I had with the book is that the prologue for this was so short and sweet in the prior issue that it does not feel like there was an event in Superman’s life that would force him into a walking tour. Another element was the stunt when Superman flew the reporter up in the sky; it seemed overly nasty and cruel for Superman. The moralizing and philosophical points Superman made felt a little out of character for him also. Personally I like the points JMS made, but it came off as not something I would expect from Superman. The scene where Lois shows up and they have a conversation about what to do about covering his identity at Clark was a throw in and it seems like it was almost forgotten by JMS. Finally sustaining this story for I believe a year is going to be very, very tough. I’m here for #702, but this book is on an issue by issue basis.

So having my low expectation boosted, I grab a book I was semi-dreading and decided to read Daredevil #508 next. First off why the heck isn’t Robert De La Torre and Matt Hollingsworth doing Shadowland, which is the “event” book. The art here is much better then Tan’s work in Shadowland and works as a “noir” type of book. Daredevil is obviously in the control of something and this issue Matt tries to break free of the “evil” but fails. Dakota and Foggy are being attacked by the hand, Matt is now evil, Master Izo goes overseas to get Elektra. Other problems with this book are we can see the plot being telegraphed a mile away. Daredevil is possessed and that absolves him of all of his sins committed under mind control. For no reason other than love for the character I will follow Shadowland and DD a little longer, but the idea that this is taking a chance with a character is crap. What I would have wanted is a Matt who says that he has tried to do things the right way according to the law, but the technicalities, the selective enforcement of the law, etc. etc. drive him to finally push back. Bullseye is a stone cold killer and DD finally takes him out of the equation. Better to cross the line and save an untold number of innocents in the future than to constantly play the old game. Now it is game on and where the book goes nobody knows. Instead we have this, which feels predictable with a semi-happy ending that will of course be bitter sweet in some way. One last issue, his friends say Matt killed Bullseye in cold blood. Cold blooded murder is not fighting a well armed crazed killing psychopath and killing him, cold blooded is pointing a gun at someone who doesn’t know it is coming and pulling the trigger. DD is surviving on his pedigree at this point and is on my probably drop radar. 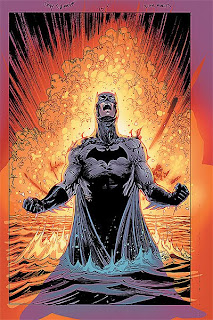 After that book I went for something relatively safe and read Batman #701. This issue was Grant Morrison and Tony Daniel filling in the blanks between RIP and the Omega beams taking out Bruce. Grant did a solid job with the writing and Tony Daniel did his normal job with the art, which means brilliance on some pages and then awkward poses and odd camera angles the next. I guess Grant and Tony work well together as I blew hot and cold with both of them. I really want to see Grant’s scripts and see how much direction he gives Tony. Still this was a good issue and the mystery around Thomas Wayne and Dr. Hurt continues to build.

So I’m still looking for the best book of the week at this point. I have been singing the praises of Killer, so I thought this should do the trick and read Killer Modus Vivendi #4 (of 6). The dreaded middle chapter syndrome hit this issue. It was a very good read, some graphic and yet tastefully done sex scenes, double crosses, political intrigue and more, but still a middle chapter. As this publication is a translation I’m pretty sure the breaks for a monthly comic are artificial and therefore causing some choppiness in an otherwise fluid narrative. Still a very good issue, but not rising to the crème de la crème as last issue did. Don’t get me wrong I love this series, it is just the story will read better as a whole.

Now as it is Wednesday night I may go and read some more, but I’m deep into watching Farscape again and may check out more episodes from Season Three next before I get back into my comics for this week. 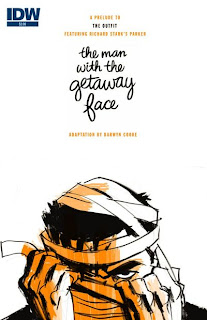 I had to read one last thing before jumping into the second episode of Season Three of Farscape. I really love that show and a quick aside, the show still holds up today. It mixes continuity based plot shows with episodic shows, but always advance the characters. So before that I sat down and decided to read the Prelude to the Outfit, Richard Stark’s Parker, The Man with The Getaway Face adaptation by Darwyn Cooke. I loved the first adaptation “The Hunter” and this transitional chapter to get us from The Hunter to The Outfit. It was a beautiful story, great production values and 20 plus pages of story and art in an oversized format for only $2. Right now this is the best book of the week. Cooke explains he wants to adapt four of the Parker novels and decided to eliminate two of the first four to get to two books that he feels work better visually. Still after The Hunter, he needed to use some key element from the second novel to get to The Outfit. Parker changed his face to help keep him safe from the mob that is now after him. This prelude establishes that fact and shows Parker running a job. At the end we find a character from the robbery who is left alive, knows Parker’s new face and may feel he has an axe to grind with Parker. I’m sure Skim will be causing trouble for Parker in The Outfit. The oversized format is a real joy as it measures 12” by 8” and gives us the art close to the actual size. The story is fast paced and while it may be a prelude, it stands on its own very well. If you are not paying attention to this work by Cooke you are missing on some fantastic stuff. I love New Frontier and think it is one of the best series ever done in super hero comics; well Mr. Cooke is acquitting himself with equal aplomb with this material. True he is adapting novels, but he is doing it masterfully and is outshining most everything else on the stands. Scalped, Killer and Criminal fans will love this book. 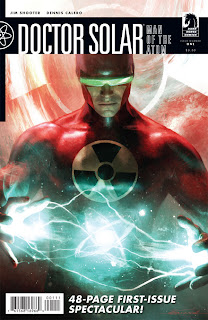 Then I decided it was time to see if Jim Shooter can pull off bringing back Dr. Solar again and I read Doctor Solar Man of the Atom #1. Never bet against Shooter because for all the negatives that have been spewed about the man over the years I have never read any book by him that was not well thought out and had a strong approach to it. Doctor Solar was no exception and I’m now looking forward to Jim having a long run on this book. In one issue this book has remained true to the original version of the character, established a base of supporting characters, started an adventure and set up a premise for why the world is suddenly filled with people with super powers. That is one heck of a great accomplishment for one single issue. Plus it was done in 22 pages of story and art, they threw in the original first issue of Doctor Solar from the sixties and the price point is $3.50. The price point shows me Dark Horse made the jump in price, but decided not to just gouge the fans by jumping straight to $4. I have heard that Shooter as Editor In Chief ruled with a heavy hand, but I have to think he is a tremendous editor as he knows what he is doing and has proven it over and over again. I loved the subtle twist that Doctor Solar may have created all of these anomalies in his world because when he was turned into the being he is now is he went and fixed a situation where he embarrassed himself by being too forward with a girl. Everyone can understand that feeling of thinking a relationship may have been more then it was and perhaps being embarrassed by acting on it. So the chance to fix a few seconds in time seems innocent enough and yet it appears to have set off a quantum wave that is creating many problems. In one single event Shooter has set up the premise for the series as Doctor Solar may now have to try and fix what he created as well as try and figure out who sabotaged his work and created the accident that created Doctor Solar. Now some people may say this is a rip off of Dr. Manhattan from Watchmen, but Doctor Solar was here first. I would be remiss if I did not mention the art and colors by Dennis Calero as he does a great job with page design, layouts, storytelling and a lush realistic style. The only complaint I have is a feeling that his backgrounds can be a little sparse, but all in all this was a great start to the latest incarnation of Doctor Solar. I personally hope Shooter is left alone to control this corner of Dark Horse as the man has his act together on this book.