Did you notice anything missing in the Thanksgiving post last Sunday?  How about the Indians?  Yep, they were a big part (sort of) of the first Thanksgiving so why did I skip them?  Well, the covers related to Indians were really so... so... good that they deserve their own spotlight.  They are way better than I would have thought.  Way more stereotypical too. 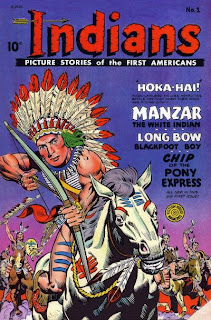 Indians #1, 1950 sometime.
I gotta admit with a cover logo that says "Manzar, The White Indian"... I'm dying to know what's on the inside.  This cover is ok but the bright colors really pull you in. 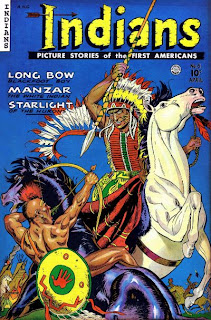 Indians #5, April 1951
By issue #5, you can tell whoever is doing these is having a great time.  This is just a fantastic piece.  The amount of detail in all the figures is incredible. 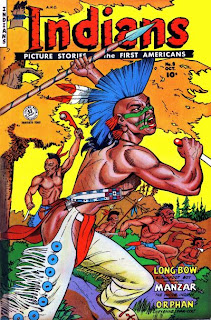 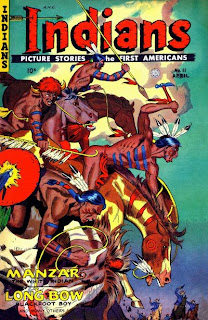 Indians #11, April 1952
This is a great cover.  Just from composition alone it's incredible. 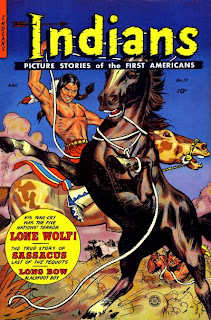 Indians #17, Spring 1953
This is one of the best horse covers I've ever seen.  Horses are really hard to draw but whoever did this was great.  Overall, the covers for the series are great.  I don't know how good the stories are... but who cares with covers this good.