As we come into the home stretch let’s first dispense for the grade for the week and I will go with a C+, perhaps a little harsh, but I expect high quality and most weeks are B or a B+, I think I will be hard pressed to hit an A as I get some many books. This week had some “A” level talent and it was an enjoyable week, but the true “wow” factor was missing.

Onto the rest of what I read this week. 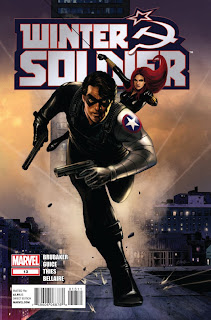 Winter Soldier #13 is Ed Brubaker’s swan song at Marvel. Not that he is gone forever, but with his creator owned material doing well and his TV writing career posed to take off Ed has left Marvel on good terms. This is the final story he wrote that is being published and it is a good one. Bucky with a little help from his friends is trying to save Natasha and stop the last elite soviet soldier, who was trained by Bucky. Butch Guice is providing the artwork and it is a solid adventure. I’m curious to see the next writer and if they will brand it Marvel Now. Personally I would prefer Bucky actually doing more spy work instead of super hero type battle with noir flair. After Brubaker the new writer gets a couple issues try out to sell me at best.

Battlefields #2 with The Tankies by Garth Ennis is another excellent effort. If you have any feeling or desire to read war comics, the best of the best is what Garth Ennis has done over the years. This is a Korean War story, but it doesn’t matter, Garth writes the best war books on the market, in a market that no longer has any war books even compared to the great stuff DC did years ago. Ennis material is more realistic and harder hitting. Of course it is a different era and you are allowed to do more then you could back in that time frame. The other key element in Garth’s work is his characters, they are so real that you relate to them and feel what they feel. The horror, the fear, the gore are all almost too real, but drive home the point that war in not glorious, but a brutal slaughterhouse.

Amazing Spider-Man #699.1 is a prequel to the Marvel Now Moribus series. Like DC did with the new 52 I’m happy to see Marvel roll out some books with a different flair. I knew going in this was a weak attempt to trade on Spider-Man to get more people to read the Moribus series, but I was committed to trying it anyway. It gave us a good introduction to the character by re-telling his origin, which I had forgotten. The biggest issue I had with the book was the fact that the prequel is a different artist then who is drawing issue #1. I liked the art and thought the announced artist Elson for the series had a weak showing on a recent Spider-Man issue. Also it was obvious that somewhere along the way they decided to make this a Spider-Man issue as the first two pages are a bridge to get from the Spider-Man book to the flashback. 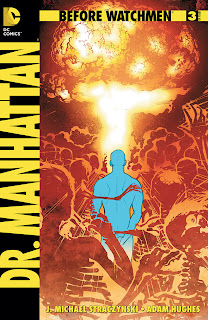 Before Watchmen #3 (of 4) Dr. Manhattan was a solid issue. JMS has the doctor fixing all the quantum timelines he opened up to ensure the one true path remains. Adam Hughes interior work is stellar and proves to me he still has the chops to tell a story with pictures and is not just a pure cover artist. I’m looking forward to the wrap up of the series.

Suicide Squad #15 is a “Death of the Family” tie-in and I thought it was done very well. Harley and the Joker battle it out and Harley finally breaks with the Joker and heads back to the Suicide Squad. Waller used contact lenses she gave Harley to spy on the battle. It mixed the Suicide Squad book with the Batman storyline in a seamless manner as opposed to the clunky effort on the last issue of Suicide Squad. Of all the tie-in issues, this has been my favorite so far.

Before Watchmen Rorschach #3 (of 4) was an excellent book. I have enjoyed the BW stuff and almost hate to see it go and I’m dreading signing up for all three (or was it four) hard cover collections coming out in the same month. Brian Azzarello has captured this character very well and Lee Bermejo’s art, as always, is stellar. 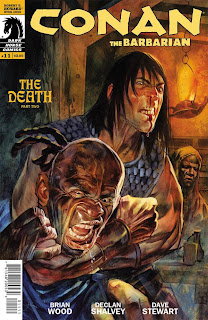 Conan #11 is part 2 of “The Death”. This arc inside the overall story and Conan and Belit has been the best arc to date. Brian Wood nails the feelings of Conan and Belit perfectly. You can feel the love and the pride and arrogance of both of them. You can also get a sense of Conan and that is still a callous youth in many ways.

Criminal Macabre / 30 Days of Night – Final Night #1 (of 4) is not only this week’s longest title it is Steve Niles crossing over two different franchises he is at least co-creator on for a self contained cross-over. Cal McDonald is such a rat bastard loser of a character, who is now a ghoul, but I love his stories. Cal is an “I don’t care” kind of guy who is teaming up with an FBI agent to stop a zombie invasion. It is pure comic book fun! I loved the first issue and look forward to the rest.

Frankenstein Agent of Shade #15 is Franky in Rotworld. The setting is one year in the future where Anton Arcane has taken over the world. Frank fights thru everything at great cost to his friends and creates an army of beings like himself to fight against Rotworld. It is just a madcap frenetic paced book and it is a fun read. I’m assuming this book is destined for the chopping block. One thing I have to say is that under the rotworld banner DC has three excellent writers with Matt Kindt on Franky, Jeff Lemire on Animal Man and Scott Snyder on Swamp Thing.

And the last book is Bloodshot #6. This book is never a most anticipated at this time, but man it is a book that I enjoy reading. Duane Swierczynski has crafted a great story about Bloodshot trying to determine his identity.  The story has plenty of mystery and great out and out over the top action. Manuel Garcia delivers on the art. If you like Punisher and Wolverine at their action pack best, then you will love this book.

And that is a wrap for this week. Next week will be a one day post as will the week after that. The holidays are upon us and that means the schedules get a little skewed.
Posted by Jim at Tuesday, December 18, 2012