Lee: And another year is done.  Let's close it out with IDW.
Thomm: So what’s on the IDW horizon these coming months? Let’s go see.

Rocketeer: Hollywood Horror #1
Roger Langridge (w) • J. Bone (a) • Walter Simonson (c)
You wanted more Rocketeer... and you've got it! Missing scientists! Plucky girl reporters! Betty and Cliff on the rocks! The mysterious Church of Cosmicism! And who is the sinister Otto Rune? Pulp thrills the way you like them as the Rocketeer comes up against a brand-new adversary in... "The Hollywood Horror!" FC • 32 pages • $3.99
Lee: Honestly, the Rocketeer character bores me to tears. And everytime I swear I am not going to get the next collection they assign a great writer/artist team. Right now it’s Waid’s run. Upcoming is Langridge… I don’t want to but I have to get this.
Thomm: I really enjoyed Langridge’s Snarked and have always liked J Bone’s work, so this is a good one to check out as far as I’m concerned. Truth be told, I haven’t read much Rocketeer and don’t have much feeling about the character, good or ill. 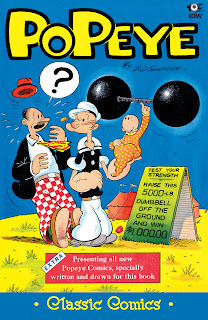 Classic Popeye, Vol. 1
Bud Sagendorf (w & a & c)
Re-presenting the classic Popeye comic book series that debuted in 1948 by Bud Sagendorf, the long-time assistant to creator E.C. Segar! Carefully reproduced from the original comic books and lovingly restored, Volume 1 contains issues #1–4, with stories such as "That's What I Yam," "Ghost Island," and "Dead Valley." Also includes all of Sagendorf's gloriously funny one-pagers.
HC • FC • $29.99 • 212 pages • 8.5” x 11
Lee: I really, really enjoy these old-timey comics. I picked up IDW’s sampler and these have been a ton of fun. Completely silly and totally insane is the best way to describe them. Not as totally insane as Felix the Cat… those people were doing drugs. But darn close.
Thomm: Just goes to show there were a lot of pages in those old books. Four issues comes to 212 pages? Even with filler stuff giving history, that’s a lot of pages.

5 more below the break! 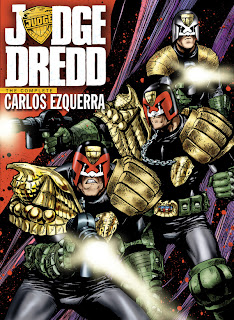 Judge Dredd: The Complete Carlos Ezquerra, Vol. 1
John Wagner (w) • Carlos Ezquerra (a & c)
Return to the legendary stories from Mega-City 1 in this first collection of tales illustrated by Carlos Ezquerra! Reprinted in classic B&W and featuring a wealth of complete stories.
HC • B&W • $49.99 • 248 pages • 9.25” x 12”
Lee: It’s interesting that the hype specifies “a wealth of complete stories.” I really wanted the Bolland hc but I knew there wouldn’t be anything close to a complete story. ½ the fun is reading the entire story. If you aren’t going to give me that, then call it an art book. As for this… eh. I like Ezquerra’s art but I am not sure that I need an entire book of it. And, just to be hypocritical, if it were the complete JD in fancy hc format with all the appearances in chrono-order, I would buy that.
Thomm: I never got into Judge Dredd. Lee’s description of this collection isn’t whetting my appetite any, either. 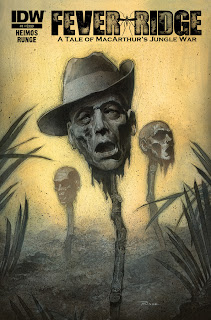 Fever Ridge: A Tale of MacArthur’s Jungle War #1 (of 8)
Mike Heimos (w) • Nick Runge (a & c)
The South Pacific theatre of World War II is usually seen from the perspective of the Marines fighting from Guadalcanal to Okinawa. Unsung in WWII fiction is the story of the 6th Army’s 6th Infantry Division (“the Sightseein’ Sixth”) and their jungle commandoes, the Alamo Scouts, under the command of Gen. Walter Kreuger, the trusted and savvy lieutenant of “America’s Caesar,” Douglas MacArthur.  Fever Ridge explores unique events, perspectives, exotic locales and peoples that are different than any you have encountered in other WWII stories… and ultimately is the story of a secret that could have changed the War, and the world. FC • 32 pages • $3.99
Lee: Even though the cover makes this look like a zombie book, this is really historical fiction. So, we have an accurate war story about the Marines in the Pacific… this oughta be plenty bloody. I’m in.
Thomm: Big fan of historical stories, so this certainly has me with that angle. Add in the egomaniacal MacArthur and some secret stuff. Sold! 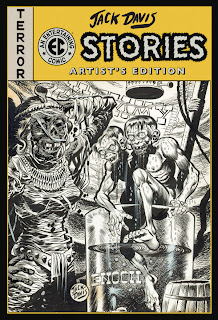 Jack Davis’ EC Stories: Artist’s Edition HC
Al Feldstein Harvey Kurtzman (w) • Jack Davis (a & c)
Jack Davis is one of the founding fathers of EC Comics, he is a master of horror, humor, and nearly every other genre EC published. Aside from his work at EC, Davis is one of the most prolific and popular commercial artists of all time. His instantly recognizable style has graced covers of Time Magazine and TV Guide, as well as movie posters and stamps. Jack Davis' EC Stories: Artist's Edition will present not only a beautiful selection of some of Davis' best and most memorable stories—such as FOUL PLAY—and an extensive cover gallery—and all at the same size as originally drawn!
HC • BW • $112.50 net discount item • 176 Pages • 15” x 22”
Lee: I’m not buying this but I really should. Every single one of these collections have doubled in price within 6 month- 1 yr. Buy it now, wait it out, and sell it on ebay for a profit. Of course, you need the extra money now…. But isn’t that always the problem?
Thomm: I don’t have the investor mentality for comics. I just buy them to read them, so the 6 month to a year plan isn’t going to get me to shell out over $100 for an art book. 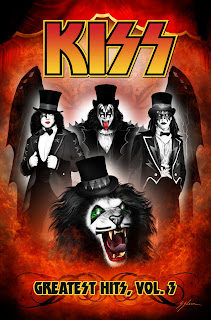 KISS: Greatest Hits, Vol. 3
Brian Holguin (w) • Angel Medina (a) • Mister Sam (c)
Pull out the cream makeup, ready the powder and lay the eyeliner on thick… because “Psycho Circus” continues in Volume 3 of KISS: The Greatest Hits! Rediscover classics like "Bottle Full Of Wishes," "Forever," "Four Sides To Every Story," and the four-part "Destroyer." TPB • FC • $19.99 • 168 pages
Lee: I am pretty sure this is reprinting the Kiss: Psycho Circus series from Image in the late 90’s. Actually, I know it is because “Forever” was issue #8. I don’t remember if the stories were any good but I do remember the art. Medina is at the peak of his abilities with this series and he was given lots of freedom to draw super-cool, super-pretty pictures. It could be worth it if you go in with low expectations.
Thomm: Low expectations I’ve got. Not low enough to buy the book, though. 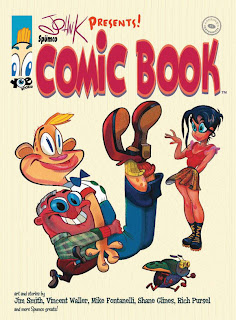 John K Presents Spumco Comic Book
John Kricfalusi, Jim Smith, Vincent Waller, Mike Fontanelli, Shane Glines, Rich Pursel (w & a) • John Kricfalusi (c)
Legendary animator, John Kricfalusi, creator of Ren and Stimpy, George Liquor and the gorgeous girl heart-throb Sody Pop, loves comics (the good ones!) and has produced some crazy, fun, wild (and sexy) ones in the past. These raucous extravaganzas are now ultra-rare and expensive and eagerly sought after by his thousands of devoted fans. Yoe Books is pleased as punch to finally publish these comics in a large-format hardback collector's edition book. Get this--it includes an astounding never before published 25-page epic comic " Jimmy the Drooling Numbskull in Nutty the Friendly Dump!" worth the price of admission alone! John is joined by his cartoonist crew including Jim Smith, Vincent Waller, Mike Fontanelli, Shane Glines, Rich Pursel and more Spumco greats! Simply titled "John K. Presents Spumco Comic Book" this is going to be a major buzz book that you will want to be the first in your neighborhood to have! HC • FC • $34.99 • 160 pages • 9” x 12” •
Lee: Ok, what appeals to me… it’s oversized. I love oversized books. It’s a hc. I love hc’s. What I don’t like… I am not sure the stories will be good. Well, they might be good because the first season of Ren-Stimpy was excellent. But then it went into gross out territory pretty quickly and just upped the disgusting factor. If it’s gross out humor I’ll pass, but if it’s funny then I am sold. I wish someone could tell me what to expect.
Thomm: Expect the gross out. If that’s your kind of humor, dive right in. I’ll be watching from dry land.
Lee:  Well, I managed to find some of the books included in this collection.  The art is fantastic... it's later version Ren-Stimpy so it's very much gross out humor.  See it here.


Thomm: Rocketeer and Fever Ridge are the strong points for me on this list. The rest is outright no or a tepid maybe.
Lee: Fever Ridge does look really good.   I am disappointed by Spumco though.  It's just juvenile gross out for the sake of being gross.  I really like the art but even I have limits.
Posted by Lee at Friday, December 28, 2012