Not for anything but Marvel watched DC smacked them around in sales for over a year and put together a plan to take back first place and Marvel Now is succeeding. DC is certainly still doing well, but I think the weaknesses of the new DCU are starting to show. Regardless DC’s rock is still in fine hands. Below I submit my proof to support my assertion. 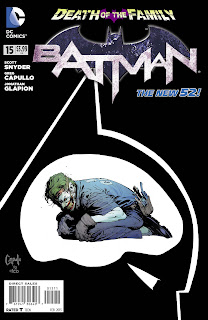 Batman #15 is that proof. Scott Snyder’s Batman has maintained extraordinary high sales and with Greg Capullo producing outstanding art this book is a great series. This issue we see Batman square off with the Joker and lose the battle, but ends up home recuperating. The “family” meets with him and demands to know why the Joker knows who they are and Batman states he believes the Joker is a liar and yet he has a secret about a battle with the Joker. In telling the story he reveals that it may be possible the Joker was in the Batcave years ago. They squabble and Bruce leaves to follow up on a clue as to where the Joker is setting up a trap. I think the Joker does not know the secrets as Scott has put out red herrings before in the Court of Owls story. He had us thinking Thomas Wayne (a heretofore unknown brother) was alive and now the Court’s man. The next issue he pulled it back 99%. Personally I hated the idea because it was so comic book cliché and Scott is a better writer then that, but I think his intent is to keep us guessing. With the Joker, if he knows then getting that genie back in the box will be way too hard. What was so unreal and very creepy was Batman’s narrative that he has seen it in the Joker’s eyes and he knows the Joker loves him. To me that is a psychological horror and on par with the stuff that Heath Ledger pulled off in the Batman movie. Capullo’s art has been nothing short of fantastic and Jonathan Glapion’s inks make the work even better. The one quibble I have is Bruce is drawn way too young and then when you show he has at least two ex-Robins and a ten year old son; it is still too much back story to fit into such a young man. It is a great time to be a Batman fan with this type of work being done; sadly DC has way too many books that don’t cut it. One final word, the back up with the Riddle was also very well done as Snyder makes him into a villain to be respected. What Snyder is doing has been building more back story for Batman and making the villains that he fight into modern versions that can still be a threat. A hero needs to face tough odds in order to stand as heroic.

Of course in keeping it batty we have to talk about Batman and Robin #15. This book, Detective and Batman Incorporated are all top notch books. This issue Robin goes off to find Alfred on his own and running into the Joker. It is a great adventure as Robin gets beaten and we are left with a good cliff hanger. Peter Tomasi is a highly underrated writer, too often praises are song about Snyder, Layman or Morrison, but Tomasi is right there in the mix. Patrick Gleason‘s slick art is high quality and I enjoy Tomasi’s continual building of the character of Damian Wayne. The one issue I have with the “Death of the Family” is the Joker is the only enemy and even for the Joker it appears he is everywhere all the time. I know we can assume all these events are occurring over a time line, but when reading the books as they come out it feels like the Joker is everywhere. Comics depend on a suspension of disbelief and that disbelief has been taken to the extremes seeing the Joker attacking everyone at once. It makes the Joker seem more then human and in my mind, the Joker is scarier because he is human. 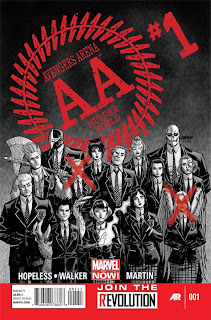 Avengers Arena #1 came out this week and I was favorably impressed with another book I almost never even got. Dennis Hopeless is the writer. Now while I thought it was interesting I think the book had a fatal flaw. The concept is a bunch of “D” list young Marvel heroes are playing survivor for real under the thumb of Arcade. It is a 30 day contest and you get out, only if you are the sole survivor. We start the book with day 29. Now I know even with that there are a thousand ways to set up the almost ending, but we are talking about a book that is in theory an unlimited series and it has a clock. I enjoy Kev Walker’s art and Hopeless is two for two this week so I will give this book a spin on a short lease.

The Massive #7 is just another good issue in what is a very good series. Brian Wood is doing a heck of a job world building in a near term future where environmental disasters have radically changed the world. It is done in a “realistic” manner and allows Brian to comment on things going on today and build what appears to be a very real feeling post crisis world. 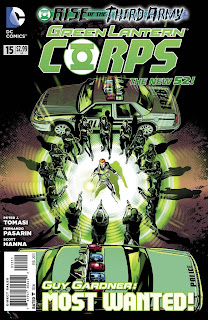 Green Lantern Corps #15 is by that same guy Peter (Batman and Robin) Tomasi and this is my favorite book of the GL stuff of which I now only get this and GL. Guy Gardner has been stripped of his ring and dropped off at home, in Baltimore, my home town and former place of residence for many years. At the end he ruins a federal operation and is arrested. A good tale of watching the mighty fall yet shows you Guy’s heart is in the right place.

Fantastic Four #2 was a decent issue, but it was a lot of build up to just get the story started. I want a quicker pace, especially with the FF after reading much of Hickman’s slowly pace epic. Of course I think this is a two year story arc, but it doesn’t mean you can’t tell stories in an issue or three inside the overall story line. Bagley’s art with Mark Farmer on inks is some of his best work.

And that puts a wrap on Part 2. I could just have easily made this one long post, but it works better breaking it up. The week just did not dictate a strong theme approach for me and so we are doing every book I read and just rolling it out in pieces.