And so we come to our final chapter and the final post for 2012. I hope to generate some more interviews next year and do a few more opinion pieces; I will keep up the week in review and as always mix up how I do it. Finally I almost forgot the list for this coming Wednesday is here and here. The first is the clean list, the second the more detailed listing. Of that list Harvest #5 (of 5), Invincible, Colder, Fury Max, Punk Rock Jesus #6 (of 6) and I,Vampire are all highly anticipated. 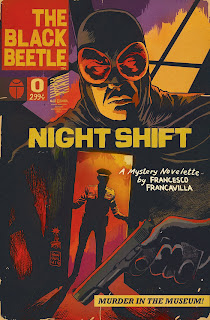 The Black Beetle #0 – The Night Shift by Francesco Francavilla. Francesco is known to me as an artist from Left on Mission at Boom years ago to the Black Panther book from Marvel a couple years back and here he is giving us a pulp hero style book as writer and artist. Francesco style is not going to blow away anyone but its dark and blocky style along with his effective story telling has made me a fan of his work. Unfortunately the story is very pedestrian and a paint by numbers type of deal. We have seen it all before, the mystic artifact being sought by Nazis and the hero saving the damsel in distress and the hero saves the artifact.  As you read it you can hear the Indiana Jones music. The final twist where the hero uses the artifact himself to start something gave me enough hope that I will be back for the mini-series. My concern is that we learned so little about the hero and the story felt so plain that it may have turned off other readers who are not as easy going as I am. Let’s face it I’m an easy mark to try out your book and I will give the series a chance. 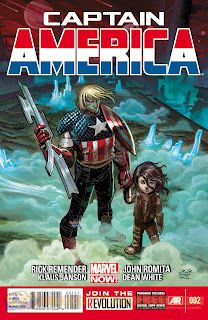 Next up is Captain American #2 by Rick Remender and John Romita Jr. Rick said he wanted to explore the Jack Kirby stuff and boy is this book different from what Cap had been. It is such a hard left turn that I expect the sales to tank on this book. Rick has some wild ideas but his execution against them have been uneven at best and often the book gets too involved and long term falls apart. Uncanny X-Force was certainly better at the beginning and died during the Captain Britain stuff. The one year jump in this issue already tells me that at the end of the adventure Cap will get off the train a minute after he left in issue #1. That means the entire adventure only impacts him and does not interfere with anything else. It is sad that in today’s comic there is no true change to any character because they are needed in too many books and you can’t have any consistency in characterization if you make a true change in the character’s own book. Rick has built up credit with me so I’m on for a few more issues but right now it is just a crazy Kirby festival. I think it is almost a fun retro ride, but I wonder how long this story will be and where will Rick go after this book. I guess that child that he has adopted could come back with him as a young man and be a character in the series going forward. Bottom line is this book is probably being received harshly by Cap fans that have come to expect something different. In hindsight Brubaker’s run was not the masterpiece we thought at first as it fizzled and died at the end. 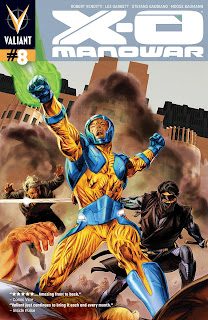 A good book is X-O Manowar #8 by Robert Venditti, Lee Garbett and Stefano Gaudiano. The pace of this book could be faster, but we are now getting to Earth being invaded by the aliens. Aric and Ninjak are uneasy allies as the invasion is about to start. The artwork is very good, the action is great and the writing is solid, but we are eight issues in and are yet to establish a premise about what the series is about. If this is a long limited series, then it is working fine. If it is meant to an unlimited series I’m wondering how we transition to X-O versus the aliens saving Earth to an unlimited series. Regardless the upcoming Planet Death looks to be great as the aliens will be invading and we will have to see how Earth fares. I guess we find out if all the books are in the same Universe during this series. Jump in the water with issue #9 if you have passed on this book before. 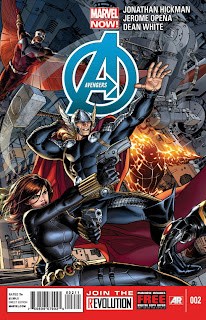 Last and in some ways least, yet in others ways a good book was Avengers #2 by Jonathan Hickman and Jerome Opena. It was let’s meet the cast book. In the first issue the movie Avengers are beaten and Cap comes back to Earth to gather the new team. Since most of the team is almost unknown we are giving the one to two page introductions to the characters as we flashback to their recruitment. It is a decent read, but we are $8 into the investment and have yet to get to the story. Hickman is making Bendis proud with the decompressed story telling. This type of book pushes me to want to wait for the trade, but when the trade comes out I will probably just forget the story existed. Hickman continues to intrigue me with potential but takes so long to deliver on his ideas that I’m bored or have dropped off the book by the time we get to the crux of the matter. The faster release schedule helps, but I’m guessing that can only go on for so long. Of course I think Marvel has a lot of book on an 18 issue per year schedule now.

That wraps up 2012, thanks for reading and hope you are back next year.