Yesterday was my first day off for the long Christmas break and while I would’ve loved to have prepared this post on Thursday night, I was busy attending the 32nd annual Stevens Forest Elementary School play directed by the super-awesome Mr. Palmer.  Mr. Palmer has been the gym teacher since the school opened in 1972 and will retire at the end of this school year.  He’s a one-of-a-kind individual who generously gives of his time to the children in our community and I’ve had the privilege of helping him set up Field Day for the last several years even though I no longer have kids attending that school.  This year’s play was A Christmas Carol and it was a miracle that the school system allowed a work that acknowledged God to be performed (There was a reason why he waited for this to be his swan song production -- leverage).  It was spectacular, especially the Ghost of Christmas Future costume and the kid who did an outstanding job playing Scrooge, and I ended up seeing it twice.  So, I’m writing this hours before my deadline and I’m going to (try to) be brief (maybe too brief).  Six titles (I was going to do eight but I got too tired) are mentioned after the jump (there could be spoilers): 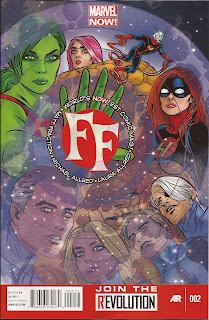 I guess this was really part four of the Marvel NOW Matt Fraction Fantastic Four storyline as up to this point the two titles have totally been intertwined.  That should all change with issue 003 (Do you really think Marvel will continue with the same numbering system up to triple digits?).  Ant-Man is still counting down the four minutes until the Fantastic Four (I really hate that I can’t use the abbreviation FF for the Fantastic Four) return from unknown space.  Of course, it’s no surprise that they don’t come back as scheduled.  The Mole Man shows up with his big green monster the next day and the team has their first outing.  Darla finally gets her Thing costume.  She-Hulk ruins her lawyer suit, but the FF kids luckily got a reprieve from what looked like a really boring lecture from her.  Medusa fights in a see-through negligée (I think she, a queen, was waiting for someone to dress her properly).  Ant-Man eats a bowl of cereal while explaining to the kids the meaning of “ex-con”.  The tone of this book is delicious and off-beat or rather on-beat with numerous pregnant pauses (panel repeats) for comedic effect.  I loved the image of Dragon Man sitting on the Boop Boop machine.

Apparently, when the F.F. (see periods mean THE Fantastic Four – pay attention) left, an atmospheric/cosmic-something anomaly remained hovering over the Baxter Building (actually over the Earth – must be pretty big).  Darla spends some time watching it expectantly as if it were time for Jesus to return again.  By the end of the issue someone does come through – The Human Torch!  An older, blinder, half-crazed version of Johnny Storm in an all-black (looking similar to Allred’s Madman) outfit, who announces that the F.F. are dead and the portal is now closed forever.  I have to say (despite his appearance on the cover) I wasn’t really expecting to see a member of the original team to show up in this book for some time.  I can’t predict what will happen next, I only know that I’m looking forward to it.  I added this book to my pull list (I’m still debating on the other title) and I dropped Captain America.  Boy, that looked like a train wreck of chaos – One Year Later did not make me want to pick up #002.

AWESOME!  You can read what my store said about it here.  I want to reread it, but this time in chronological order.  Now, that’s brief! 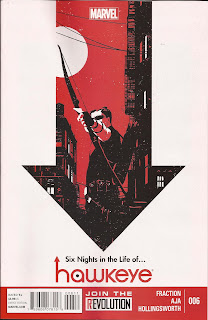 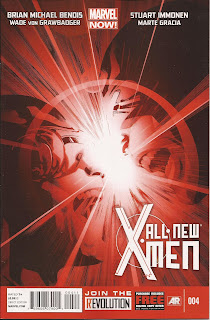 Cyclops versus Cyclops.  Everybody loves Jean Grey, who the way the guys respond to her, must be the most perfect woman in the world.  Either that or she emits some killer pheromones.  She’s dealing with her newfound psychic powers and it’s giving her a headache worse than the one this super-bright laptop screen is giving me.  The Beast is dying and it’s up to Hank McCoy to save…himself.  We got two pages of the New Mutants (time-girl and heal-guy) and it was great – backstory via natural conversation.  I like these characters already.  In fact I like all the characters.  I’ve been away from the X-Men for nearly 20 years and it’s like I never left.  I’m totally hooked again and will be signing up for Bendis’ Uncanny X-Men as well -- should be a nice companion piece.  Two books I can handle, but please don’t expand the story beyond that!  Oh, was anyone else annoyed by the Wolverine/Storm kissing ad?  Is that supposed to be romantic or sexy?  All I could think of was that it was just WRONG!

I liked the story, but I don’t think I’m as enthusiastic about it as most people. My reading experience was marred by the horrible printing on my copy (I need to ask for a replacement one).  The black shadow minions of the god-butcher bled right into the bottom of the cover (see the scan).  The tree page was also blurred.  Pretty cool that Thor can use his hammer as a reading lamp! 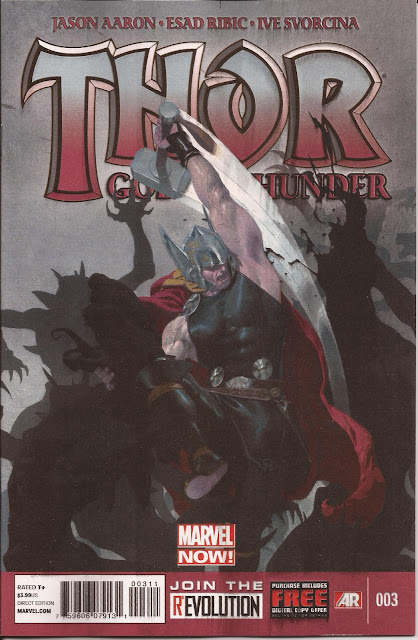 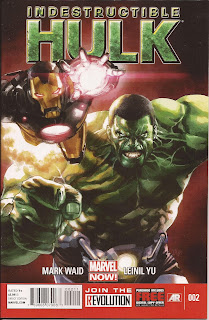 You had me at “Quintronic”.  One of my earliest exposures to the Incredible Hulk was issue #213, which featured him fighting the Quintronic Man – a giant robot that is manned (kinda like Voltron I guess) by five guys (without the burgers and fries).  So, when I saw that word as the next issue title, I immediately made up my mind to get this issue, which by the way has nothing to do with the Quintronic Man.  No, this issue was all about Tony Stark visiting Bruce Banner and Bruce getting some long-pent up resentment toward Tony out in the open.  Of course that means Hulk versus Iron Man (that would make a great Sunday Cover edition, Lee or a freebie post for me).  You know what? I was pleasantly surprised by how much I enjoyed this issue after the first one left me a little cold.  This isn’t any Bruce Banner I’ve ever seen before (or Tony has ever heard before – funny scene), so while it seems a little contrived (just to fit the new plot), it works too.  It actually does make sense that Bruce might want to do something useful with his brain, other than try to destroy the Hulk.  It doesn’t appear that the Hulk is talking in this series, which is weird.  Banner just lets himself get angry and then reigns it back in (for now).  Anyway, I’m starting to get onboard with the direction Waid is taking the book.  Plus, the fact that the Hulk and Daredevil will be meeting in 2013 helps. 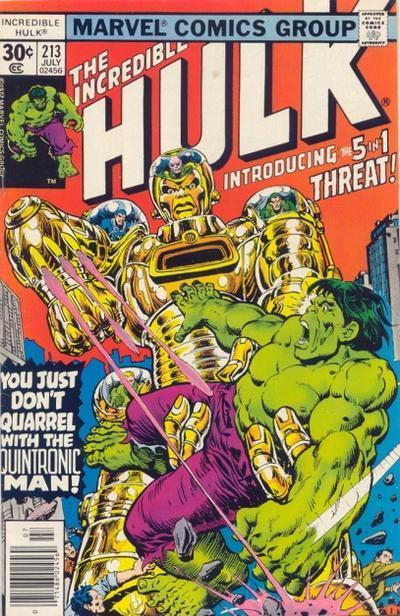 This title will certainly make my “Top 10” list or “Best of 2012” list, whenever Lee tells us when we have to prepare them (I’m shooting for two weeks from today).  Hey, if I write down generalities as to why I like this book now, I’ll be wasting material for the Best Of post.  I think I’ll quit while I’m ahead.  And I still can’t tell who the Superior Spider-Man is?  I suppose we’ll find out next week, I hope. 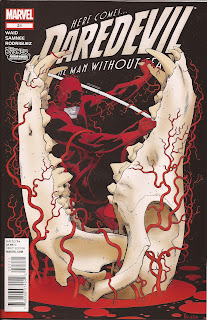 Have a Merry Christmas everyone (or Wonderful Winter if you don’t celebrate)!
Posted by Matthew at Saturday, December 22, 2012