A little background before we jump into the interview. I have been a long time Tim Truman fan from back in his days with First Comics all the way through his writing on Conan and to this project that he and his son Ben Truman put together. One thing I admire about Tim’s work is that it seems to still be getting better and better. Many artists over time seem to stop learning or take a lot of shortcuts and there material becomes a shadow of the work they did before. Not in Tim’s case, I think Hawken might be some of his best work ever and I’m a proud owner of a few pages of Tim’s art.

Second it is nice to see a father and son team up, especially in creating a new character. I have two daughters, but I always enjoy any sort of projects that we can do together and I be willing to bet that Tim and Ben pushed each other to do their absolute best and it shows.

Of you passed up on Hawken I encourage you to either go here and buy it or order it from you favorite comic book store. It is more then worth the price of entry. And if you want to keep up to date with Tim check out his official site here.

We have decided to run the interview over two days, so onto part 1.

Jim: Tim you have been in the comic book industry for a long time. Can you give us a little background of how you got into the business?

Timothy Truman: I was always into comic books. Growing up, I became a rabid fan.  I found myself paying attention to the work of various artists rather than following specific titles or companies. So I decided pretty early that I wanted to become a book illustrator or comic book artist. However, being a rural kid form , I had no idea about how to actually land a career doing it.

After graduating from high school, I attended Columbus College of Art and Design for one year and then went to 's . I flunked out of both places. I had specific goal of becoming an illustrator of some sort and really didn't have the patience to sit through all the foundation year courses, art education courses, and the like. After meeting my wife Beth at WVU, I sort of sat it out for a few years while she went for her degree there.

After she graduated, it was my turn to complete my education. Fortunately, Joe Kubert began his school in at about that time. As soon as I saw the ad for the place, I knew I'd found my shot at entering the field. I started my courses there during the school's third year and ended up graduating on the Dean's List. 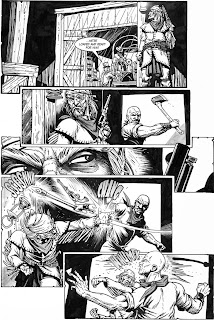 I'd sent out portfolios to various publishing companies a few weeks before graduation. A day or two after graduating I went into and came back with my first professional job, doing role playing game art for a publishing house called SPI Games. I worked for them for about a year. When they folded, some of the editors I'd worked with were hired by TSR Hobbies-- the Dungeons and Dragons people-- in . TSR was revamping their look, and some of my former SPI editors remembered my work and suggested me to the art directors there. I got a call from TSR, flew out there to show my portfolio and joined their art staff.

I worked there for about two years. I met some great friends, including Jeff Easley, Larry Elmore, and Keith Parkinson, who were also on the art staff there. Seeing their work every day was really inspiring and we always gave each other input about the work we were doing on various projects. I did a few covers, but mainly became one of their go-to black and white art guys. Doing so really gave me a chance to refine my style and get some techniques down. However, I didn't like punching a clock every day. I'm a real loner and a night person, so being on staff could be a real drag at times.

was about an hour away and I found out that once a month there were these Sunday comic book conventions there. I learned that a fledgling indy comics publisher, First Comics, usually had a table at the con. So some friends and I drove down so I could show them my portfolio. I showed them my work-- mostly science fiction and high fantasy material-- and they seemed to be pretty impressed.

Editor Mike Gold called me back a few days later and asked me to do some samples for a new backup feature they were working on with a writer named John Ostrander-- a hard-boiled science fiction mercenary named GRIMJACK. The project sounded right up my alley. I worked up samples, sent them in, and John, Mike, and art director Joe Staton immediately offered me the job. As luck would have it, the back-up took off like wildfire. Everyone who saw it loved it. It was pretty quickly decided that Grimjack would get its own title. First Comics made me an offer: to do two titles for them. Not only did they want me to draw GRIMJACK, they also wanted me to handle art for a book based on Mike Grell's STARSLAYER character. Thus I was able to quit my job at TSR and become a full-time freelancer. Luckily, I've had work ever since. 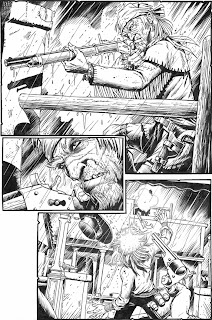 Jim: That is certainly a long time in the industry.
Tim: Hey, watch it, bub!

Jim :From your perspective what has been some of the bigger changes in the industry?

Tim: Well, certainly the biggest was the advent of the direct sales market, which got into full swing-- luckily for me-- a few years after I graduated from the .
The system brought about the comic book store as we know it. Before that, comics were sold in drug stores, food stores, and magazine stands and the subject matter that an artist or writer was pretty juvenile and limited.   Of course, we had the black and white mags, too-- Creepy, Eerie, Vampire, and the like, where the material was slightly more adult, as well as Heavy Metal and Epic magazines, which gave us a taste of the more adult oriented science fiction stuff that was going on in Europe. Other than that, we had the undergrounds, of course, which were sold in head shops and record stores. Along with the black and whites, the undergrounds were probably the biggest influences on my own work, especially during my teen years.  However, the direct sales market opened things up for the "indy" publisher movement. Eclipse, Pacific, Dark Horse and First Comics came along, offering readers a greater variety of story matter and giving creators a larger platform for expression. Plus, they offered us cool things like royalties and made it easier for us to own the trademarks and copyrights of the books we created. To maintain a pool of talent, the mainstream publishers had to follow suit. It was a pretty amazing time.

Another big change came when major comics’ distributors started buying the smaller distributors. When I was publishing graphic novels with my former colleague and collaborator Chuck Dixon through our 4Winds Publishing Group, we were dealing with, like, 15 different distributors. We were able to hold our own. If one distributor was low on orders, you had other distributors who would take up the slack. That led to a lot of freedom for the independent publishers-- especially small guys like us. But gradually, as the small distributors disappeared, we started selling fewer comics. Now there are only a few distributors and it has really hurt the market, I think.

The latest change has been the digital publishing revolution. There are good points and bad points to that. We still haven't seen the full effects of it yet. I find many aspects very exciting. On the other hand, it's messed with the tried-and-true classic comic book format. As someone who is into composition and storytelling, I get a lot of satisfaction out of arranging 4 -6 panels within a big 10 x 15 page and making it work. But we'll see how things shake down.  Like I said, there are other things that make digital comics kind of exciting. There are lots of possibilities coming down the pike. For instance, with the online comic strips that I do with the Grateful Dead at Dead.net, we've started messing with imbedding music into the images. The form is a long way from hitting its peak. 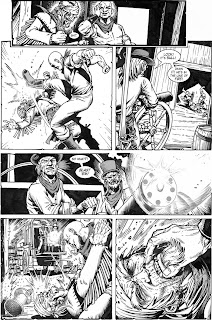 Jim: Of late I have noticed you are just writing, especially on Conan. Are you doing full scripts or what is your process?

Tim: Actually, I've been doing a lot of art over the last couple of years. My son, Ben and I just finished up our horror western, Hawken, with IDW. We came up with the character and stories together, Ben did the final scripting, and I did all the art, covers, and lettering. The miniseries is now collected as A MAN NAMED HAWKEN--  a huge graphic novel that should be on the stands by the end of this month (Jim: See link above). It was quite an undertaking. Working with Ben has been amazing-- he's a great writer. I feel the art is some of the best I've ever done and reviewers and fans have been crazy about the work, which is quite cool.  Ben and I also did an 18 page story for Dark Horse's re-launched Creepy magazine.

Other than that, I've also been doing a lot of book cover illustration, mainly for Suibterranean press, as well as the online strips for Grateful Dead Productions. So I've been quite busy as an illustrator.

As far as Conan goes, I've been affiliated with the Dark Horse titles for a long time now. In fact, the longest that I've ever been attached to any other character or title. It's been fantastic, especially since I'm a lifelong fan of Conan and the rest of Robert E. Howard's work. I'm currently doing a 12 issue adaptation of Howard's Conan novella, Hour of the Dragon, which will be premier in 2013. I've almost always done full scripts for my Conan stories. It just seems to be the best way to handle the book. I've done things via plot method a few times in the past, and it can be a cool way to work, depending on who you're working with. The only time I did it on the Conan books was for the stories about Conan's grandfather that I did with Richard Corben.

When I'm just the artist on a book, I can go either way, depending on the writer. John Ostander and I always did GRIMJACK via the plot method. With Joe R. Lansdale I always work from full script, because that's what Joe prefers. I personally prefer the plot method more, because it gives me more room to contribute to the storytelling, though with Joe's script's that's never really been a problem at all.