As I said I selected 13 books for the week in review on and this segment is about the books published under the DC comic banner. 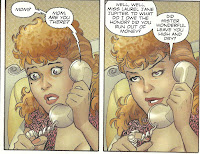 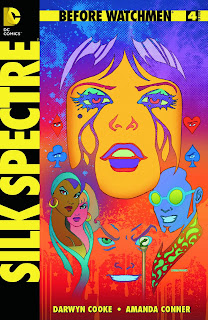 First up is Before Watchmen Silk Spectre #4 (of 4) by Darwyn Cooke and Amanda Connor. I selected this book because it is the first Before Watchmen series that is coming to a conclusion and this has been a great series. I have no clue why some fans have been ignoring this stuff as it is what every fan professes to want to read, a great comic. Amanda Connor is doing some of the best work of her career and she has a slew of great work on her resume already. There is one two panel scene in this book that absolutely shows an amazing range of ability to express subtle emotion. Both panels are close ups of Sally Jupiter as she gets a phone call from her daughter Laurie (the Watchmen’s Silk Spectre). Laurie has run away and now she is finally calling home. Sally is an overbearing Mom, who truly loves her daughter. The first panel shows Sally worried and hopeful that she is finally hearing from her lost daughter. The second panel she is twisting her finger on the phone cord and her look is changed from worried concern to smug mother. You don’t even need the dialogue. I added the panels so you can see for yourself. Amanda is listed as co-scripter on the book and I’m guessing she did a lot of the dialogue or at least reworded the dialogue for Sally and Laurie. It all rings so true and as a father or two daughters I can hear the dialogue as well as read it. Cooke’s story gave us great depth to who Laurie is and delivers her at the end of the story right into the Watchmen book. It felt seamless to someone who has not re-read Watchmen in a long time. This was a great job all around and a mini-series that stands on its own as a great character piece. 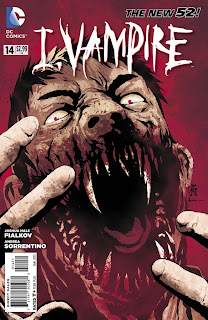 The second DC book I picked was I, Vampire #14 by Joshua Hale Fialkov and Andrea Sorrentino. I picked this book as this is the type of DC book that I gravitate to the most. It is a character who had a limited history in the DCU and my not knowing him at all means I walked into the book cold. Plus the artist on this series has a Jae Lee type feel to his work at first but over the course of the book he has developed (or I have grown accustomed to his work) his own style. So many artists seem to have similarities of style but the design, camera angle selections, expressions, storytelling is something each artist develops on their own. Of course I never know how detailed of a script an artist is working from, but I think most writers allow some freedom for their artist to strut their stuff. Sorrentino does not sell his art at the moment (I emailed him and asked) but his work is very well done and I would love to own a page. Dark, dramatic, easy to read and for me it has become clearer. Sadly he is leaving the book to happily work on Green Arrow with Andy Diggle, but the new artist has a good dark style that will suit this book. I have also heard rumors of the book maybe be cancelled and hope that it is not true as Joshua has been writing a great story. At this point Andrew is now the villain of the piece and Mary is trying to find a cure. Andrew has decided to take over the world and is in the process of recruiting his generals. A total flip from the beginning of the series, yet the inherent internal logic of the book holds together. I have also read that trade sales were very good, so it looks like DC has a Vertigo style hit on their hands, where the trade supports the series. 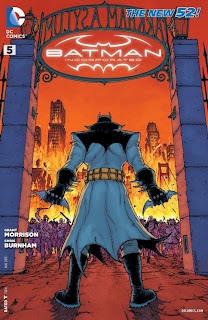 The last DC book I choose was Batman Inc. #5 by Grant Morrison and Chris Burnham. I choose this book as I love Grant Morrison’s work at times and this is one of those times, All Star Superman, his New X-Men run and other books are Grant at his best. Batman Inc. is another series that is Grant at his finest. At any other time this would be the main Bat book, but with Snyder on Batman it appears DC has tied all their horses to Snyder and is allowing Grant to do his own thing. Thank you DC, as I don’t care how this ties into or when it ties into the other books because it is just great stuff. Last issue Batman tells Damian he has to go back to his mother and this issue he tells him that he has seen the future and if Damian becomes Batman it will be the end of Gotham. We flash forward to a Gotham in flames overrun by the Joker plague. Damian is fighting to save a baby and bring it back to their one island of safety Arkham Asylum. In charge is Commissioner Barbara Gordon in her wheelchair. It ends badly and then we flashback to Damian with Batman pleading to stay with him and telling him the future is not set in stone. It is pure Grant Morrison with the absolutely fantastic artwork by Chris Burnham who is part Frank Quietly, John Severin, Neal Adams and someone else, but really all Burnham. It is just all beautiful detailed work. The overall story line was made a little wonky by the new DCU, but Grant made it work and we have a great Batman story that may go down as one of the better Batman stories of all time.