Godzilla: Kingdom Of Monsters #1 -- A Review 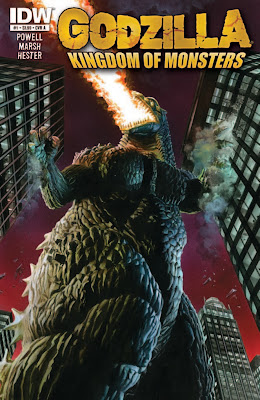 Godzilla: Kingdom of Monsters by IDW was the biggest release of the week. So, how did it measure up to my enormous expectations? As I did last week, lets just see the grade right now...

Big G may have set Tokyo on fire, but he didn't set my world on fire. Don't get me wrong, I enjoyed the comic, but the pleasure was fleeting, because I breezed through the book so fast. For me it's hard not to draw comparisons with the original (and still the best) Godzilla series: the one by Marvel in 1977, featuring the astounding art of the legendary (and super friendly) Herb Trimpe!

I'm a civil engineer in my "real" job, so when I say comparison, I mean "by the numbers". The IDW issue had 22 story pages and Marvel's first issue had only 17. They each clocked in around 80 panels, meaning the Marvel book is much more dense. Not only that, but the Marvel series has more complete and detailed backgrounds. The real difference comes with the words. By my count, there are only 562 words in the IDW issue with 205 coming on a single page. The Marvel story had almost that many on the first five pages! I stopped counting on page 7 at 842. To be fair, I should have excluded the captions from the tabulation, because comics just aren't written that way anymore. I love my old Godzilla comics and I could write much more about them (maybe another time), but you wanna know about the new series, not the old one.

Well, like I said, the book moves very fast. Godzilla rises (first appearance -- no one has seen him before) from the sea and starts stomping around causing massive destruction and chaos (just like you would expect). He kills indiscriminately like any other force of nature (the timing is certainly poignant). The military tries to take him out with traditional bombs, but when that fails they opt for the nuclear alternative, which yields unexpected results -- giving him radioactive flame breath! Three-hours later, he's using it to torch Tokyo.

What? You want more details? Ummm...that's all that happened. Well, there are a few more things worth mentioning:

I love the Alex Ross cover and it's actually reminiscent of the Herb Trimpe cover to issue 1. The gatefold Eric Powell one is nice too. One of the promising things about this series is that ALL the Toho monsters will appear eventually. So, you don't need to make up a pseudo-monster, you can use the real deal. What was really interesting was the comic shop variant covers that they listed in the back. It showed Godzilla's foot stomping on various local comic shops. I wish my store had participated, because I would have bought an extra issue just for that! Not that I would want to see it destroyed, but it would be cool to see it on a cover.

This book is penciled by Phil Hester, inked by Bruce McCorkindale, and colored by Ronda Pattison. The combination of all three works very well. I'd say it has an "animated" look to it. Hester's panel layouts are quite diverse with a mixture of outlined panels, open panels, and overlapping images. There were a few scenes where the approach disrupted the flow of the story for me. One example is shown below: 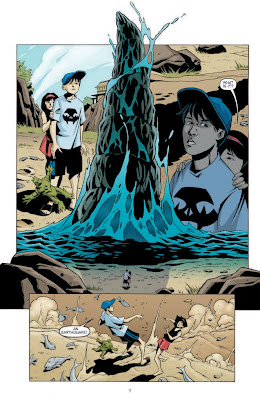 In the first panel, the tail seems to be just emerging from the water, but then when you get to the third image you see how massive it actually is. I almost missed the detail of the kids being in the foreground of the tail, since I was associating it with the first panel. It's actually a nifty bit of page design, but this particular one didn't work well for me. There was at least one other I had some trouble following immediately, which had a dual image of Godzilla getting nuked. Godzilla is surrounding the mushroom cloud that's engulfing a smaller image of Godzilla. If Phil can adjust his work a little bit to ensure that the flow is seamless, then that would really help. Regardless, it's still very pleasing to the eye.

This series is written by Eric Powell and Tracy Marsh. As I already said, it's a quick read and there is little in the way of character development. We're introduced to several characters (rarely by name) and at this point you're not sure if they're just random bystanders or part of the main storyline. I suspect most of them will be returning in later issues. We have to have interesting human characters to offset the monster battles in order for this series to work. I particularly want to see the two little Mothra singing girls.

Strangely enough, President Obama even gets a cameo in this book. I'm a little concerned that Powell is only playing to one side with this portrayal. Obama complains that he's being accused by "whackos" that he's "now a socialist witch doctor out to perform Mengele-style experiments on infants in order to brainwash them into becoming Muslims." What is funny and maybe slightly bi-partisan is Obama's comment that the accusation doesn't make sense, because "babies can't even vote." To me that may be a commentary on the importance of securing more votes and better public opinion. Honestly, I'm not sure why the President is even in the book. What's he going to do against Godzilla? Maybe it's a foreshadowing that the monsters will be worldwide, not just in Japan. If Godzilla had only emerged from the Atlantic Ocean, the US could have asked NATO to attack him! There is a funny running gag where three characters, including Obama, evoke the same seven letters when faced with Godzilla's rampage: "You have to be @%$#ing kidding me." That was fine for the first issue, but I don't want to see it overused or it will get old real quick.

One thing I didn't like seeing at all was the AD for another Godzilla book, a five-part mini-series called Godzilla: Gangsters and Goliaths. It looks promising, but I not exactly ready for another title right now. Why not give us and our wallets a little breathing room? While I'm making suggestions, I have one more -- IDW get Herb Trimpe to draw some covers for you. He's still the best Godzilla comic artist of all time! 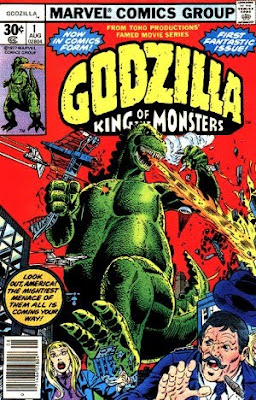 "We've been together since way back when...
We're still having fun, and your still the one"

It's like seeing the first 10-minutes of a 10 year television series. Sets you up quickly, but leaves you wanting more.
Posted by Matthew at Saturday, April 02, 2011