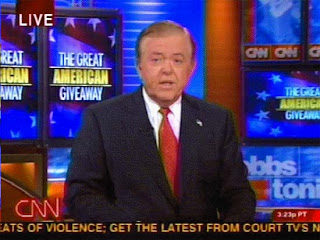 So as many of you know, many weeks ago Jim offered blog readers a free copy Lou Dobb’s new book “War on the Middle Class”. And, because nothing really ever comes for free, Jim added the stipulation that you had to read page 50. Honestly, I have to say, I was on the edge with this offer.

On one side was my overwhelming greed to get a free book. It wasn’t my first choice of books but it was free. My greed was marginally held in check by my natural aversion to reading anything that doesn’t have pictures in it.

Well, sadly, I lost the battle and I must admit that my greed overcame my common sense because I asked for a copy of the book. AND, in less than three weeks, I completed my task and read page 50. DOUBLE AND, much to my surprise it was quite good. In fact, it was good enough that I am actually considering reading page 51!!!! What can I say, I curious to see who Lou’s father is but I have a stinking suspicion that it’s the masked, evil doer with the laser sword.

BUT, I get ahead of myself. Let me tell you what occurs on page 50… it starts simply enough in mid-sentence and rambles on for a couple of more sentences. Something about government, to many lobbyists, and screwing the little man when suddenly Lou’s faithful sidekick, Han-Rambo-Luke is introduced. For the nitpickers, it’s about halfway down the page, third paragraph, fifteenth word, with “Suddenly, Lou’s faithful sidekick Han-Rambo-Luke appeared on a beam of shimmering light!”

Well, Han-Rambo-Luke is sick of the political manipulations of the government and starts hunting down Senators and Representatives. It turns out that the members of congress aren’t really helpless because each has his or her own private army. After a series of gun battles, the congressmen realize their only hope to defeat Dobbs and Han-Rambo-Luke is to join forces. So the two greatest armies, the Pelosities and Lottans, marshal their forces for a final battle at the King’s Dominion theme park.

Don’t get me wrong, there were certain parts that stretched common sense, such as the roller coaster just happens to be equipped with multi-direction flamethrowers (yeah right!). Now, I understand the need to tell a good story but seriously, everyone knows roller coasters can only be equipped with UNI-directional flamethrowers. And the way Dobbs managed to steer the speed boat, battle the alligator on board, and take out the battleship at the same time was a little weak but other than that it was good action/adventure.

Finally, there were some real touching moments as Han-Rambo-Luke learned that his father may actually be working for the Republicans and Dobbs having to talk him down from the edge.

I won’t lie. I was expecting paraphrasing of Jim’s usual rants against the political machine but this was really a good book. Between the action and character development I have to recommend that you read page 50 of the book. And, as stated I liked it so much I might actually read page 51.