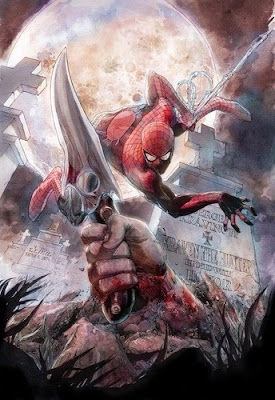 For more than a year, the Amazing Spider-Man has been published thrice monthly. It’s unfortunate that during this time, the book has been overshadowed by the story that preceded it, because honestly, the overall quality of this book is the highest it’s been in years. Reading Spider-Man hasn’t been this good since the first half of JMS’ run on the title and you’d probably have to go back a decade or so before that to find anything approaching this level of quality.

The second year of the title, which has added comic veterans like Joe Kelly and Mark Waid to the book, has been particularly strong. Largely focused around a storyline called the Gauntlet, it has thrown Spidey’s villains (all of which have been slightly retooled or updated) back at him in quick succession. Most of the stories have been pretty good, in particular the Shed storyline, which just wrapped up and had the comics internerd abuzz over its new spin on the Lizard.

Seeded throughout this story was Kraven the Hunter’s family, who was manipulating Spidey’s run ins with the villains from behind the scenes, all in an attempt to wear Spidey down. This issue brings their plot to a head with the Grim Hunt story arc. To be honest, while I’ve largely enjoyed the Gauntlet, the Kraven bits of the story always felt a bit tacked on to me and I never paid them much mind. So imagine my surprise when the first issue of the Grim Hunt turns out to be one of the best issues of Spider-Man in a year, and considering that this issue involves 2 Spider-Women, a Spider Clone, and Madame Web, that’s saying something.

While suffering from swine flu, Peter’s recuperation is interrupted by Kaine, the super strong, super crazy spider-clone brought back a few story arcs ago. He’s been messed up by the Kraven family who is hunting c-list spider related characters. Peter goes to save the Jessica Carpenter Spider Woman and after an awesome fight, escape to Mattie Franklin Spider-Woman’s apartment where they are confronted by the corpse of Ezekiel, the Spider avatar guy from JMS’ run. Turns out the Kravens are hunting spiders. Meanwhile, the Kravens sacrifice Mattie Franklin in a in a ritual that resurrects some Kraven who is not Kraven the Hunter.

Joe Kelly does a fantastic job of establishing the story’s foreboding and threatening mood right out of the gate and lends a real sense of menace to the Kraven family and their threats. He also does a remarkable job making us care about Mattie Franklin in a remarkably short amount of time. The tone of the story almost feels alien in a Spider-Man book, but the voices still all sound right and it really sets the story apart.

Equally impressive are Michael Lark and Stefano Gaudiano’s outstanding artwork. Stark and realistic, it perfectly sets the tone of the story, from Peter’s first bloody meeting with Kaine to the brutal fight with the Kravens. It’s also a fitting heir to the art style we have expected on Kraven stories ever since Mike Zeck drew Kraven’s Last Hunt.

Another great part of this book is the back up material. I know that Jim is declaring fatwas against $3.99 books with a regularity that would make Mullah Omar blush, but I think even he would agree that this book gives you your money’s worth. In addition to the regular sized lead story, it also contains a back up story about Kraven the Hunter shortly before Kraven’s Last Hunt, the definitive Kraven story. Fittingly, it’s written by that story’s author, J.M. Dematteis and is beautifully drawn by Max Fiumara. Its a good portrait of the dead guy the characters in the main story spend the rest of the book talking about so much.

The second back up is the beginning of a new 12 month strip by Stan Lee and Marcos Martin. Each month will publish 2 pages and quite frankly, it’s amazing. Lee’s contributions are charmingly retro, but what sells the simple story (two thugs use a crazy machine to escape into a fictional Spider Man comic), is Marcos Martin’s gorgeous artwork. Honestly, if these two pages were the only extra, the book would be worth its $3.99 price tag. The art is THAT good.

Bottom line, this is a great start and completely drew me in to a storyline I hadn’t really been looking forward to. Honestly, if Shed hadn’t been so good, I’d probably be even more enthusiastic about this issue. It’s a shame that the One More Day garbage is overshadowing this book, because it’s top to bottom quality. Check this one out, cause its great Spider-Man stuff and Joe Quesada won’t be raping your childhood until the next story arc.
Posted by Greg at Tuesday, June 22, 2010