One more One More Day 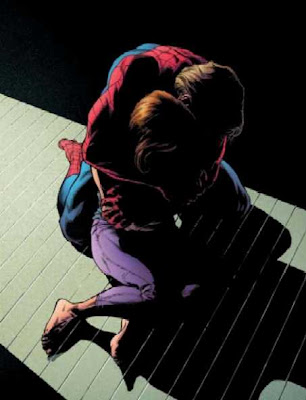 I really didn’t intend to write about Spider-Man that much on the blog, but here we are again. Jim recently wrote a piece on here about the upcoming One Moment in Time storyline. Now, I find talking to Jim about Amazing Spider-Man, enormously frustrating. I agree with the basic premise that the marriage and Mary Jane really didn’t need to go. However, if you’ve been reading the book (which is not by the OMD creative team), I think it’s evident that in spite of that, it has been solid to very good. In fact, it’s been WAAAAY better than the back half of JMS’ run. However, I cannot convince Jim and others of the same opinion to overlook that and just try the book. Here’s what’s more frustrating, in his latest post, Jim is 100% completely right about One Moment in Time.

I cannot understand what Marvel is trying to do here. Bringing back Joe Q and revisiting One More Day is only going to piss people off. It’s poking the wound with a stick and rubbing salt in it. One More Day was sloppy storytelling. They had a change they wanted to make (single Spider-Man) that really couldn’t be cleanly accomplished through an organic story (killing MJ or a divorce, let’s say) so they did a big continuity reboot. Now, if I remember correctly, the big disagreement between Joe Q and JMS was basically that JMS wanted to explain the various changes to continuity, while Joe Q just wanted to make Peter single, change the relationship he had with MJ from a marriage to a long term relationship, bring back Harry, and ignore the rest.

Now, both of these are bad approaches to a bad idea, but I have some sympathy for Joe Q’s position. If you’re going to do a reboot, make your changes, stick to guns and move on. That is what made John Byrne’s Superman reboot so successful. He did what he wanted to do, moved on with that, and stopped talking about what he had rebooted! Yes, Byrne was working with what I think was a better idea, but it remains smart approach to instituting these changes. If you’re giving someone quality stories in the new status quo and plowing forward, they’ll be less inclined to bitch about losing the old status quo. Which of course, brings us to the problem of One Moment in Time.

WHO CARES WHAT HAPPENED ON THEIR WEDDING DAY?! There is no possible answer they can give that will satisfy fandom. Like Jim said, all it is doing is reminding people about what pissed them off in the first place. It is a small piece of continuity that I’m sure they felt they needed to address when they wrote One More Day, but its two plus years later. We don’t want to know about it!

Right now Spider-Man is knocking it out of the park on the Grim Hunt arc. And even better than that, the Grim Hunt is a storyline they’ve been building too for a year! How often do comics get that right!? We’re getting extremely high quality Spider-Man comics three times a month, it has a tremendous head of creative steam right now! We should be focusing on that. Instead, we’re talking about One More Day. Again. Isn’t this fun?

Now, anyone who has been enjoying this title has been set back years in trying to get anyone like Jim to read this book again. We could get the best year of Spider-Man ever, but no, they’ll pass because One More Day left a bad taste in their mouth. And you know what? Marvel totally deserves it, because they WON’T. STOP. TALKING. ABOUT. IT.

I don’t agree with the end of the Spider-Marriage, but at this point, I just don’t care anymore. I’m sick of everyone talking about it. I just want to read some good Spider-Man comics. So Marvel, I’m begging you: PLEASE stop bringing this up.
Posted by Greg at Tuesday, June 29, 2010