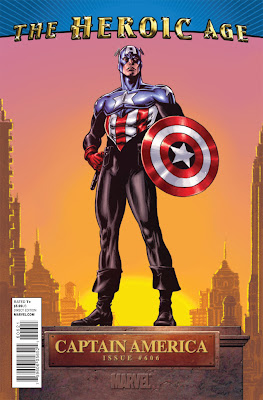 Rusty, the owner of this blog’s favorite comic shop and a fellow traveler in Orioles misery, recently noted that the malaise that tends to surround some of our favorite super hero comics. Just a few years ago, we all couldn’t stop raving about books like Daredevil, Green Arrow and Captain America. Much later in the runs of the same creative teams, we feel a bit luke warm on them. Why has this happened? Has there been an appreciable drop in quality? Have we just grown a bit tired of the same old routine? Are they dragged down by the overarching continuity of the universe the books inhabit? As a test case, let’s take a look at Captain America #606.

Now, most us fell in love with this book back when Brubaker was not only bringing back Bucky, but bringing him back as the Winter Soldier - a cyborg Russian Assassin with amnesia. That Brubaker managed to make ANY of that work is a minor miracle and a testament to his skills as a writer. The book transitioned then to the Death of Captain America, which was one of the best examples of how to make a crossover work for your book that I have ever seen. Finally, we watched Bucky become the new Captain America.

This book has always been a bit of a slow burn, but it always was clearly leading somewhere. I think fandom’s opinion of this book dropped off a bit when the book followed up the rather extraordinary arc of Bucky becoming Cap (climaxing with Bucky saving the Presidential candidates from the Red Skull), with an arc poking around his history as the Winter Soldier, where he actually puts the Winter Soldier costume back on. Not a terrible story, but it sucked the momentum out of the book. That was followed up with Captain America Reborn, which I liked, but was about Steve Rogers, not the Cap who was headlining this book. Next was a story about the 50’s Cap, which again, took Bucky out of the Cap costume and put him back in the old Bucky costume. 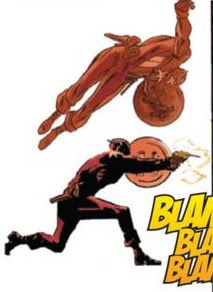 I think the decline in interest in this book can be attributed not to any drop in quality, and there really isn’t much intrusion of the overall Marvel Universe in this book itself (unless you count Reborn). Simply, I think the problem with the book is the simple lack of momentum. This book spent years setting up Bucky as Captain America, a legitimately new status quo. It followed that up with … two stories focusing on his past, with him actually wearing his old costumes, and another where we focus on Steve Rogers, the old Captain America. While nothing the book has done has been as big as misfire as say, the first issue of the new LSH title, it seems to be spinning its wheels instead of moving Bucky’s story forward. Which is why I think #606 has been so well received.

We’ve got Bucky back in the costume, being Captain America. Steve Rogers and Falcon are there, but they feel like supporting cast and the book is once again, focused on Bucky and how he’s adapting to being the new Cap. But what really sets it apart is the new story arc it’s beginning. Using Baron Zemo, whose father supposedly killed Bucky back in WWII, is a stroke of genius. This is such a no-brainer match up, I can’t believe that it hadn’t even occurred to me before this book’s solicits came out. Zemo, another man who’s trying to change his associations to his past, but can’t let it go, is a perfect villain for this new Captain America.

Yes, this arc is drawing on Bucky’s history, but it feels like we’re finally moving forward with the story of Bucky becoming the new Captain America, and that is enormously refreshing. Even noted DC partisans like my co-blogger Jim are coming back on board with it.

While the story in this issue works extraordinarily well, it is also helped enormously by Butch Guice’s art. Ed Brubaker’s entire run on Captain America has been pretty clearly inspired by Jim Steranko’s short run on Cap, but that has never been more evident than with Guice’s art. He excels at the action scenes and does an excellent homage to Steranko’s more psychedelic imagery with Bucky’s nightmare. He is equally adept at handling the quieter moments, such as the Falcon and Steve Rogers trying to talk to Bucky about his self-destructive streak in the bar.

I don’t think there’s been a drop in the quality of the writing and art of this book over the past year or so, but there has been a lack of forward progress. And for whatever reason, this issue feels like it has that in spades. But perhaps the solution is simpler than that. Perhaps it’s the same lesson we learned from the Indiana Jones movies: when in doubt, just use Nazis.
Posted by Greg at Tuesday, June 15, 2010