Jim: Lee is in the process of getting his family to France so he can move in for the long haul. Since Greg was kind enough to step in for me last month, he is picking up for Lee this month.
Greg: Ahhhh, c’est la vie. I hope you all enjoy this review, as it will be the last one before Lee comes back sounding like Batroc ze Leaper! 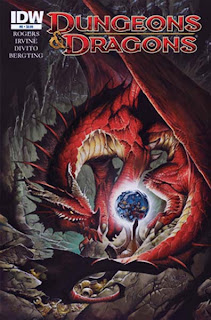 DUNGEONS & DRAGONS #0
Written by John Rogers, Alex Irvine, art by Andrea DiVito, Peter Bergting, covers by Paul Renaud, Wayne Reynolds.
Step into the world of DUNGEONS & DRAGONS! Take your first strides on a long and majestic adventure -- fight to stay alive -- fight for honor -- fight for glory!
In this special issue you'll get two stories introducing you to the upcoming D&D worlds, and exclusive behind-the-scenes content, too. All this leads up to the thrilling release of DUNGEONS & DRAGONS #1 in November and a DARK SUN limited series in January.
24 pages, $1.

Jim: Wow D&D has been around forever now and when I first heard about it I thought they made comic geeks seem cool by comparison. I have never got into RPG stuff, but IDW is building markets in many segments outside the normal comic book store crowd, which is a smart idea.
Greg: I’m with Jim here, for all my nerdy faults, I have never gotten into RPGs. I’m sure someone did a D&D comic at some time, so this is probably a safe risk for them. Not really my thing, but IDW does deserve credit for getting a surprisingly impressive creative team on this book, John Rogers (Blue Beetle) and Andrea DiVito (Nova, Annhilation) have both done solid work. 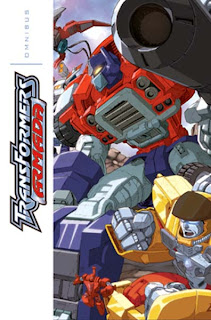 TRANSFORMERS: ARMADA OMNIBUS
Written by Chris Sarracini, Simon Furman, art by James Raiz, Guido Guidi, Don Figueroa, covers by Figueroa.
The DECEPTICONS, feeding off the energy of captured MINI-CONS, are about to begin a hostile takeover of the TRANSFORMERS' home planet, CYBERTRON. Do OPTIMUS PRIME and the heroic AUTOBOTS stand a chance of defending the planet against these super-powered villains? And will the MINI-CONS ever get their freedom back? The action is so explosive that the shock waves will shake not only CYBERTRON but even planet Earth right down to the core!
424 pages, $24.99.

Jim: See this is something else I remain relatively unaware of, the Transformers. It must have one heck of a strong market to justify having an Omnibus edition of 424 pages about Armada (whatever that is).
Greg: I’m not that into Transformers either. I know that fans of this stuff seem to love Simon Furman, so they’ll probably enjoy this? Wow, a second entry agreeing with Jim. Someone mention Bendis so we can yell at each other! 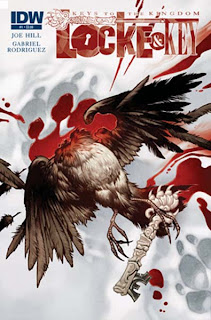 LOCKE & KEY: KEYS TO THE KINGDOM #1
Written by Joe Hill, art and cover by Gabriel Rodriguez.
As the new arc begins, Bode Locke discovers a key that unlocks the world of tooth, fang, claw, and feather, in a story that leaves hundreds dead! Hundreds of birds, that is. No. Seriously.
32 pages, $3.99.

Jim: This is the fourth arc on this book and it is absolutely one of the best written and best looking books on the market. It goes under the radar at my store, but well worth reading. It does need to have an ending sometime in the future.
Greg: I’ve never read this, but a lot of people whose opinions I respect (and Jim) have recommended it to me. I may have to try this out. 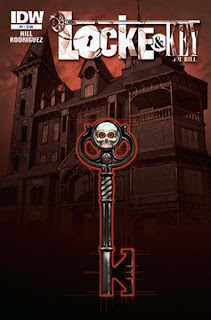 LOCKE & KEY: WELCOME TO LOVECRAFT #1 -- LEGACY EDITION
Written by Joe Hill, art and cover by Gabriel Rodriguez.
Welcome to Lovecraft, Mass, home of the acclaimed Locke & Key series! This is where it all began, and now, in this value-priced, extra-length edition of the first L&K issue, get the original 32-page story, as well as an 8-page recap of where the series as gone before as we unlock the latest, greatest chapter in the ongoing saga!
40 pages, $1.

Jim: Also I’m picking this book to show how smart IDW is with their material. Here is a chance for a fan to get caught up with the series for a $1 and still see a complete issue of a comic. With a series like this it is important to try ways to invite people into the series as the back story they have missed gets so complex it may scare off new readers.
Greg: I’ve always thought the $1 re-releases of first issues were kinda pointless, mostly cause I’ve already read the ones from the Big Two. This, on the other hand, is perfect for me. Good job, IDW! 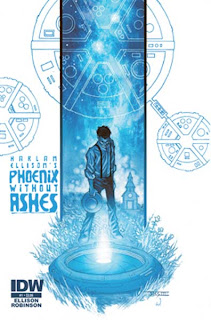 PHOENIX WITHOUT ASHES #1
Written by Harlan Ellison, art by Alan Robinson, cover by John K. Snyder III.
Harlan Ellison, one of the Grand Masters of science fiction and a multiple Hugo-, Nebula-, and Edgar Award-winner, returns to his roots.
with the graphic novel, Phoenix Without Ashes. The year is 2785, and Devon, a farmer banished for challenging his community's Elders, discovers a secret that changes everything he knew about the world, leading him on an adventure beyond his understanding and a quest to solve a mystery beyond his understanding before his entire world is destroyed in cataclysm.
32 pages, $3.99.

Jim: Harlan Ellison was the man – BACK IN THE SIXTIES AND SEVENTIES. I worry if he still has the ability he once had as a writer. I mean people trot out Stan Lee every few years to abject failure of concepts and writing. I’m not saying age is a barrier, I’m just saying it is not always the same passion you have at a younger age.
Greg: I really really really hope that Harlan Ellison reads the online reaction to this book. I’m sure the famously thin skinned Ellison’s response he has to that will be more entertaining than anything he could ever write. Unless it was edited by NBC first. 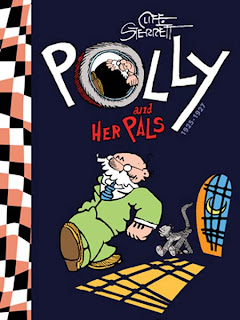 POLLY AND HER PALS, VOL. 1
Written, art and cover by Cliff Sterrett.
IDW's Library of American Comics launches its new oversized hardcover "Champagne Edition" series with what historians and critics consider one of the essential masterpieces of comic strip art, Cliff Sterrett's Polly and Her Pals. Polly and Her Pals: Complete Sunday Comics, 1925-1927 reproduces every one of Cliff Sterrett's dynamic full-color Sunday pages from 1925 to 1927 in a large 12" x 16" hardcover format so that it can be fully appreciated. The pages also include Sterrett's topper strips, Damon and Pythias and Dot and Dash. Edited by Dean Mullaney, the book contains the detailed background and biographical material that helped earn The Library of American Comics the prestigious Eisner Award. The cover design is by two-time Emmy winner Lorraine Turner, who teams up with Mullaney on the overall book design.
176 pages, $75.

Jim: There is obscure and then there is Polly and Her Pals. I hope they did some research and I’m guessing they are looking at a very limited print run as $75 for 176 pages is extreme.
Greg: Honestly, I think IDW has a bunch of people chained to tables creating “classic” comic strips so they can charge these prices for so little material. 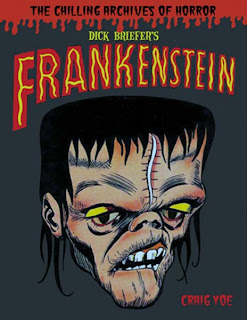 DICK BRIEFER'S FRANKENSTEIN
Written, art and cover by Dick Briefer.
The first volume in Yoe Book's thrilling new series, "The Masters of Horror Comic Book Library," fittingly features the first and foremost maniacal monster of all time... Frankenstein! Dick Briefer is one of the seminal artists who worked with Will Eisner on some of the very first comic books. If you like the comic-book weirdness of cartoonists Fletcher Hanks, Basil Wolverton, and Boody Rogers, you're sure to thrill over Dick Briefer's creation of Frankenstein. The large-format book lovingly reproduces a monstrous number of stories from the original 1940s and '50s comic books. The stories are fascinatingly supplemented by an insightful introduction with rare photos of the artist, original art, letters from Dick Briefer, drawings by Alex Toth inspired by Briefer's Frankenstein -- and much more!
112 pages, $21.99.

Jim: I give credit to IDW for reprinting some of this stuff, but I have to wonder how small a market segment they are going after. I mean this stuff has to have a fan base, just no one I know. At least this is an affordable format and if I was tempted I could consider this a lot faster then Polly and Her Pals at $75.
Greg: I know these are designed to be targeted at a small audience, and anything with Alex Toth art is worth at least a flip through, but I’m with Jim here. I don’t know who the audience for this stuff is and I’m slightly shocked there’s enough of them to justify this release.

Jim: IDW is very aggressive and I see them becoming the #3 publisher very soon. They are marketing away from just the direct market and have announced the digital copies of their books will be released a month after the print version and for half the price. I’m expecting them to try simultaneous releases of print and digital next. The direct market stores will have to batten down the hatches and try to change with the times or go the way of many book stores (who have closed many locations) or worse CD stores.
Greg: IDW is pursuing an interesting publishing strategy, but I’d like to see more original stuff from them and less $100 collections of obscure newspaper strips from the 50’s. But if they keep publishing them, there must be an audience somewhere. And that brings an end to a surprisingly agreeable month in review.
Posted by Jim at Thursday, June 03, 2010