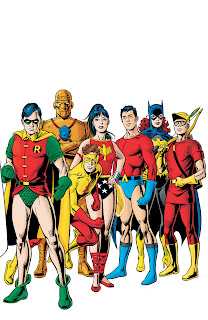 DC UNIVERSE LEGACIES #4
Written by LEN WEIN
Art by JOSE LUIS GARCIA-LOPEZ & DAVE GIBBONS and JOE KUBERT with SCOTT KOLINS
Cover by JOSE LUIS GARCIA-LOPEZ & DAVE GIBBONS
1:25 Variant cover by JOE KUBERT
The DC Universe moves forward and evolves when a new generation of heroes inspired and mentored by the Silver Age’s greatest come together to fight the good fight. Robin, Kid Flash, Speedy, Wonder Girl and Aqualad – the Teen Titans hit the scene! At the same time, heroic humans without powers reunite to remember Sgt. Rock in a story by Joe Kubert!
Retailers please note: This issue will ship with two covers. Please see the Previews Order Form for more information.
On sale AUGUST 18 • 4 of 10 • 40 pg, FC, $3.99 US
Jim: I’m sure Gwyneth and Gregory are enraptured with this series. I understand the internal appeal to doing a series like this, not sure the market cares about this book. At ten issues the hard cover becomes too big to be a successful evergreen type product.
Gwyneth: No one wants character to move forward and evolve Jim - don't be ridiculous.
Gregory: I love that DC got such a cutting edge writer like Len Wein on this! I love what he’s doing on Swamp Thing and I hope no one ever changes it! 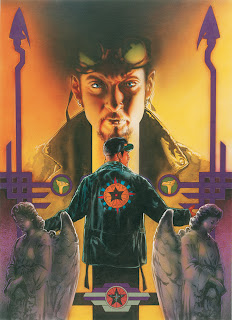 STARMAN OMNIBUS VOL. 5 HC
Written by JAMES ROBINSON, DAVID S. GOYER & GEOFF JOHNS
Art by PETER SNEJBJERG, STEVE YEOWELL STEVE SADOWSKI, LEE MODER, TONY HARRIS and others
Cover by TONY HARRIS
In this fifth hardcover, Starman embarks on a personal space odyssey to find the long-lost brother of his girlfriend. But when a chance encounter sends Starman sprawling through time, Jack shares an adventure with the Legion of Super-Heroes, battling aliens alongside Adam Strange and meeting Superman’s father. Collects STARMAN #47-60 and 1,000,000, STARS AND S.T.R.I.P.E. #0, ALL STAR COMICS 80-PAGE GIANT #1 and a story from JSA: ALL STARS #4 (2003)!
On sale OCTOBER 6 • 464 pg, FC, $49.99 US
Jim: This was James Robinson’s best work and his seminal work in my opinion. A really great story and shows why moving different people into the role of a hero makes a more interesting story.
Gwyneth: Anything with the Legion of Superheroes gains my interest.
Gregory: Is this one of those indie books? If he’s a superhero why isn’t his underwear on the outside. This book makes me uncomfortable and introduces feelings I’m not equipped to deal with. 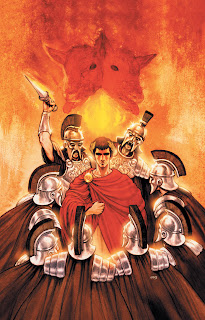 IDES OF BLOOD #1
Written by STUART C. PAUL
Art by CHRISTIAN DUCE
Cover by MICHAEL GEIGER
The year is 44 B.C. Julius Caesar has conquered Transylvania, and vampyres are Rome’s new slave class. But when rich mortals start turning up dead with fang marks on their necks, Valens, a vampyre slave-turned-Roman soldier, plunges into the blood-soaked underworld of Rome to capture the Pluto’s Kiss Killer. If he can prove himself, he’ll earn rank and riches beyond what anyone this side of the Tiber has ever seen! But if he fails, he just might find himself on top of the pile of bodies!
Don’t miss this crimson-red, 6-issue thriller that mixes the undead intrigue of True Blood with the brutal Roman action and political drama of Spartacus from newcomers Stuart C. Paul and Christian Duce!
On sale AUGUST 18 • 1 of 6 • 32 pg, FC, $3.99 US
Jim: At this point I ready for more Zombie books again. How about a little Werewolf love?
Gwyneth: What? I mean seriously, who thought this was a good idea? My mind has now been overloaded by nonsense.
Gregory: I don’t understand. Is this about red kryptonite?
In a stunning change (read new editorial mandate) the modern version return and Gwen and Greg are back to continue their comments. 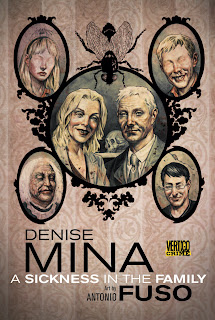 A SICKNESS IN THE FAMILY HC
Written by DENISE MINA
Art by ANTONIO FUSO
Cover by LEE BERMEJO
“Cunning, deft and deeply disturbing, Mina’s work plays with your expectations and messes with your head, winding its way along a truly dark path to an ultimately inevitable conclusion that will leave you walking with its echoes for days to come.” – GREG RUCKA (DETECTIVE COMICS, the Atticus Kodiak novels)
Denise Mina, award-winning crime novelist, brings her psychological style of crime fiction to Vertigo Crime.
Meet the Ushers. The parents, Ted and Biddy. Grandma Martha. The three kids, William, Amy and Sam. Just a normal, middle-class family gathered around the table on Christmas Day. Until they start dying. Violent deaths. One by one. Is there a curse on their house, as a recently unearthed history of witchcraft in the area would suggest? Or has one member of the Usher clan declared open season on the rest? As secrets and resentments boil to the surface, it becomes clear that more than one Usher has a motive for killing off the others. But in the end, the truth turns out to be far more shocking than anyone in this ill-fated family could have imagined.
On sale OCTOBER 13 • 5.5” x 8”, 192 pg, B&W, $19.99 US • MATURE READERS
Jim: I’d rather take a flyer on this book then most new comic series, especially when so much of what is being done is rehashes of yesteryear.
Gwen: Now that I'm Gwen again, have I regained my ethnic identity? Beyond that though, is this some sort of rework of Poe's House of Usher? I don't know how interested I am, Poe's original story was enough Usher family for me.
Greg: Now that I have escaped the silver age, I really want to read this, even though I was disappointed by her run on Hellblazer a few years ago. 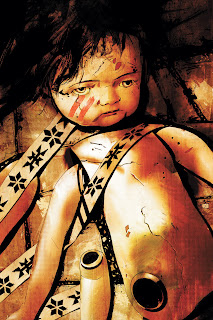 SCALPED #41
Written by JASON AARON
Art by R.M. GUERA
Cover by JOCK
Dash Bad Horse and his ex-girlfriend have both worked hard to get their lives in order, but now they may be torn apart again by the one thing that’s a bane for them both: Family.
On sale AUGUST 25 • 32 pg, FC, $2.99 US • MATURE READERS
Jim: Just want to say that if you are not reading this book, you should be reading this book. An absolute fantastic book.
Gwen: See what Jim said above.
Greg: World’s best noir comic? Or world’s worst Indian Casino travel brochure? U-DECIDE! 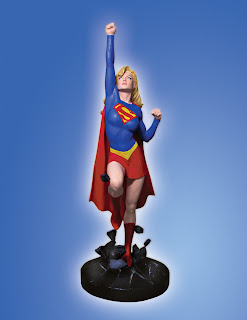 COVER GIRLS OF THE DC UNIVERSE: SUPERGIRL STATUE
DESIGNED BY ADAM HUGHES • SCULPTED BY JACK MATHEWS
SMASHING!
With strength and speed, the Girl of Steel blasts up through soil and stone, shattering solid rock, shooting into the stratosphere. As the Kryptonian cousin of Superman, Kara Zor-El has her sights set on the stars, streaking through the heavens in a supersonic blur – a soaring symbol of justice and truth.
Supergirl is the latest hero to join the stunning COVER GIRLS OF THE DC UNIVERSE statue series, with fan-favorite artist Adam Hughes specially commissioned to design Supergirl for this smashingly successful series.
Hand-painted, cold-cast in porcelain and measuring approximately 11.75” high x 4.25” wide x 5” deep, this statue is packaged in a 4-color box.
Limited Edition.
On sale January 12, 2011 * Statue * $99.99 US
Jim: So I have cut back on hard covers and comics (a little) and now statues are calling to me. I think I need a 12 step program.
Gwen: Does she sell make-up too?
Greg: Do I really want to know who these are targeted to?

Jim: Not a lot of new stuff from DC. I think May was the month to release all of their new series and now we are awaiting Comic Con in San Diego for all the big announcements.
Gwen: Well, I'm glad to be back to my modern self.
Greg: I’ve escaped the silver age, but what if I start being written by Dan Didio! NOOOO!
Thanks Greg for stepping in for Lee and maybe we will try DC with four of us for next month.
Posted by Jim at Thursday, June 17, 2010