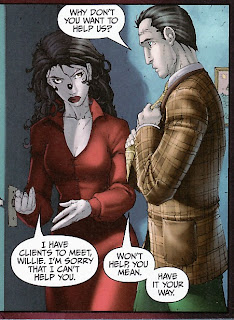 I felt left out with all of Jim and Lee's reviews so I thought I'd do a post of my own today :) A few weeks ago Jim started sending me a new series from Marvel, a comic adaptation of Laurell K Hamilton's Anita Blake books. Now I know that Jim sent me these books because they're about a vampire hunter who gets to deal with the entirety of the supernatural world, not to mention raising the dead in her spare time - but honestly I was a bit wary. The reason I had never picked up any of the Anita Blake novels (and as a fan of sci-fi and fantasy I'd come across them more than once) was because of the way they were advertised. I got the impression that they were pop culture goth/romance/vampire books. Well, I was right and wrong at the same time. The Anita Blake comics were interesting enough to get me to pick up the novels, and now I'm hooked.

This is the second time I've been persuaded into reading popular sci-fi (which I usually hide from as I'm very picky about my sci-fi/fantasy books... it's really easy to get a bad one - I still refuse to read Robert Jordan!) by a comic book adaptation. The first was Homelands by RA Salvatore, and now I have Anita - which, by the way, doesn't get romance-esq in style until maybe the 6th book, and even then there's still plenty of mystery and action. Anyway, back to the actual comic book!

For starters, the book is being adapted by Stacie M Ritchie - whom I have never heard of before. She's obviously a fan of the Anita Blake books, which is good and she's doing a nice job so far. The dialogue has retained the spirit of the novels while still being accessible to a new reader. I will say there were a few confusing moments before I read the novels, but beyond that the adaptation has held up.

Brett Booth is doing the pencils, and while I'm aware he has a fan base I'm not sure I'm one of them. His art is beautiful, no doubt about it, but men are NOT his strong point. His women are fantastic - he manages to give them all distinct qualities while still retaining his style, but his men are too stylized. They all blur together, which isn't going to make the female Anita Blake fans happy. So far his best male character has been Willie McCoy who's a minor character in Guilty Pleasures. He can't seem to draw Jean-Claude (a major character in the Blake books) without making him look dull and vacant - which doesn't define the character at all. I wish he'd pay half the attention to his male characters that he does to his female characters. Another thing - some of his expressions are wonderful, he can truly convey some emotions - he's especially good with exasperation. But he's really weak with panic and fear - which could pose a major problem in drawing this series. 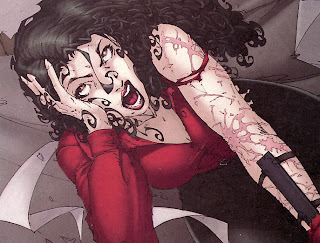 So, overall the art is pretty, but I think there is still growing to be done.

For those of you who will never pick up the novel, I'd still recommend trying out the comic book. It's vampire hunting/zombie raising/murder mystery/gun slinging/bachelorette party fun at it's best and promises to continue to be a quality book. 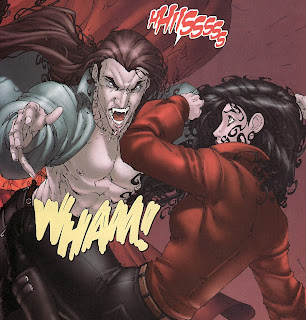 Oh yeah, and don't forget to tip your vampire strippers!