If you didn't know, I love anthologies. They are a great way to sample lots of up and coming writers and artists and get novel stories. No anthology series is ever 100% but nothing ever is. This week, I read the Marvel Monster HC or the Marvel Westerns HC anthologies. While both have pro's and con's they could be worthy additions to your bookshelf. 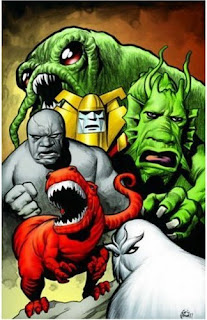 Marvel Monsters was released first and collects the 5th week event of the same title. This book is a fantastic interpretation of Marvel's monster books of the 60's. There are short stories by Peter David, Jeff Parker, Keith Giffen, Duncan Fegredo, Eric Powell, Mark Farmer, Steve Niles, Tom Sneigoski, and Roger Langridge to name a few. One of the joys of the this book is the fact that the writers realize how silly the source material is. With this in mind, there isn't a "straight" story in the bunch. Eric Powell, as writer and artist, turns in a great story about Devil Dinosaur battling the Hulk. Peter David and Arnold Pander (of original Grendal fame) turn in a very funny story about a giant gorilla becoming an agent in Hollywood! Simply put, would you tell him no if he wanted his client to star in your movie???? By far, the best is by Scott Gray and Roger Langridge about a group of monster who want to go straight. Led by Fin Foom Fang, they become the FF's cleaning service! Until one of them touches the wrong button. It has a classic scene with Fin Foom Fang playing chess with Reed Richards in the park. In between all the original stories are reprints from Marvel's moster era. The stories are actually from the Atlas era, 1950's, and all feature Kirby art except one which is by Don Heck. This is really a great little collection with lots of stories, great art, and an easy way to add some marvel monsters to your collection without having to buy the Tales of Suspense Masterworks. 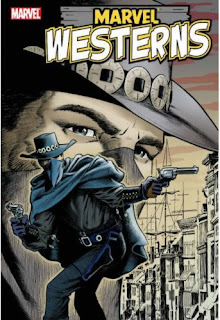 Obviously, Marvel Westerns collects the 5th week title of the same name. While not as strong, it offers some pretty good tales. There are stories by Dan Slott, Jeff Parker, Karl Kesel, Fred Van Lente, Justin Gray, Jimmy Palmiotti, Jim McCann, Steve Englehart, Joe R. Lansdale, Eduardo Barreto, Tomm Coker, Carmine Di Giadomenico, Homs, Federica Manfredi, Dave Willaims, Marshall Rogers, and Raffa Garres. This is a much more mixed bag but Karl Kesel and Carmine Di Giadomenico turn in an amazing Red Wolf story. I am not familiar with Di Giadomenico's art but it really is a sight to behold. The linework is very clean and has a certain European feel to it. The other highlight of the issue is a story by Jeff Parker and Tomm Coker. Jeff turns in a classic western with the typical "presumed inept" hero story and Coker turns in a great art job. He manages to capture to speed and brutality of a gunfight all in two very quick pages. The reprints are all 60's era Marvel Westerns. I was surprised because the Monsters HC reprinted all 50's era material. And, it should be noted, that while the 60's westerns were good, the 50's westerns from Atlas were much, much better. I can't give this the official ohh-aahh superduper recommendation because there were more just-OK stories in the collection. If you are westerns guy, and would like to have some good stories and reprints, then you might want to consider this.
These are both good collections and HC's always look good on the shelf!
Posted by Lee at Wednesday, January 17, 2007