This should be the last Jim/Lee review of upcoming books for a week or so... These are a fine mix of books that are inane, and books that we are interested in, so without further ado, the show
Lee: I hate to say this but it appears that Image has stronger offering for April than DC/Marvel. When I look at the titles I am genuinely interested in v. titles I just make fun of… why there’s a lot of good stuff. I have to say that Image has really come on strong since Larsen took over. I like a lot of what they do. Anyway, on to the reviews.
Jim : Lee I would have to disagree because DC and Marvel both have a lo t more core titles that are solid books (at least DC does). Still Image has certainly had an up tick in offerings that are intriguing.
Lee: I understand the core titles but I do think Image is doing more with less. Maybe I should clarify with I think they try more more new and different things. If I want to see the medium stretched in new ways or something other than superheroes, more and more I go to Image. If I want solid superhero, then I go to DC. 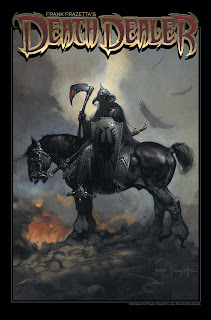 Frazetta’s Death Dealer #1
Lee: Another Death Dealer comic? Oi. But, I love the tagline “Approved by Frazetta” unlike the last Death Dealer comic from Verotik that was.. what?… unapproved? I don’t think so. Sadly, I will am interested. Clarification, interested to look at it on the stands and make a judgment call, but not interested enough to preorder!
Jim: I’m a huge Frazetta fan, but not for a comic that is about a painting of his. Pass.
Madman Atomic Comics #1
Lee: Never understood the series but it just keeps ticking. I assume it has a heck of a fan base.
Jim: I have tried a couple of times to get into Madman and I can’t. I enjoy Mike Allerd’s abilities, but Madman is another pass. 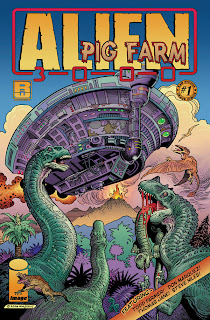 Lee: I mention this for no other reason than the awesome tag line. Don’t know if it will be any good but certainly could be a hoot!
Jim: This could be absolute garbage, but I want to pick up the first issue because it sounds so damn goofy.

Sam Noir: Samurai Detective Special Edition #1, Collects Sam Noir: Samurai Detective #1-3
Lee : So, because it was only a three issue series, it can’t be called a TPB? That’s just odd. BUT, if squarebound I might have to pick it up. The series was fun in a pointless, samurai, noir kinda way. Then again, it might be worth waiting it out to see if they combine it with the second series as one big tpb!
Jim: I missed this series, so this maybe a nice way to read it. 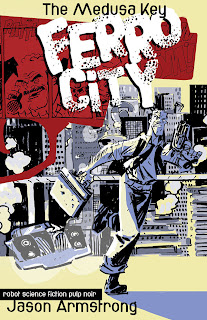 Lee: Believe it or not I am looking forward to this. This always looked really interesting to me. The art seems similar to Espinosa’s on Rocketo. And, $16 for 160 pages really isn’t that bad a deal. Besides, Robots and Detectives seem to have replaced Zombies as the “hot item”
Jim: I have no interest in this book. I have not invested any time into checking it out. There is only so many books one can read.
Lee:Art books are my weakness because, I am always willing to give a new & different style a chance. In this case, it's different enough that I may really like it. Here’s a link to some sample pages... http://www3.sympatico.ca/jason.arms/

Fell, Vol. 1: Feral City Tp
Lee: Fell was one of the Ellis books from 2006. Everything else he touched in 2006 was gold why should this be different. Really looking forward to this.
Jim: I signed up for this so I can have the series on my bookshelf. One of the great series from last year and well worth the wait between issues to keep it as an Ellis / Templesmith project.

Invincible: Ultimate Collection, Vol. 3 Hc
Lee: Another Invincible collection! Yippee. This is soooo coming home with Poppa! This is such a great series that reads well in single issue and even better in trades. On this series, Kirkman manages to pull an Alan Moore and carry plot threads for years without them being stale. Wonderful. It only makes me wonder why all his Marvel stuff is such crap!
Jim: I agree whole heartedly. I love Invincible and Walking Dead and have not really enjoy anything by Kirkman under the Marvel banner. Maybe he would do better at DC, but I hear he resigned with Marvel. Well he has a new born and needs the benefits. Still I’m looking forward to his Werewolf book coming out later this year from Image.

Rocketo: Journey To The Hidden Sea, Vol. 2 Tp
Lee: Another series that seems to fly under the radar. If you aren’t reading this you ought to be ashamed of yourself. Seriously, shamed!!!
Jim: This was a terrific 12 part series and the series had a real sense of adventure and wonder to it. I hope we see more of Rocketo in the future. 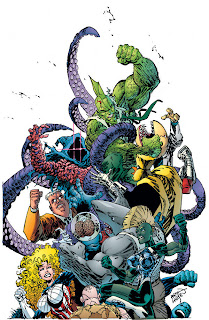 Sam And Twitch: The Brian Michael Bendis Collection, Vol. 2 Tp
Lee: Another gotta have. Bendis’s run on Sam & Twitch was his last before the rise to ultra superstardom. This some great stuff. The only question, how did I miss Sam And Twitch: The Brian Michael Bendis Collection, Vol. 1 Tp??? And, even better they wised up and made the tpb color this time!
Jim: I have never read this stuff and I have been told how great it is, but I have a problem with supporting McFarlane. His business practices have been a little shady at best.
TEXAS STRANGERS #2 story Antony Johnston & Dan Evans III
Lee; Is there a company Johnston isn’t writing for these days? Sheesh. At this rate, he will exceed the output of Bill Mantlo from Marvel!
Jim: Another pass and I have not followed any of his work that I’m aware of.
Lee; Did say I was gonna buy it... just that he is everywhre. I too shall pass... but I am getting the Wasteland trade
Posted by Lee at Sunday, January 21, 2007