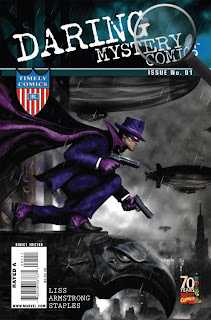 
I’m always willing to torch Marvel when they do things I dislike such as their $4 book things and pushing the digital comic option with gimmicks, but when they do something right I’m willing to sing their praises as well. Daring Mystery Comics #1 is the culmination of a great series of books that celebrated Marvel’s 70th Anniversary and the issue itself was one hell of a debut for writer Davis Liss.

First off the entire series of books was well done. Each issue gave us an original story of a golden age hero and included a reprint that tried to be representative of what the character was like in that era. If the golden age stories had been as good as the modern take on them we would still be reading about these characters today. All of the stories respected the characters and did a nice take on doing a “new” golden age story, but telling it with a modern sensibility. Remember, back in the late thirties and early forties these books were being massed produced and written for a much younger audience and with a very simplistic world view. The new stories should outshine that material, but they respected the essence of those characters. I hope Marvel does a hard cover collection of this material as it will be well worth reading again.

Now for the thing that drove me to doing a late week full blown review of a comic and that is David Liss’ debut as a comic book writer as he tells us the origin of “The Phantom Reporter”. Take the time to click on the link and read a little about David and read the FAQ, David has a great dry sense of humor, one of the best FAQs I have read. Plus after reading this comic and seeing what novels he has written I have added a couple of his novels to the list of books I need to pick up.

What impressed me was as I was reading the story I would have never guessed that this was a debut effort for writing a comic book. I have read a lot of highly touted novelist writer comics and let’s face it; for the most part it they are hit and miss, with an emphasis on miss. Writing for different mediums requires different sets of skills, but David wrote this like an old comic book pro.

It starts off in the present day and plays off JMS’ series “The Twelve”, which I hope we get to the conclusion of one day. Richard (Phantom Reporter) Jones is now the time lost hero and he is being interviewed about his life, the reporter interviewing the reporter. This segues into the Phantom Report’s origin. I think origin stories are favorites of almost every comic book fan so doing a straight origin story was a great choice. What I loved about it was that it played directly against a typical origin story. Almost every character it seems has a tragic beginning from parents being shot, planet’s exploding and an uncle killed by a burglar or something that sets them apart, not here. Life is good for Richard Jones. He has wealthy supportive parents, co-workers who respect him, a boss that is supportive of his efforts. It is such a wonderful twist on giving us a hero who is a hero because he wants to do the right thing. It is almost more heroic as he does this without the need of being taught a horrible lesson of why he should do it.

The actual story leads to what feels like a natural progression as he goes from being a reporter to putting on a simple mask and stepping over the line into being a vigilante. It ties back into a childhood friend, involves a desire for a long life with a potion to grant you that wish and a possible love interest (who it is subtly woven into the story that she is still young and vivacious today). The story unfolds page by page and you are drawn in and guided along a path that you hope that you too might follow because you want to do the right thing. A perfect origin story that remained true to “The Phantom Reporter” as JMS has presented him, but gives him the same amount of depth a character can have, even without the tragic beginning. David’s goal was to have the idea of someone putting on a mask and risk their live to try and bring justice to the world ring true and it did. I found myself identifying with Richard and admiring his willingness to put his money with his mouth is so to speak. At the same time as making Richard heroic, he kept him very human and real. The moment between his dead friend’s wife and the attraction he felt for her and his sense of feeling bad about it all at the same time was a great moment and help to define Richard.

Of course having Jason Armstrong as your artist does not hurt either. Jason has an almost indy feel to his style that has a quality that makes it seem like he could have been a golden age artist. Of course what Jason has in spades is the skill set for design, layout and story telling. Jason is not a classic super hero artist, but his style fit well into this almost noir style story. Jason has Michael Lark and Darwyn Cooke type skills. I think what impressed me the most is how well the story flowed and I have to give credit to the artist as well as the writer because this book had a great rhythm to it.

I should try and contact David and get an interview with him, because I loved this story so much and his sense of humor on his website was great. Plus as he gets into his next project with Marvel, I’m sure he will become a “name” in this business as he is really just that good. Any first issue with David Liss on it will be an automatic buy for me at this point. So - David - if you want to subject yourself to an interview contact us!

Overall Grade A – A fantastic debut issue and an obvious writing talent aided and abetted by Jason Armstrong who turned in a great art job that matched the script.
Posted by Jim at Sunday, September 06, 2009