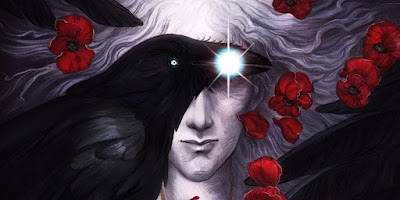 I’ve read more comics than I probably even remember reading. (Especially if they were bad.) If asked what their favorite comic book of all time was, fans will give all kinds of answers, usually based on their tastes. Books like Watchmen, The Dark Knight Returns, All-Star Superman, Uncanny X-Men, The Amazing Spider-Man, Planetary, Bone, Strangers In Paradise, Saga, Preacher, The Walking Dead, Maus, Hellboy, Locke & Key, or a myriad of others might be mentioned. Although I’ve loved all of the mentioned titles and still do, if I had to select a favorite, it would always be Sandman. 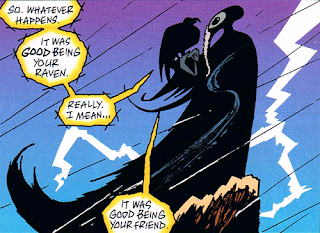 Sandman was a long running comic and one of the first to tell a complete story. The book ran 75 issues (not including spinoffs and anniversary continuations) telling its complete narrative. The world of the Sandman is mystical and magical, spanning the world of the Dreaming, the fairy realm, Earth, Hell, and many worlds in-between. The main character, if there could be considered a main character, was the Dream King himself: Morpheus. As a comic, the Sandman told many different types of stories from a variety of different point of view characters. Morpheus would be there somewhere, sometimes taking point in the story, sometimes hiding in the peripheral. Morpheus, or Dream as he was sometimes called (he had many names), was one of the Endless. The Endless were Destiny, Dream, Death, Delirium, Desire, Despair, and Destruction, and they were older than gods.

During the run of the Sandman, I read stories that were horrific, fantastical, and very human, despite some of the characters involved, all mixed with a wonderful dark humor at times. There were stories about the land of the Dreaming falling into ruin, the imprisonment of Dream, the keys to Hell, a serial killer convention, Shakespeare’s contract with Dream, an immortal man, a nightmare on the loose, old debts, failed loves, sibling rivalry, the tragedies of life, and of course, the nature of stories themselves.

I discovered Sandman late in its run. I started with the third part of The Kindly Ones, the last major long-running arc in the title. The penultimate forces working against Morpheus were already in play, having been set in motion during stories I hadn’t read yet. Nevertheless, the art by Marc Hempel, and the writing by Neil Gaiman captivated me. I didn’t know it at the time, but I would become an acolyte of Gaiman's to one degree or another. He’s still my favorite writer, in comics or novels. Once I was hooked on the world of Sandman, I went backwards and read the issues I missed, all out of order. I would eventually read it in the proper order, but it was long after the series ended. 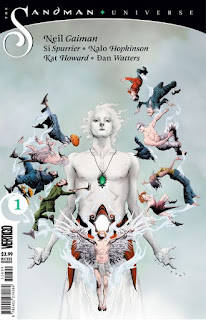 Occasionally, I get to reenter the world. In 2003, Gaiman returned to Sandman with an anthology called Endless Nights. There was a different illustrator for every story in the collection, and each one focused on one of the Endless. Most recently, Gaiman wrote the Sandman Overture, a story that tells how Dream was weakened to the point of his capture in Sandman #1. J.H. Williams III illustrated the mini-series. It was just as good as any story during the title’s initial run.

One of the most wonderful bits of comic news that I’ve been graced with as of late is that Sandman is returning to us, albeit in a very different way. DC Comics’ Vertigo Imprint is releasing Sandman Universe related titles that Gaiman is acting as a godfather/consultant on. The whole thing starts with The Sandman Universe #1 Special featuring a story by Neil Gaiman, that will also be written by his four collaborators on the Sandman Universe project. These four writers will each be launching a new monthly comic set in the Sandman Universe. These writers include novelists Nalo Hopkinson and Kat Howard, and comic writers Si Spurrier and Dan Watters. The art on The Sandman Universe #1 will be provided by Bilquis Evely with a cover by Jae Lee. 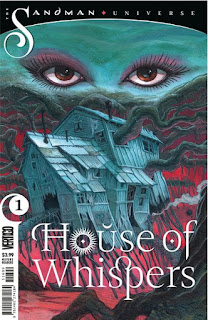 The premise of the story is that Daniel, the current incarnation of Dream, has vanished.  His absence causes chaos in the kingdom of dreams and has opened a rift between worlds. One of the books from the library from the Dreaming, a library housing all of the books dreamed about but never written, has escaped and is in the hands of children in the real world. The House of Mystery and the House of Secrets find they have another sibling house in The House of Whispers. The proprietor is Ezulie, a fortune teller many suspect is behind these strange changes in the world of the Dreaming.  Lucifer falls again, perhaps into a Hell of his own design. In London, a boy named Timothy Hunter dreams he becomes the world’s most powerful magician, but in his nightmares he becomes the worst villain in the word. The four titles spinning off from the one-shot are The Dreaming, House of Whispers, Lucifer, and the Books of Magic. 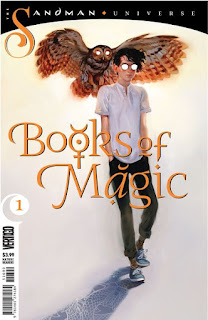 I don’t know if any or all of these books will be something I will love as much as the Sandman, but I like that Gaiman is very much involved in creating a new jump on point for other creators to write some stories set in this universe. I also have hope these books will be excellent reads. Mike Carey did write a long run of Lucifer once before, and that book handled the character even better than Gaiman did in Sandman. So anything is possible.

I’ll probably try all of these titles, though I may switch to waiting for the collections thereafter. If they’re that good, I’m going to want a more permanent copy. I have the entirety of Sandman collected as Absolute Editions after all.

If you are a lover of Sandman like me, or even if you just want to read something new and different, why don't you join me in trying these new comics?