I spent most of my life reading comics.

To be clear, I’ve had a love affair with reading my whole life, but it all started when I was five with comics. My neighbor’s son, a high school boy, was getting rid of his comics (outgrew them I guess), and he gave them to me. He just handed me a huge pile over the short fence between yards, and those comics hijacked my imagination. 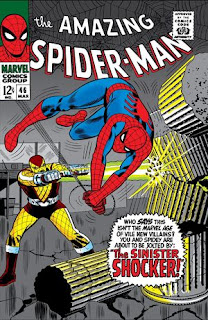 I don’t remember much about most of those first comics, but I do remember one specifically. It was Amazing Spider-Man #46. Spider-Man fought the Shocker, and for most of the story, poor Spidey had his arm in a web sling. I devoured those single issues and before I knew it, every single time my dad went to the local High’s store for cigarettes, I was begging him to let me come and get a new comic book to read. (They had a spinner rack full of comics in the back. It was a magical creation.)

I’ve read comics at all times in my life, even when people in my life frowned upon it or tried to make me feel bad about it. The haters were never a problem, though sometimes when it came from friends or family, that did hurt more. But I never gave them up, never walked away from the medium. I even read and collected comics when I spent 13 months in Afghanistan. So there.

When I was a teenager, my love of superhero comics took a slight backburner to comics like Sandman, Hellblazer, V For Vendetta, Preacher, Strangers In Paradise, Hellboy, and many other mature titles. The superhero books that interested me during this time were those that weren’t the typical fanfare. These were titles like James Robinson and Tony Harris’ Starman, Stormwatch (later The Authority) and Planetary under scribe Warren Ellis, and essentially anything Alan Moore was doing. It was during that time I went back and discovered Frank Miller’s Daredevil run and his The Dark Knight Returns.

My tastes have varied and I now find myself following creators instead of characters or titles with the occasional exception to that rule.  I’ve written countless reviews in my time and for almost six years was able to read everything that came out to support those reviews. This ended around 2013 and suddenly, I needed to buy my comics again. Needless to say, I slashed the number of titles I read as a result. When they are no longer free, you simply cannot read them all. That’s science. Or logic. Or at least, that’s what my bank account tells me. 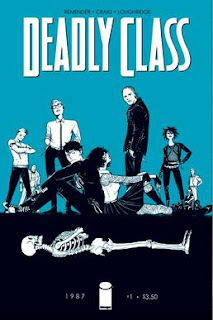 Fast forward to about two years ago. I was planning on buying a house with my lady friend (hi, lady friend!) and I packed up my comics. Because of the move, I thought it would be prudent to go to my favorite comic store, Cosmic Comix (there are many like it but this one is mine and I shall not slut myself out to other stores, amen), and make adjustments to my pull list. I whittled my list down to the bare essentials: The Wicked & The Divine, Detective Comics (this was at the start of the Rebirth soft reboot of the DCU), Deadly Class, Astro City, the new Saga trade every time it came out, and a few other titles that ended since then.

I moved but still kept getting my comics. Unfortunately, due to unpacking and a rather hectic life teaching, writing, parenting, and trying to have a life, I got to this place where I realized I was collecting my comics and not reading them. I had about two years of unread comics to catch up on. In addition, I had added The Wild Storm, Injection, and Hellblazer (mainly because the excellent writer Richard Kadrey took it over) to my list. That meant I had even more comics to read. I had so many unread comics to read that the thought of even trying almost paralyzed me.

After my birthday this year (which was January 19th, I’m still taking belated gifts if you are curious), I decided to get my comics in order and began the task of reading almost two years’ worth of comics.

I discovered I missed them. I missed them more than I thought I had. I was still reading novels and watching movies and television, but my love for comics had not sustained me through my last great life change. My five-year-old self would have been extremely disappointed in me and would probably rearrange my kneecaps if he knew.

I put my comics in order and started reading them in large chunks. I read Warren Ellis’ new titles Injection and The Wild Storm. The former is a new creator-owned series Ellis is doing with Declan Shalvey. It’s about five crazy characters that are bored with the future and unwittingly poison the 21st Century with an A.I. that is going rogue. The latter is a reboot of the Wildstorm characters in a cohesive way that Ellis is doing with Jon Davis-Hunt.  I plan on reviewing both of them here later this week, but the short version is that I enjoyed both of them for completely different reasons. And most importantly, they ignited my passion for comics again. 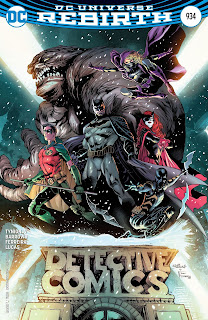 I’ve been chugging through the current masterful Detective Comics run. I love this run because it is a one-stop shop for some of my favorite (and sadly sidelined) Bat-characters. The book showcases Batwoman/Kate Kane, Tim Drake/Red Robin, Spoiler/Stephanie Brown, Cassie Cain, Clayface, Batwing, and sometimes brings in other characters like Azrael, Nightwing, and others.

I’ve also been catching up on my trade reading. If there is anything I am learning is that I need to move away from singles and pick more of these titles up as collections. They read better in large chunks of story. These are ideas I hope to cover over the next week, here and there.

I also still believe Saga is the best ongoing title coming out, but there are so many great comics now, I could be wrong. (Spoiler alert: Probably not.)

I’ve been more excited about the comics I’m reading than I have been in a long time. The third volume of Mage by Matt Wagner is coming out monthly, but I want to wait until it is collected to read it. I also started reading Ed Brubaker and Sean Phillips’ Kill or Be Killed. DC Comics has some really exciting titles on the horizon including a Jeff Lemire/Bryan Hitch Hawkman book, and of course, the Brian Michael Bendis’ Superman reboot.

I have more I want to say and this first post reads much like I cracked the egg of my head on the pavement and let my thoughts spill out to cook on the sidewalk, I know. I’ll be back throughout the week to focus my thoughts more clearly, and to offer a review or two.

I hope you’ll stop by too.