Xombi - The Series You Missed 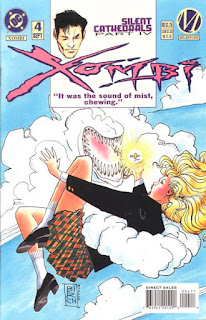 So, the answer to the quiz the other night was the little known series, Xombi, written by John Rozum, illustrated by J.J. Birch, and colors by Noelle Giddings which was one of the last books published under the Milestone Imprint from DC.  So, why did I read this?  Well, my LCS recently picked up a large collection of Milestone books and luckily he got every issue of the series.  Sometimes, you just have to take a chance on the older stuff.

This week I read the first 12 issues with issues 1-5 comprising the first arc, issues 7-11 the second, and issues 6 and 12 are the "down time" stories for additional characterization for all the characters.

These issues reminded me of the early issues of Grant Morrison's Doom Patrol before it got too weird, too random, and too esoteric.  There's a level of bizarre that you don't get from your normal superhero books and it's wonderful.

For the good and the bad, see below the break.


The prologue of the first issue involves Nun Of The Above and Catholic Girl investigating an odd occurrence which leads them to conclude that the madman Sugarman has escaped his prison!  Those three pages more than set the tone for the first year. 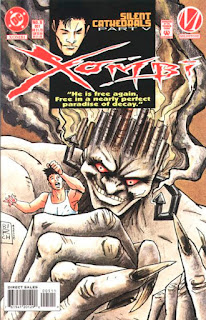 As interesting as Nun Of The Above was, the series protagonist is David Kim, a scientist infected with nanotechnology who cannot die, hence the Xombi.  I guess you could say it's Highlander with a weirdness magnet (ala Blue Devil).  He is an ordinary man who has fallen into the realm of the odd and can't seem to get out.

While the heroes are interesting, it's the villains who really make the series.  There's The Dexterity whose touch causes death from unfulfilled desires and wants which were never achieved, the Bludgeon, a blind assassin grown from misdirected rage, and of course the incarnation of pollution with the rectal stove pipe!

That isn't to say the books are perfect.  The first issue is a complete slog and I almost didn't make it to the end.  Rozum wanted to really establish the characters and settings and he did so with gusto.  It works but there are lots and lots of words.  The first arc is uneven and alternates between bursts of demented brilliance and underdeveloped concepts.  But, the "down" issues work in ways that they shouldn't and the second arc is pitch perfect. 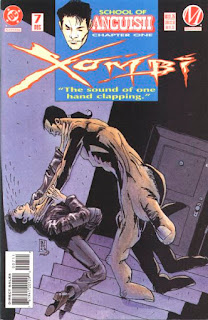 J.J. Birch, the pseudonym of Joe Brozowski, worked in comics for many, many years and was probably best known for never missing a deadline.  While his art was always good, he does something completely different here.  This is not like most of Birch's other artwork and (I'm guessing) but it appears that he decided to stretch himself.  I'm not sure I can really describe the art other than it's unique.  It took a couple of issues to really get used to it but once I did, I realized I enjoyed it.

In summary, this is one of those runs in which you can see the creative team showing signs of brilliance before hitting their stride and making magic.  Getting a complete run off ebay isn't cheap but the first dozen issues are plentiful and easy to get.  If you like the strange, then these issues will appeal to you.
Posted by Lee at Saturday, March 10, 2018