Matthew: Year One (1977): Origin of the Comic Collector -- First Comics

It was too serendipitous that my return to blogging for Comics And so closely coincides with my 41st anniversary of collecting comics that I had to make my first post of our reboot about my first comics.  These days my short-term memory seems to be more Swiss-cheesed than Sam Beckett of Quantum Leap. (I couldn't remember the term "sciatica" the day after I suffered from perhaps my first bout with it last week.)  I chalk it up to advanced maturity or my James Bond style sleep schedule (you'll have to dig into the Ian Fleming novels to understand that reference).  Contrast that with some childhood memories, which never disappear.  Even though they may be faded and blurry like an old Polaroid or Fotomat 110 print, at least they're still present.  Fortunately (and I use that term linguistically for style rather than a belief in luck or fortune - "Blessedly" or "Thankfully" would be more accurate, but that would get old real fast),  we have physical evidence and ultra-cool online resources to help clear things up a bit.

The "high tech" (scotch-taped) photo stitch below depicts my original comic collection, then only a few months old circa May 1977. More detailed comments and recollections continue after the break...

First of all, some of these comics actually consist of short stacks.  Why I chose to stack some (Hulk), but not others (Captain America/Fantastic Four) or why I chose to stack newest to oldest (Nova) and oldest to newest (Amazing Spider-Man) in the same photo is a mystery.  I do know with certainty that some of my first series issues are not shown. Avengers #159 and 160 are both absent, which is very strange. Any issues that predated my actual first purchases most have come from my brother or perhaps gotten at yard sale or something, maybe even from trades -- I have no idea.

I've long since considered my first comic book to be Life with Archie #182 (cover date June 1977), which I still own (many of these I still own, but some for unknown reasons are long gone).  With comics sporting a cover date three months after their publishing, many books could have remained on the spinner racks for some time, further obfuscating the timeline.  Thanks to the wonderful website, Mike's Amazing World of Comics, I can now actually see the dates for when books hit the stands.  Although, that factual information can be very challenging to my deep-rooted memories.

Based on Mike's AWC, the publishing date of Life with Archie #182 is March 28, 1977.  Another one of my first books, Archie's Pals N' Gals #114 came out a week earlier.  Little Archie #118 came out on March 1st.  That may be the actual original issue, since I clearly remember getting Archie's first, possibly at the MCV medical center gift shop after visiting my ex-step father's mother, whom I knew as Nana, circa February/March 1977.  But that may have only been on a Sunday, when the gift shop would have been closed - Oh where or where is fact-checking Andy Mangles when you need him (foreshadowing for my upcoming Lou Scheimer Filmation book review)!

Here are some other "remembered" first issues (abridged list) and their publishing dates:

Man, I could browse through that website all day and have more fun than perusing Facebook posts.  Regardless, of the actual first issue, March 1977 certainly fits the timeline, so I'm going to go with it.  And I could have really used this resource when I was developing my 40th anniversary Fred Hembeck pieces, which I posted about six months ago.  I did it the hard way using my PhotoJournal HC, less user-friendly websites, and the actual books.

Above, I put "read" in quotes, because I'm not sure how much reading I actually did back in the first grade.  My vocabulary word list wasn't very advanced back then as this picture from 1977 May 23 illustrates.  That's me in the Wide World of Sports tank top with my best friend at the time, Eric Carter - who I remembered as being my best friend in third grade, not first.  Oh well, so much for my brain cells.  Thank goodness, I never damaged them with drugs or alcohol! 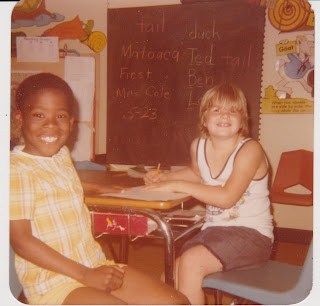 I feel like the first comic I actually read word-for-word, was STAR WARS #19, which came out in October 1978, when I was in third grade, living in Leavenworth, Kansas for the fall semester.  It took like an hour!

I've been wanting to do a write-up like this from the first time I did a Matthew: Year One post back in 2012.  In that one from SIX YEARS ago (sheesh), I depicted my latest Godzilla original art purchase from Godzilla #8.  At the end of it you'll see my 30th anniversary Godzilla pencil drawing done by Herb Trimpe at the Baltimore Comic-Con in 2007.  For the 10th anniversary of that historic event and to celebrate my 40th anniversary (again), I commissioned Joe Staton of Dick Tracy fame to ink it (he used to ink Herb's pencils on the Hulk).  I got a scan of it from Joe this week (writing this on Feb 23rd) and it will arrive in the mail soon -- just in time for my 41st anniversary.  Look at #11 in the original post -- "someday" is now TODAY!  How's that for serendipity.  Here it is in all its glory: 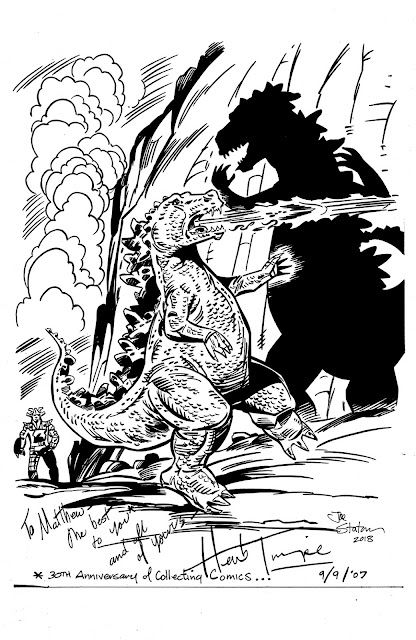 I'm so glad Jim has resurrected this blog again like a favorite comic book character.  It makes comic reading and collecting more fun!  See you back in about a month.  Oh, and Steve Conley creator of the magnificent Middle Age is working on his version inking Herb's pencils.  While Joe matched Herb's pencils beautifully, bringing them to more visible life.  Steve intends to match the style of inks in the comics, including the glowing eyes.  It's going to be awesome too!
Posted by Matthew at Sunday, March 04, 2018