Remembering Billy Graham and When Archie Shared the Same Message

WARNING:  THIS POST CONTAINS EVANGELISTIC MATERIAL, WHICH MAY BE OFFENSIVE (or life changing).


Last week my daughter Evelyn and I had a very special father-daughter outing on her Sweet 16 birthday.  We went to the US Capitol...to pay our respects to Billy Graham.  It was tremendous.  Not only was the weather picture-perfect and unusually warm for February, it was very moving to see his casket inside the Capitol Rotunda. The picture below is a screenshot from the C-SPAN coverage - That's me and her on the far left. 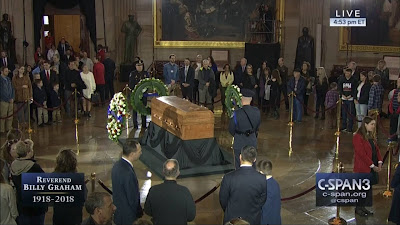 Why did we go? Just to be part of a historic event?  Because we revered him as a church leader? No.  We went to honor a humble servant of Jesus Christ, who was inspiring because he so was faithful in his calling to proclaim the Gospel to the lost souls of the world.  The memorial card shown below sums up his ministry in his own words: 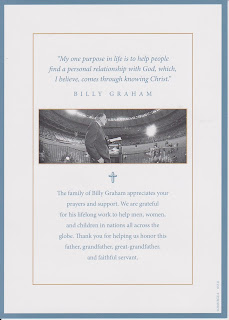 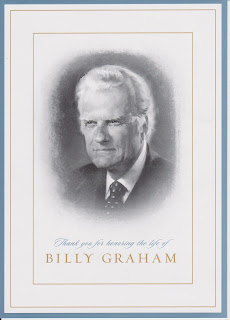 Last Sunday, right before the Oscars began, Fox broadcast an excellent documentary of his life, entitled Billy Graham: An Extraordinary Journey.  I can't seem to get this link to work for me right now, but I hope it does for some of you, because you really should watch it.  To hear his booming voice again (especially in his younger years) express God's love and forgiveness and quote Scripture is thrilling to me, because I know that God's Word doesn't return void (Isaiah 55:11).  I also enjoyed hearing how he desegregated his crusades in the South (and was criticized for it) and the impact his crusades in Eastern Europe had on the end of the Cold War.  The Russians even invited him to a peace conference in the early-80s with intent to use him in propaganda, but God opened a door for him to speak boldly for Jesus.  Again, I highly recommend it even if your intent is only for the history part of it.

In case you think I may have violated Jim's directive that any of our uncensored and diverse views and commentary had to be somewhat associated with comics.  "Fear Not!" I wanted to share with you one of the Spire Christian Comics Archie books from 1973.  Even Elton John was singing about "Jesus Freaks" back then.  Was all of it legitimate or were people just taking up the latest fad?  I'm sure there was a little bit of both, but this comic is the real deal! 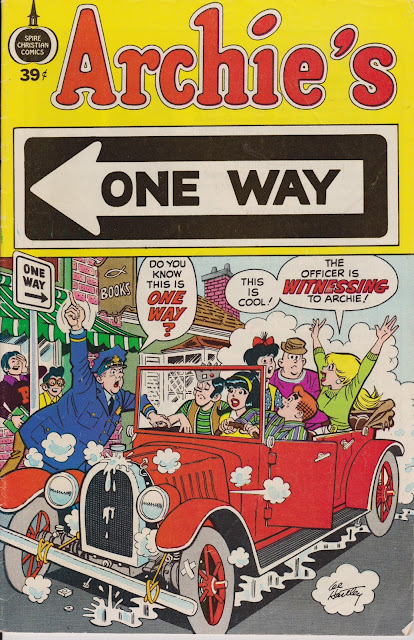 This book as well as all the Spire books were written and drawn by Al Hartley.  According to his wiki bio, he drew a long run of Patsy Walker issues for Marvel and was drawing a "nudie-cutie" strip for a men's magazine, when he became a Born Again Christian and decided to stop.  He was able to license the use of Archie for some of his comics.

The comic consists of a series of short Archie (or his "Pals 'N Gals") focused stories with the typical Archie humor.  There is also a few pages of direct evangelistic material. I started with scanning only a few pages, but I ended up scanning most of the book, because it's better to experience it yourself.  Click on the pictures (AFTER THE BREAK) to be able to read it better.  I apologize in advance if some of the pictures or gaps between text is a little screwy.


The first story, which I didn't scan, is a Jughead tale, where the ravenous teenager enters a Christian coffee house for the sole purpose of partaking of the free food.  However, the message makes him curious to hear more about a different type of "Bread" the can feed his soul.  Then there is a single page of Betty responding to someone who claims not to believe in God.  The next story, "The WORD!" is reprinted below: 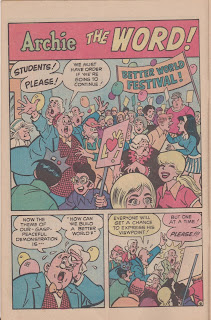 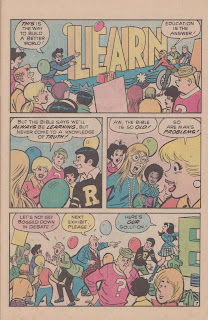 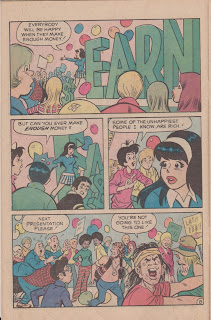 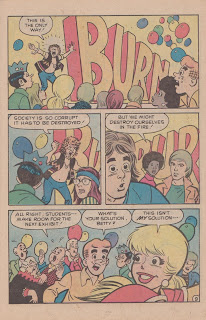 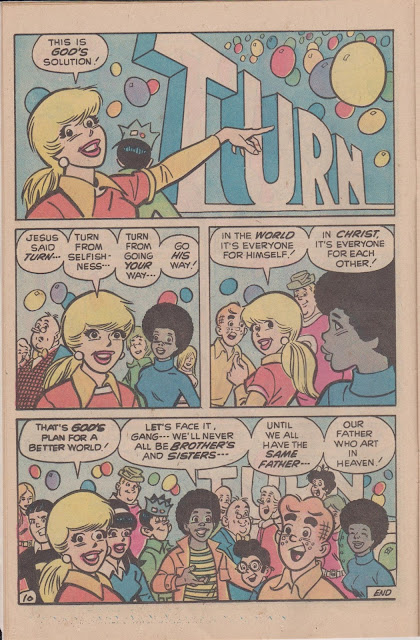 I love the simple, but accurate message in the last panel.  We all want to live in a peaceful utopia, but we need to be part of the same family. The following page is the first all evangelical one.  I think Al is making a brilliant point here: 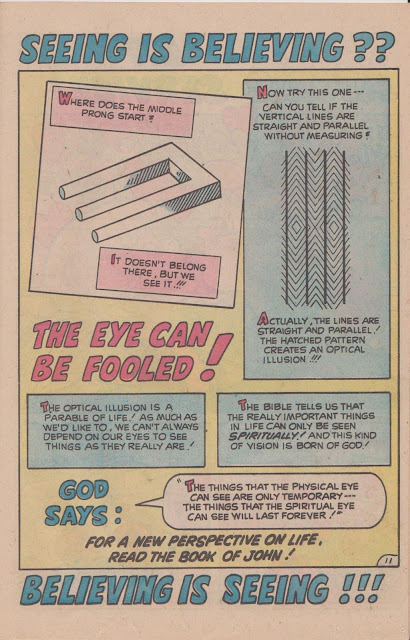 The next tale, also not scanned, is "Lip Service" and it begins with Archie and Betty enjoying their favorite past time, KISSING!!!  Big Ethel arrives in tears and laments her appearance, blaming God.  Betty tells her, "Ethel --- Do you think that God makes mistakes?  God doesn't love us because we're beautiful --- or smart --- He loves us because He MADE us!  And He made YOU just as you are Ethel!  The greatest LOVE AFFAIR you can have is with HIM!"  More is said, but Ethel leaves happy and tells Archie that she has a date with her Bible.  (I probably should have just scanned it too).  Next up is another evangelistic page.  I like how they give you practical advice on what book of the Bible to start reading: 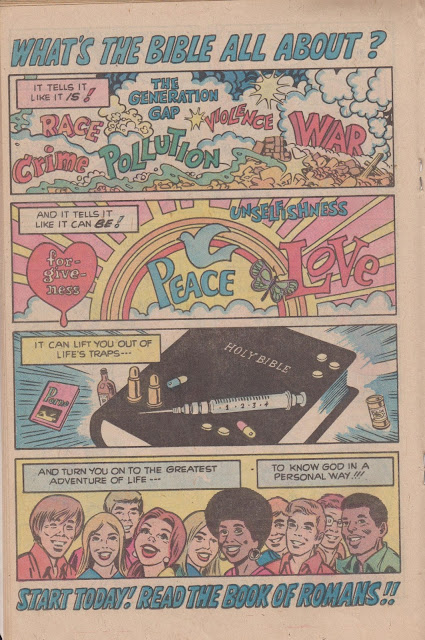 The next story, again unscanned, is "The Prodigal Son!".  Archie and gang pick up a runaway hitch-hiker (it was the 70s).  He's pretty sour on the world, but Betty explains the difference between Faith and Belief in an understandable way using a plane analogy.  They end up dropping him off at his home.  (Actually, if anyone wants to see these other stories, just request it in the comments and I'll edit the post to include them.)  And now the third evangelistic page filled with God's promises (select verses) from the Bible. 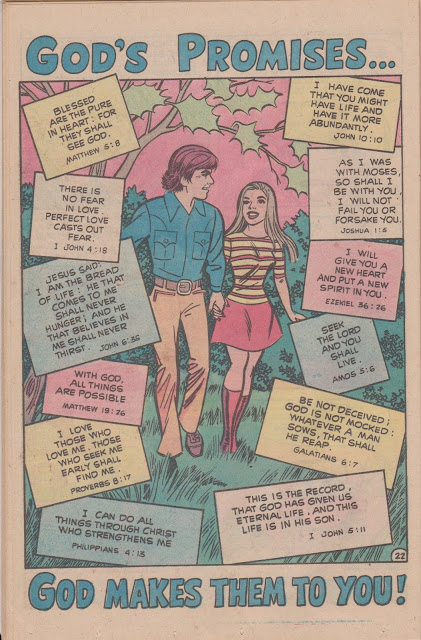 The next story, "Your Body A Temple" is reprinted below.  I asked Jesus into my heart 42 years ago this month and I can testify that the Holy Spirit lives in me.  I'd hate to think of what sort of person I'd be without Jesus.  I probably never would have survived high school during some of my down times (Yes, you can still have troubles as a believer, but I had a power not of my own to overcome them.): 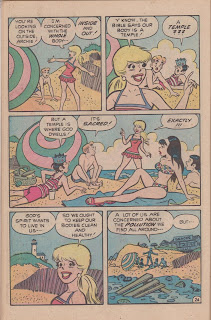 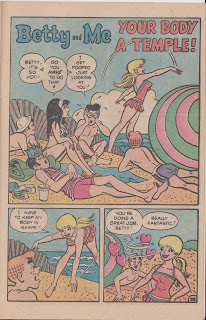 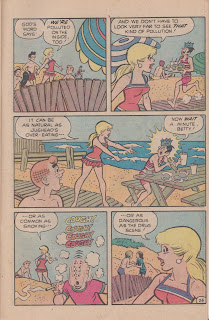 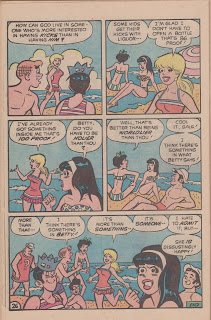 And now Al is getting to the heart of the message in a single page: 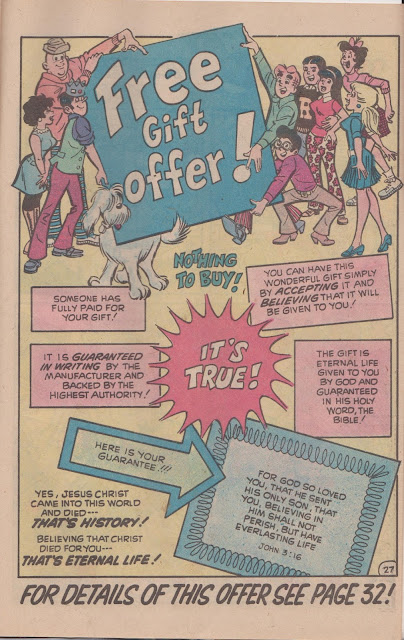 The final reprinted story, "My Father's House!" focuses on a change in Mister Lodge, Veronica's dad.  The first panel of page four of the story is superb, because it highlights a lot of misconceptions about the Christian life: 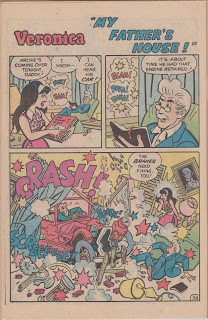 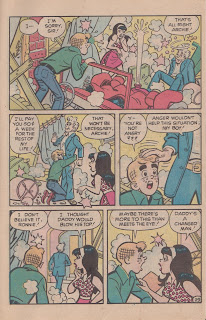 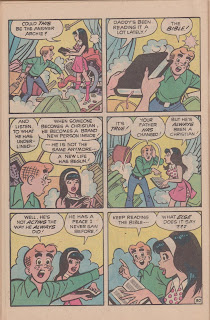 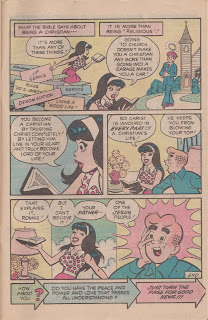 If you've read this far, then you're finally ready for the ultimate question.  The same one Billy Graham asked at the end of each crusade.  "How are YOU going to respond to Christ?" 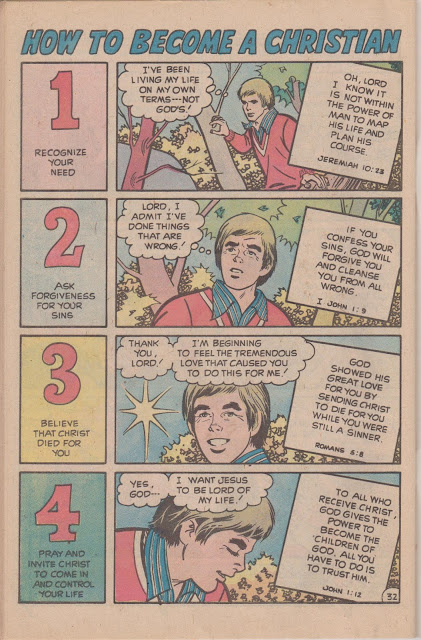 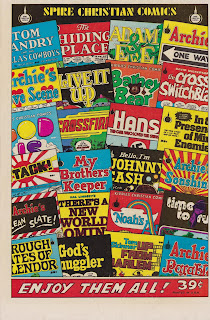 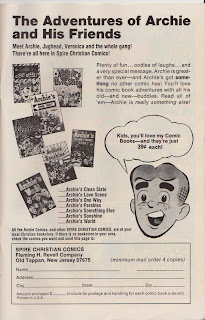 Finally, I give you the inside and "outside" back cover to show you some of the other Spire Christian Comics available.  I have a few and had a few, mostly ones picked up at the Fishnet Christian festivals held in Front Royal, Virginia.  I attended from 1979 to 1991, missing only one year.  Some of the speakers at Fishnet are featured in these comics, many based on their autobiographies or personal stories such as David Wilkerson, Tom Skinner, Corrie ten Boom, etc.  I would love to collect all of these someday.

You know that old Reese's Peanut Butter Cup commercial where two great tastes are great together?  Well, one reason why I love ApologetiX so much is they bring my love of music together with my love for the Bible.  And Spire Christian Comics bring my love of comics together with my love for God. Boy, would I like to get the publishing rights to these books for evangelistic purposes!  An ApologetiX CD and Spire book in every mailbox!

Jim had posted a question about the percentage of "good" people on Facebook last Sunday morning.  Gwen made a good point that our lives are based on what we do (our decisions/actions) and Thomm was astute in saying that most people are a lot worse then they think (I'm paraphrasing here). Well, I was getting a response ready, but couldn't complete it before church that morning. Basically, I believe as Billy Graham preached, that we're all born with the disease of sin.  Thankfully, there is a cure!

Thanks for reading the whole post.  I pray it gives you someone to ponder.

Email ThisBlogThis!Share to TwitterShare to FacebookShare to Pinterest
Labels: Back Issues, In memoriam, Matthew's Musings