Fafhrd and the Grey Mouser

Sometimes there are characters you've heard about for quite awhile, and you might have some inkling of what their story is, but you haven't actually read them.  Well, for me there's a lot of that in the reading world.  Fafhrd and the Grey Mouser are among them.  Their brief appearance and ignominious demise, or at least representations of them, in Fables had been my only experience of the characters.  Appetizers for The Dark Man didn't give me much about them. 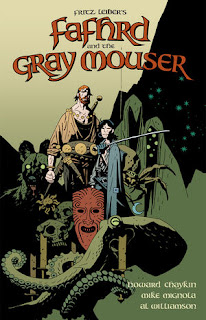 I came across Fritz Leiber's Fafhrd and the Gray Mouser by Howard Chaykin, Mike Mignola and Al Willaimson and figured I couldn't pass up the opportunity to learns some of Leiber's highly regarded stories, especially with pencils by Mignola and inks by Williamson.  Chaykin's been a bit more hit and miss for me on his original material, but with such well known source material I figured he wouldn't stray far.

These are some great stories.  I can see why they've been so influential with subsequent creators like Chaykin and Mignola.  Leiber has a large world that he's created that has a fully fleshed cast, not just it's titular heroes.  Sword and sorcery owes a lot to Leiber, as well as contemporaries Robert Howard and Michael Moorcock.  There are many similarities among the works of the three men, of course, but each had his own style.

This collection of books published by Dark Horse in 2007 has all 4 of the original miniseries books published in 1991.  Opening with the tragic loss of each man's true love soon after their first meeting, running through their self imposed excile from the city of Lankhmar, and into their later years of separation and divergent life courses, the book lays out a sampler course of the lives of our flawed but essentially hopeful heroes.  It can get a bit disconcerting because there are time breaks between segments, but if you remember Leiber told a lot more stories that aren't presented here, it's much more enjoyable.  Chaykin does fill in the blanks ably with contextual story so that it's not hard to figure out the new point in the characters' lives even without the intervening stories.  Not like the old school text boxes in super hero books but with good story.

Of course, one of the best things about this book is that it's all Mignola art.  At this stage I don't see many things published with Mignola on art.  Lots of story, but not much art.  Hellboy and it's companion series feature artists who hew closely to Mignola's style, but they're not Mignola.

As a bonus, there are 16 pages of Fritz Leiber original writing from Swords and Deviltry at the back of the collection.  It's presented as a preview of Book One of a Dark Horse reproduction of Leiber's original works, but it's a stand alone story in itself called The Snow Women.  It present a differnent first meeting than we see in Ill Met in Lankhmar, but maybe that's because they don't recall the meeting of The Snow Women.  I'd like to read a lot more Leiber to find out, though.
Posted by Thomm at Thursday, January 31, 2013