Perhaps an unfair titling of this part as it really is just everything else that I read. Again this week with the 4 football games on my time was limited. It was another 30 book week, so many did not get read. Some of these were good, some were fun and one was none. 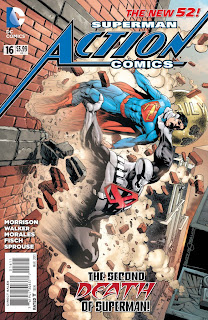 Let’s start with the one book that I thought was horrible this week and one I should have skipped and that is Action Comics #16. This is Grant Morrison at his maddest and most insane. He has multiple time lines and multiple plots and his run on Action is coming to a conclusion. Sadly he lost me a few issues ago. Grant likes to challenge his readers and I believe most of his work demands a closer reading then I have time to give them. Also Grant’s books, at times, fail in being cohesive as chapters and work best as a graphic novel format. I actually sense a great story in the mix of his Action comics run and may pick up the collected works. DC’s new demand of making it monthly no matter what means Rags Morales does not get to be the artist of record and the fill in art is not as strong as Rags. DC needs to let Grant do a story and pick a great artist and not release the story until it is done. I have heard no buzz on this book at all though and that gives me pause as I know others will devote more time to reading his work. If it was epic I would have thought I may have seen evidence of positive reviews. At this point it appears Grant is pulling away from super hero work and this maybe one of his swan songs on the genre. Maybe when the run is on sale I can get the trades or hard covers. The bottom line is as a solo issue I found it to be confusing, convoluted and an impossible read.

Next up is Thunderbolts #3 by Daniel Way and Steve Dillon. General Thaddeus (Red Hulk) Ross’ group of cutthroats and assassins banded together to right wrongs in the world. The best part of the book was (SPOLIERS) the Punisher putting a bullet to the head of the Leader. Ross was charging up the Leader for information he needed and had convinced Deadpool this is not a bad idea. Deadpool said the Punisher wouldn’t care and he was right. It was an awesome ending and so in character for Frank Castle, it made the book.

The Human Bomb #2 (of 4) by the writing team of Jimmy Palmiotti and Justin Gray with art by Jerry Ordway is just a great solid comic. The rebuilding the Freedom Fighters in the new DCU continue. I think these books are way under the radar but are an excellent example of starting a group over by first building each character and giving them new origins. This is an example of how DCU would have been better served in their hard reset of their Universe.

I picked up the Green Lantern New Guardians Annual #1 since it was written by Keith Giffen. Giffen is usually very inventive and has fun with his books. I’m glad I did as it was really an introduction for a new series by Giffen called Threshold. In this book a renegade Green Lantern is now the player in an alien planet’s game of Running Man, where everyone on the planet is after you for a monetary prize. I never get how a Green Lantern can just go off on their own and that the Guardians could not shut down the power. Still one should not press too hard on comic logic and just enjoy the story. This was a good introduction for the series; just not sure starting a series in an annual of another series is the best idea. As long as issue #1 of Threshold stills sets the stage it should be fine.

Earth 2 #8 by James Robinson, Yildiray Cinar and inkers Ryan Winn and Ruy Jose was a decent comic. It introduces us to a new version of Fury, a long forgotten DC character who is the daughter of Wonder Woman. In this new version she is the adopted daughter of Steppenwolf and will initially be a villainous character. The problem is that the world building going on with this book is taking way too long. We have nine issues (including issue #0) under our belt and the stage is still being set up. DC either needed to a two a month thing with this book or should have a companion series to help flesh out the characters. At this point I’m getting bored waiting for a new form of the JSA to every take shape.

Avengers Arena #3 by Dennis Hopeless and Kev Walker was okay. As I hardly know any of these characters and all are marked for death, the story needs to move fast. It seemed like it was going right when Darkhawk was killed, but the next issue blurb shows Darkhawk on the cover. Don’t tease killing off these characters, either do it or don’t do it. I have a nasty feeling there is an escape that shows us that characters are not really dead. Plugged into the Matrix or something and only their Avatars are being killed. At that point the fun of the series disappears and it will feel like an “I got you” from Marvel. I hope I’m wrong and will hang on for a few more issues.

The Legend of Luther Strode #2 (of 6) by Justin Jordan and Tradd Moore is just a great ultra-violent and fun series. Jordan’s second arc is just as good as the first and Moore’s art matches the maniac nature of the story. The twist at the end of this issue was good and where Luthor goes from here is anyone’s guess. Jordan is now doing work for DC, but this is his best work and a highly entertaining series.

The last book is Shadowman #3 by Justin Jordon (hey he is back already) and Patrick Zircher as writers and Patrick as artist with Brian Reber as color artist. I mention the colorist because all the Valiant books are very well done and the coloring is top notch throughout the line. This book with so much of it being dark was especially challenging as the colors kept the right tone but still allowed the art, which was great, to still be seen. Often these super dark scenes can be so poorly done that the art (or in the movies the action) can’t be seen. Shadowman itself is a good series as we are slowly developing him becoming the new Shadowman. This is a very good series from Valiant.

And so we come to another conclusion of the week in review. Join us again nice week for more fun and frivolity.
Posted by Jim at Tuesday, January 15, 2013