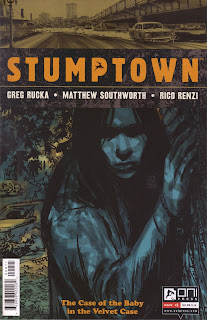 Stumptown #5 is the conclusion to the second story of private investigator Dex Parios by Greg Rucka, Matthew Southworth and Rico Renzi with Matthew Southworth on colors. It was a great story and if I’m any judge of things this book is a true labor of love.

From Greg Rucka’s wonderfully structured story to his essays on why a private eye is an great character to use for stories, the entire series has read like a true graphic novel. Like all great ongoing characters now that we are on the second story of Dex we get a subtle hint of problems to come. People are coming for Dex due to her putting her nose where some believe it does not belong. Bottom line is that I believe this is one of those series that I will have to buy the hard cover collections since I ship all the comics out to others. It is a great series and we are only two novels in.

I called it a labor of love because I sense the creators are pouring their hearts and souls into the book. Greg is a great writer, but this is some of his best stuff. Matthew continues to grow as an artist and becomes more and more impressive with each succeeding issue. In the first arc I felt his work was good, but now it is coming together and is flat out impressive. Last issue’s car chase was phenomenal and this issue is very quite in comparison but he expresses so many emotions with the characters via body language as well as the actual facial expressions. It speaks to a lot of thought going into each and every page. In addition the characters are all distinctive, the story flows from panel to panel with an ease that many artist never achieve.

Also the coloring is excellent. It is used not only to color but to light the scenes, especially in the dark scenes. Often a colorist can muddy the waters (at times to hide an artist’s flaws) but here it plays with the dark scenes in a way that would make a movie lighting director proud. The one moment in the coloring that blew me away was when the cops showed up lights flashing. The strobe effect of the police lights played against those pages just like it would have if you were standing there. I have never seen anyone else pull that off and it was a great touch.

I’m not talking about the actual plot because the whole story of a stolen guitar turned into so much more that telling you the ending would hurt some of the joy of reading this book and that’s what I want people to do. Go out and buy this book and pick up the first one because Rucka and Southworth have pure gold with Dex Parios.