Different comics give me different impressions as to planning. Some books have a clue what they are going and how to get there. Chew was planned as a 60 issue series, Sweet Tooth was a complete story, many series meander. The unlimited nature of some series create a problem in that the demands of producing a monthly book causes a writer to just start producing stories and the book loses focus and direction. I have recently re-read the first 30 books of the Namor series by John Byrne. The book started off strong and then Byrne layered in various plots and tried to wrap up some old Iron Fist stories. By the time I get to the early Jae Lee art issues I no longer cared about a story that had gotten lost. If I was an editor I would ask for a five year plan or at least what your first three story arcs are for a series, just to make sure the book had a sense of direction. These four books seem to have gotten it right. 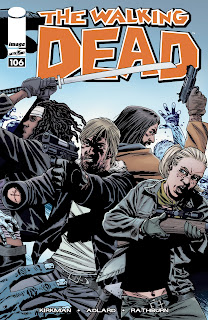 First up is Walking Dead #106 by Robert Kirkman and Charles Adlard. My guess is that Kirkman had no clue where he was going long term with this book when it started. This was an independent endeavor and the chances of this type of book making it this long were essentially zero. As the book garnered success I believe that Kirkman started to get an idea where the story was going. This to me is a classic case of the characters writing themselves. The consistency of one writer handling a book (and the creator owned aspect of same) allows the book to find its own beat and rhythm. I think once Kirkman got a handle on the characters each story sort of presents itself. The book gained a direction as our lives gain a direction due to our experiences. The current story line certainly seems to give credence to that idea. Carl went off half cocked to take out Negan. In this issue he is both still a child and still the bad ass. Negan is a megalomaniac who likes Carl but must put him in his place. Rick is a fighter and only has his son to keep his tenuous hold on his sanity in check. This issue those elements lead Rick to go after Negan and Negan to do something to Carl. The meeting of Rick and Negan at the end leaves us with the cliff hanger of what happened to Carl. I may not know what happens next, but Kirkman does and he will let the story tell itself. This is a great way of doing an unlimited series. As a writer you put the characters in different situations and let the story tell itself (in a sense). I feel like Walking Dead has gotten that type of rhythm and Kirkman has an idea what each next story beat maybe but allows the characters to dictate the pace. 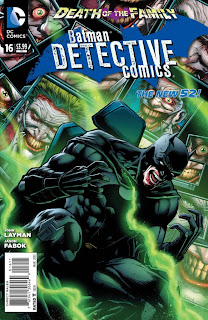 Detective Comics #16 by John Layman and Jason Fabok is by one of my favorite writers. John Layman appears to approach each project with an idea of where he is going and can either do a short concise story (Godzilla Gangsters and Goliaths), long form story (Chew) or approach an unlimited series in different ways (Mars Attacks) and Detective.  This particular issue is a cheat because it is being labeled as part of “Death of the Family” but it is only tangentially tied to the book. Instead Layman, since he took over the series a few months ago, has been crafting the buildup of a new Gotham kingpin the Emperor Penguin. In fact the backup story showing EP taking over for the Penguin was the best part of the book. Yet Layman is giving us a Joker themed story in the main book that is not involved with the Joker yet gives us an idea of how the EP and others are trying to use the fear of the Joker to their own advantage. Writing for a major company means that you have to deal with editorial mandates and sometimes interrupt what story you are trying to tell. John instead uses that interruption to tell a Batman story but still run his plot in the book. Layman allows the cross-over aspect to be an element of the story and not to destroy the flow of his story. I think Layman knows where he is going and is skillful enough to incorporate any curve balls he may get from an editorial perspective. I’m also betting he understood the nature of the beast going in to this job and was prepared to flex his story as needed. 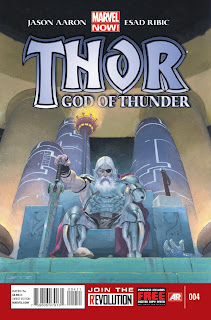 Next up is Thor #4 by Jason Aaron and Esad Ribic. Jason did a great job with Scalped and I’m pretty sure that he had the vast majority of that story in his head the day he started the book. Some of his work for Marvel has seemed a little more helter skelter, but when your boss asks do you want to write a book, you often need to say yes depending on where you are in your career. Some of that work was enjoyable and some of it was average at best. Thor is an excellent series and seems to have a firm direction or at least Jason appears to have the first few storylines laid out already. The three generations of Thor, past, present and future are all facing Gorr the God Killer. Each issue flows from generation to generation and this issue it appears show present Thor is out to save future King Thor. It has an epic feel to it. Between the great art and the narrative flow of the book you feel like Aaron is telling us this story around a campfire and creating new mythology.  Heck I would not be surprised to find out later that Jason has a complete story in mind that runs 30 or more issues where the first and last arc act as the completion of a circle. I could be wrong, especially if the next issue has a definitive end to Gorr, but it does not belie the fact that Jason has a plan for where he is going with this book and it shows. 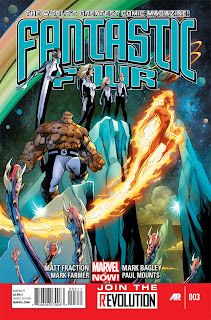 The last book is Fantastic Four #3 by Matt Fraction, Mark Bagley and Mark Farmer. Actually you can include the FF series in this. It is very evident that Fraction has a one to two year story to tell about the Fantastic Four and Reed’s search for a cure to the fact that their powers are slowly killing them. In the FF the beats of that story have yet to be fully realized but an oddly transformed Torch like character has reappeared announcing the FF is dead. It is very exciting to read this book like it has not been in a long time. Hickman did a nice job on the book and came into the FF with a plan, but then it appears he was forced to stay too long and the book lost focus. Matt Fraction is building off what come before, but he is crafting his own plot and direction. Mark Bagley with Mark Farmer on inks is making this book look great. The outer space adventures of scope of the Fantastic Four story have a Lee/Kirby feel to the story with a more modern and adult (not xxx adult) writing that is the hallmark of modern comics. I’m still perturbed by the faux FF being put together for the four seconds the real FF was going to be gone, but it has all worked out and I’m now signed up for both series and want to see what Fraction’s story is all about.

In fact I think a lot of the original Marvel Now stuff was probably done based on pitches by various writers, so that each book had a game plan for where it is going. Of course the beginnings of a story can always feel exciting as the energy level is high and everyone is trying to knock it out of the park. At time progresses enthusiasm gives way to it still being a job and the dream house that looks great on paper still needs to be built. Here is to hoping all these books continue to deliver.