Indies Previews for March Part 2 of 3 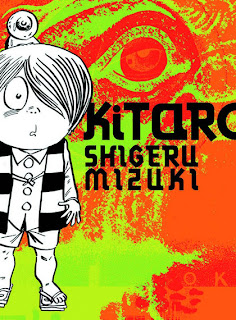 Drawn And Quarterly
Kitaro GN by (w/a/c) Shigeru Mizuki
Meet one of Japan's most popular characters of all time - the one-eyed monster boy Kitaro. He's just like any other boy, except for a few small differences: he only has one eye, his hair is as an antenna that senses paranormal activity, his geta sandals are jet-powered, and he can blend in to his surroundings like a chameleon. Oh, and he's a three hundred and fifty year old yokai (spirit monster). With all the offbeat humor of an Addams Family story, Kitaro is a light-hearted romp where the bad guys always get what's coming to them. Kitaro is bestselling manga-ka Shigeru Mizuki's most famous creation. The Kitaro series was inspired by a kamishibai or paper theatre entitled Kitaro of the Graveyard. Mizuki's series was created in 1959, and first appeared in Shonen comics magazine for boys, but quickly became a cultural landmark for young and old alike. Kitaro inspired half a dozen TV shows, plus numerous video games and films, and its cultural importance cannot be overstated. Presented to North American audiences for the first time in this lavish format, Mizuki's photo-realist landscapes and cartoony characters blend the eerie with the comic. 432 pgs, PC, 6.5x8.75, $24.95 See a long preview here.
Lee: I was gonna pass on this until I realized that Mizuki wrote Nonnonba (see long review here). Nonnonba was sooooo good it made this book a buy on sight. It didn’t hurt the previews looked great too.
Thomm: This looks great. It reminds me of Native American trickster stories of Raven or Wolf. Love this kind of cultural stuff. 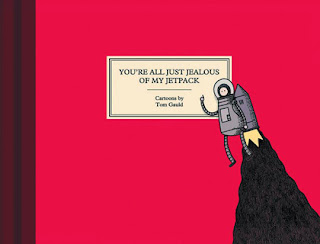 You're All Just Jealous of My Jetpack HC by (w/a/c) Tom Gauld
A new collection from The Guardian and New York Times Magazine cartoonist. New York Times Magazine cartoonist Tom Gauld follows up his widely praised graphic novel Goliath with You're All Just Jealous of My Jetpack, a collection of cartoons made for The Guardian. Over the past eight years, Gauld has produced a weekly cartoon for the Saturday Review section of Britain's most well regarded newspaper. Only a handful of comics from this huge and hilarious body of work have ever been printed in North America - exclusively within the pages of the prestigious Believer magazine. You're All Just Jealous of My Jetpack distils perfectly Gauld's dark humor, impeccable timing, and distinctive style. Arrests by the fiction police and fictional towns designed by Tom Waits intermingle hilariously with piercing observations about human behavior and whimsical imaginings of the future. Again and again, Tom Gauld reaffirms his position as a first rank cartoonist, creating work infused with a deep understanding of both literary and cartoon history. 160 pgs, FC, 8x6, $19.95 Visit the artist here and read several strips.
Lee: You can read many, many examples on Gauld’s website so you can determine if you like this or not. It reminds me of The Far Side and Non-Sequitur.
Thomm: That’s my kind of reading. A jaundiced world view is a very funny thing. 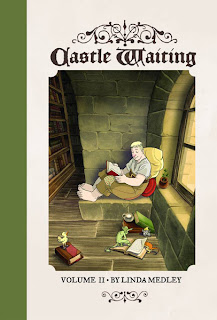 Fantagraphics Books
Castle Waiting Vol. 02 HC (definitive edition) by (w/a/c) Linda Medley
The Definitive Edition! Originally released in a slightly shorter version in 2010, this new edition of Linda Medley's sublimely drawn fantasy includes over 60 pages of brand new material, and the entire book has been re-lettered in a livelier, more inviting style for an even more engaging reading experience. 456 pgs, B-W, 5.75x8.25, $29.99
Lee: This is another wtf book for me. I bought the LAST Castle Waiting Vol 2 hc. LOVED IT! Girl LOVED IT! Now they republish it with an additional 60 pages????!!!! It feels like a giant FU to the fans that have actually supported this series since the start. I remember when people b*tched about Scott Pilgrim in color. All this does is make me wait even longer on Fantagraphics collections because there’s a chance I can get a better one that I will want more later.
Thomm: I haven’t read any of this and it’s hard to say whether it’s any good from that promo. Lee’s promo is far better in support of it, except for the part complaining about the FU.
Lee: BUT, in case you haven’t read it yet… it’s fantastic and I can’t recommend it enough. Or if you want to buy my copy for $10 let me know so I can go buy this one…
Thomm: Now why am I going to waste $10 on an inferior edition when I can get this one? 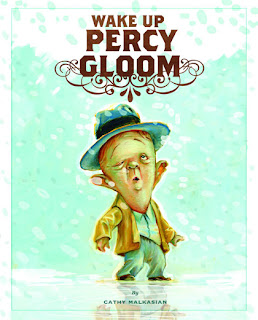 Wake Up, Percy Gloom HC by (w/a/c) Cathy Malkasian
Cathy Malkasian's follows up to her 2007 graphic novel Percy Gloom continues the adventures of the small man with a light-up head. Percy goes on a quest to locate his mother and encounters many inspired inventions and characters. Suitable for all ages, Malkasian's lush pencil drawings, surreal humor, absurdist characters and stunning visual storytelling ensure that fans of the first graphic novel will find the sequel just as fantastical, touching, and hilarious. 200 pgs, two color, 8x10, $24.99  Visit the official Percy Gloom site here.
Thomm: Like Rudolph with a whole head? Probably doesn’t have the same lessons of Rudolph that bullying is fine and your victim will be more than happy to help out when you’re in dire need of his assistance. Looks like an interesting read.Lee:  I have Malkasian's first Percy Gloom.  I'm not sure if I read it or just skimmed it.  It was around the time I went to France so it's all kinda fuzzy.  I do remember really liking what I saw so I am recommending this. 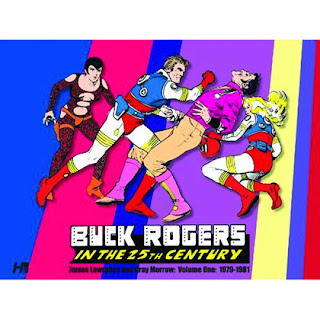 Hermes Press
Buck Rogers in 25th Century: Gray Morrow Years Vol. 01: 1979-81 by (w) Jim Lawrence (A/c) Gray Morrow
With the success of the Buck Rogers TV show the New York Times Syndicate decided to revive the classic Buck Rogers newspaper feature and to give it a contemporary sci-fi treatment. The feature, which was unrelated to the television show, offered the artwork of Gray Morrow with scripts by Jim Lawrence. Volume One offers a full two years of the strip with the black and white dailies and full color Sundays. This material has never before been offered in its original version and is taken from the original press proofs. This volume reprints the Buck Rogers Daily and Sunday strips which premiered on September 9, 1979 with artwork by Gray Morrow and scripts by Jim Lawrence. 240 pgs, PC, 9x12, $49.99  Go here for a blog dedicated to Gray Morrow, and read an early Zatanna strip that he drew too.
Lee: Hummm, what to do? What to do? Gray Morrow was one of the great photo realist artists of his generation. His layout and design skills are fantastic. His figure work is impeccable. But Buck Rogers in the 70’s was as camp as camp goes. The art will be great but I have no clue if the story will be any good. I’ll probably pass on this even though I am very interested but here’s hoping that Hermes can reprint the daily strip of the Black Hole movie that Kirby drew in the 70’s.
Thomm: This may actually be good. It says in the promo that it really has little to do with the abysmal, if popular, TV show, and just took advantage of the show’s popularity. If it harkens back to the original publications, it’s worth a look. 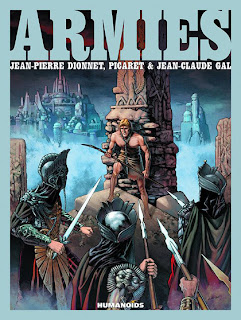 Humanoids Inc
Armies HC by (w) Jean-Pierre Dionnet (a/c) Jean-Claude Gal
For fans of A Game of Thrones! A collection of stories featuring an unstoppable army and an indomitable hero, Arn, all amid the backdrop of barbaric, medieval lands as staggeringly bloody as they are beautiful. Featuring the writing of Jean-Pierre Dionnet (one of the founders of Métal Hurlant magazine) and the stunning art of Jean-Claude Gal (Diosamante), Armies is a true classic of Franco-Belgian Heroic Fantasy, large portions of which are available in the English language for the first time. 184 pgs, FC, 9.5x12.5, $34.95  A huge retrospecitive of Gal here, well worth it just for the pictures alone!
Lee: I’ve read Gal’s other book Diosamante so I can tell you this book with be gorgeous. Huge mean ala Corben. Actually huge women ala Corben too. It’s a Euro style Conan book if you like that.
Thomm: Hey, it’s the return of Franco-Belgian to our reviews. I’m not feeling any new sort of story here that would draw me in. I’m at saturation point for Conan as it is. 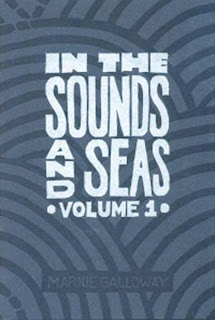 Monkey Rope Press
In the Sounds and Seas GN by (w/a/c) Marnie Galloway
In the style of ancient poems of myth and monsters, In the Sounds and Seas is a wordless, densely illustrated graphic novel that begins with an invocation to the singers of the story. The protagonist learns she is part of the story, and means to sail to the edge of the sea to find the singers and join their song. 56 pgs, B-W, 6x9, $12.95 Visit the artist and see previews here.
Lee: This is such a frustrating book!  If I hadn’t been looking closely, I would never have realized that in Nov 2012 Galloway won the Xeric award! That’s huge for indie creators. And, I try to always highlight the Xeric’s because the material is usually so good. I'm frustrated because I love to promote this material and I almost missed it.  Anyway, this will be worth the investment.
Thomm: I’m intrigued by the concept of a wordless book about singers. How do you know they’re singing? Hmm…

The conclusion tomorrow...
Posted by Lee at Thursday, January 24, 2013