Lee: After a slow December, the previews are really picking up. As always there’s lots to like.
Thomm: And lots to be ambivalent about. 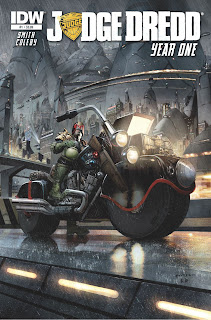 Judge Dredd: Year One #1
Matt Smith (w) • Simon Coleby (a) • Greg Staples (c)
“The Long Hard Road” begins here! In an all-new adventure from Joe Dredd’s early days as a Mega City-One Judge, writer (and Eagle-award-winning 2000 AD Editor) Matt Smith presents a tale where “all the young juves, carry the news,” only in this case, the news is delivered with a lethal blow!
Lee: And let the flooding of the stands begin. I love Dredd more than most but two books in one month is a little much, even for me. I’ll check this out because I love Coleby’s art but I don’t know how long I am going to stay.
Thomm: Have a nice visit. Not a Dredd fan so this has no appeal to me.

So Judge Dredd didn't do it for Thomm... see how well I was able to sell Thomm on more books below the break. 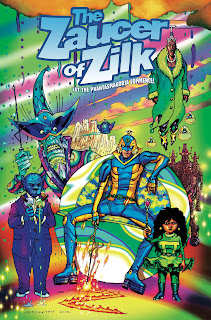 The Complete Zaucer of Zilk
Brendan McCarthy / Al Ewing (w) • McCarthy (a/c)
FC • 64 pages • $6.99
Get Zaucy! After instantaneous sell-outs of the single issues, IDW is proud to announce this special reprint of the collaboration with 2000 AD and Rebellion Publishing, The Zaucer of Zilk! Brendan McCarthy & Al Ewing’s phantasmagorical psychedelic extravaganza from beyond the fringes of imagination features an inter-dimensional magician who travels across the realms to save his number-one fan from the dank clutches of arch-nemesis Errol Raine, as visualized by the brilliantly surreal artist McCarthy!
Lee: WWWHHHHHEEEE doggie this is gonna be good. I’ve heard this is great psychedelic fun! I love Ewing from his work on Jennifer Blood (Yes, it’s really good) and Zombo and McCarthy is an absolute insane artist. This is not to be missed.
Thomm: Eh, I’m 0 for 2 so far. Some psychedelic reads are a lot of fun. Others are just a slog to get through and a chore to understand. I’ll pass. 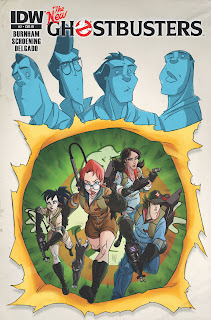 Ghostbusters #2
Erik Burnham (w) • Dan Schoening (a / c)
FC • 32 pages • $3.99
The ghost of a notorious killer has begun to haunt New York, and The New Ghostbusters have to stop him before he can pick up where he left off! Meanwhile, the Original Ghostbusters compare notes—trying to figure out where they are, and how to get home...
Ghostbusters, Vol. 4: Who Ya Gonna Call?
Erik Burnham (w) • Dan Schoening (a / c)
TPB • FC • $17.99 • 104 pages
Lee: Is anyone reading this series? There’s a couple of reviews out there which are positive so that gives me hope, but I don’t actually know anyone who’s read an issue. Burnham and Schoening have been the creative team for over a year so they must be doing something right. I just wish the trades weren’t so expensive otherwise I would gladly give it a try.
Thomm: Is this still a comedy enterprise? Originally this was a very funny movie. The promo for the single doesn’t indicate any humor. 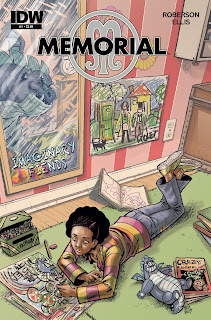 Memorial: Imaginary Fiends #1 (of 3)
Chris Roberson (w) • Rich Ellis (a / c)
FC • 32 pages • $3.99
Return to the world of Memorial in “Imaginary Fiends,” an all new 3 issue series! The fantasies and fears that seem so real to children are often forgotten in adulthood. But after the events of the first Memorial miniseries, forgotten memories are being recovered all over the world. Can those lost fears and fantasies be far behind? Brought to you by Chris Roberson (Edison Rex, iZombie), Rich Ellis (Stars Below, Twilight Zone), and Grace Allison (Wander).
Lee: I guess the original series did well enough to merit a second. Thomm’s the Roberson fan so I’ll let him tell us if this is any good.
Thomm: I did enjoy the original series. Truthfully, the original seemed like a set up to launch the kind of stories being presented here. I’ll be on board to see where it’s going. The original book had some similarity to Fables in that it used a lot of well established (public domain) story characters, but an entirely different take on those characters and their world. 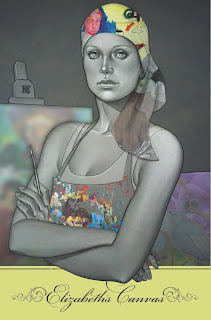 Elizabeth’s Canvas
Mark Waid, Gregg Hurwitz, Harlan Ellison, Chris Ryall, Scott Tipton, Jud Meyers (w) • David Messina, Claudia Balboni, Ryan Benjamin, Sara Pichelli, Elena Casagrande, Todd Harris (a) • Jenny Frison (c)
FC • $17.99 • 104 pages
Fighting cancer isn’t just a struggle of the body. It’s also a fight with the heart, and the soul, and the spirit. The non-profit organization Elizabeth’s Canvas has been helping with that struggle by providing cancer patients, survivors, and their family members with art, photography, dance, and writing classes, at no charge, so that they can better cope with their symptoms and improve their well-being. Elizabeth’s Canvas classes are offered inside and outside hospitals, and are grounded in the belief that the creative process can strengthen the spirit and empower the mind.
Now, Elizabeth’s Canvas, IDW Publishing and Blastoff have come together to create this graphic novel, in which comic creators from across the industry interview the people behind the struggle with cancer -- the patients, the nurses, the survivors, the researchers – and tell their stories, tales of defiance, perseverance, dedication and triumph. All proceeds from the sale of the graphic novel will go to further fund and grow Elizabeth’s Canvas’ efforts.
Lee: All proceeds go to cancer research do I need to say more? I lost a friend to cancer this past year so I know I am buying a copy.
Thomm: Beyond the good deed in buying this, there’s a good group of writers, especially Waid and Ellison. I’m guessing they’ll steer well clear of pity and tell the stories of the patients well. 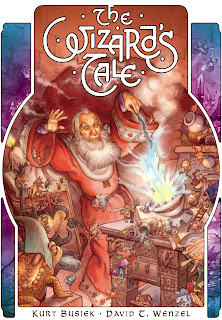 The Wizard’s Tale
Kurt Busiek (w) • David T. Wenzel (a / c)
FC • $19.99 • 144 pages • 7” x 11”
Welcome to the Land of Ever-Night. Bafflerog Rumplewhisker is an evil wizard, from a long line of evil wizards. It’s his job to maintain the darkness spells that keep his corner of Ever-Night as dark and gloomy as the rest of it, and to find the long-lost BOOK OF WORSE, which holds magical spells that can crush the forces of goodness and light forever. There’s only one problem—his heart’s just not in it. Master storytellers Kurt Busiek and David T. Wenzel invite you to join Bafflerog and his companions–Gumpwort, an enchanted toad who was once a wizard himself, and Muddle, the third son of a woodcutter who’s convinced he’ll one day be king–as they make a journey that may mean the end of everything. Or maybe... it could mean something else.
Lee: I got my daughter the hc version of this for Christmas. I knew it was good but I didn’t know it would be great. The art is fantastic and the story has enough for kids of all ages. It’s flat out fun and Busiek at his best.
Thomm: I’m not a Busiek follower but the promo here sells it really well. The names in the cast and the Book of Worse have me very interested in seeing this one. 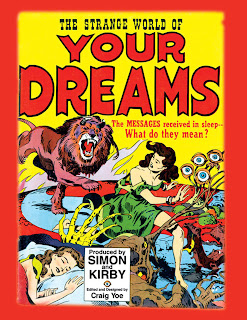 The Strange World Of Your Dreams: Comics Meet Sigmund Freud and Salvador Dali
Joe Simon / Jack Kirby (w /a) • Kirby (c)
HC • FC • $29.99 • 144 pages • 8.5” x 11”
The complete 1950s comics in this innovative and rare series are lovingly restored for this large format full color hardback. Produced by the greatest team in the history of the Golden Age of Comics, Simon and Kirby–this book is a dream come true! Save big bucks on your psychiatric bills, get this beautiful economically priced–and fascinating–book instead! Edited and designed by Eisner Award winner Craig Yoe. I’m afraid our time is up...
Lee: Did you say it’s an oversized Kirby reprint? I’m sold! It doesn’t hurt that this should be thoroughly amusing for all the wrong reasons. Even thinking of Joe Simon writing this makes me snicker. This should be fun.
Thomm: Bizarre fun, from the source material to the adaptors. I wonder whose idea this was originally? Who was the intended market?

Lee: It’s all about the Zaucer of Zilk, and its’ companion book Kirby does psycho analysis. It’s just that kind of month.
Thomm: It’s Memorial and Elizabeth’s Canvas for me, though The Wizard’s Tale is a strong candidate, too. A weak start on the selections, but a strong middle and bizzarro finish. Entertaining bizzarro, so that’s good.
Posted by Lee at Wednesday, January 09, 2013